A Bounce in Expectations Pushed Consumer Sentiment Up in Early April 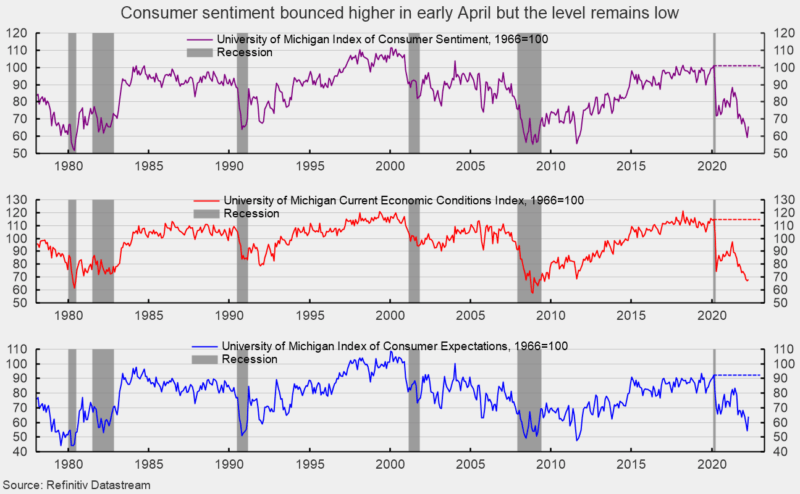 The preliminary April results from the University of Michigan Surveys of Consumers show overall consumer sentiment bounced higher in early April after hitting a multiyear low in March (see top of first chart). The gain was almost entirely due to a jump in consumer expectations for the future. The composite consumer sentiment increased to 65.7 in early April, up from 59.4 in March, a gain of 6.3 points or 10.6 percent. The index is still down 35.3 points from the February 2020 peak.

The current-economic-conditions index rose to 68.1 from 67.2 in March (see the middle of the first chart). That is a 0.9-point or 1.3 percent gain for the month but still leaves the index with a 46.7-point drop since February 2020.

The second sub-index — that of consumer expectations, one of the AIER leading indicators — jumped 9.8 points or 18.0 percent for the month, rising to 64.1 (see bottom of first chart). The index is still off 28.0 points since February 2020.

All three indexes remain below the lows seen in four of the last six recessions (see first chart).

According to the report, “Nearly the entire gain was in the Expectations Index, which posted a monthly gain of 18.0%, including a leap of 29.4% in the year-ahead outlook for the economy and a 17.2% jump in personal financial expectations.” The report goes on to add, “A strong labor market bolstered wage expectations among consumers under age 45 to 5.3%-the largest expected gain in more than three decades, since April 1990. Consumers still anticipate that the national unemployment rate will inch downward, acting to improve consumers’ outlook for the national economy.”

The one-year inflation expectations was unchanged at 5.4 percent in early April, the highest level since November 1981. The one-year expectations has spiked above 3.5 percent several times since 2005 only to fall back (see second chart). The five-year inflation expectations remained unchanged at 3.0 percent in early April. That result remains well within the 25-year range of 2.2 percent to 3.5 percent (see second chart).

According to the report, “Perhaps the most surprising change was that consumers anticipated a year-ahead increase in gas prices of just 0.4 cents in April, completely reversing March’s surge to 49.6 cents. Retail gas prices have fallen since the March peak, and that fact was immediately recognized by consumers. The shift in gas price expectations may be partly due to Biden’s announced release of strategic oil reserves and the relaxing of some seasonal EPA rules.”

The report adds, “Nonetheless, the April survey offers only tentative evidence of small gains in sentiment, which is still too close to recession lows to be reassuring. There are still significant sources of economic uncertainty that could easily reverse the April gains, including the impact on the domestic economy from Putin’s war, and the potential impact of new covid variants.”

The rebound in consumer sentiment, particularly in future expectations, may have been a knee-jerk reaction to lower gas prices. Economic risks remain elevated due to the Russian invasion of Ukraine, the start of a Fed tightening cycle, and continuing waves of new COVID-19 cases. The ramping of negative political ads as the midterm elections approach may also weigh on consumer sentiment in coming months. The overall economic outlook remains highly uncertain.

This article, A Bounce in Expectations Pushed Consumer Sentiment Up in Early April, was originally published by the American Institute for Economic Research and appears here with permission. Please support their efforts.