A World Bereft of Statesmanship 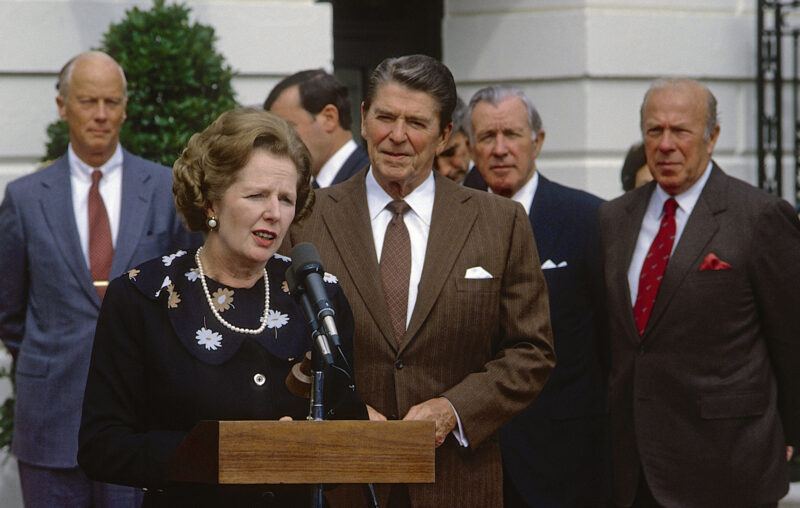 Most periods of Western history have their statesmen. It’s hard to imagine the late-eighteenth century absent William Pitt the Younger or the mid-twentieth century without Dwight Eisenhower.

Looking at our present political landscape, our time is bereft of individuals of similar stature. The word “statesmanship” doesn’t leap to mind these days when we think of places like Washington D.C., Jerusalem, Brussels, London, Paris, Berlin, or the Vatican. We live in the world of Justin Trudeau and Jacinta Ardern—not George C. Marshall and Konrad Adenauer, or, for that matter, Ronald Reagan and Margaret Thatcher.

Being a statesman involves transcending everyday politics but without abandoning this realm altogether. Statesmen cannot ignore the wearisome churn of politics if they want to exercise influence. But statesmanship also means avoiding assimilation into the herd. Balancing these factors is difficult. Almost all political leaders fail.

Even when politicians are on the verge of attaining statesman-like heights, they tend to fall off their pedestal. Napoleon exemplifies this. In 1802, he terminated France’s Revolutionary wars against Europe. He then reformed France’s broken finances, promulgated a new legal code, and reconciled the French state with the Church. Gradually, however, Napoleon lost any sense of restraint. The first sign was the Duc d’Enghien’s kidnapping and judicial murder in 1804. Thereafter followed 12 years of warfare from Lisbon in the West to Moscow in the East. Total casualty estimates range from 3.5 to 7 million. Yes, the Corsican who rose from obscurity was a colossus who bestrode the West. Yet he surely flunked the statesmanship test.

Napoleon’s failure brings us to a neglected facet of statesmanship underscored in Daniel J. Mahoney’s The Statesman as Thinker: Portraits of Greatness, Courage, and Moderation. That quality is moral seriousness. By this, Mahoney means political leaders and thinkers who brought “moral and intellectual virtues” to their reflections about politics which enabled them to see that certain goods are at stake, among which liberty and civilization rank highly.

This is the converse of statesmanship of the type practiced by, say, Otto von Bismarck or Henry Kissinger. Mahoney is not an anti-realist. But he is against the type of realpolitik that reduces ideas to weapons, prudence to cynicism, and life to power. For Mahoney, statesmanship involves the morally-upright pursuit of morally objective ends in a manner cognizant of humanity’s deep imperfections. That is the mirror that he holds up to our times. The reflection which we receive back is a decidedly pedestrian one.

Words like “thought,” “contemplate,” and “understand” feature significantly throughout Mahoney’s book. Those whom he identifies as exemplary statesmen-thinkers—Edmund Burke, Winston Churchill, Alexis de Tocqueville, Abraham Lincoln, Charles de Gaulle, and Vaclav Havel—invested considerable time thinking about how to advance the good in a grey world marked by, at times, outright evil.

All minds are subject to formation. For this reason, Mahoney believes “liberal learning” is indispensable for statesmanship. By that, he doesn’t necessarily mean formal education. Burke, Tocqueville, and de Gaulle were superbly educated men. Churchill, however, struggled at school, Lincoln was largely an autodidact, and Havel’s education was eclectic. Rather, Mahoney’s liberal learning involves acquiring and integrating knowledge derived from fields ranging from philosophy to economics with the lessons imparted by history and experience. Such minds, he believes, are essential if we are to understand the why of the present and the political possibilities this creates for the future.

The right thinking to which Mahoney refers, however, has a deeper purpose. The goal of liberal learning, he believes, is to attain moral clarity about the ends at stake and the means of protecting and promoting them. That last part is especially important. If statesmanship is ultimately an expression of human excellence, it can have no truck with evil, whether as ends or means.

This type of moral insight is critical to understanding how figures like Burke grasped the challenges facing their nations when others didn’t. Burke fully comprehended the late-eighteenth-century British fiscal-military state’s problems like no other because of his learning, especially his appreciation for history and what today is called economics. But Burke also possessed the moral clarity that enabled him to know how to promote reform. That same lucidity allowed him to grasp the stark differences between his reform program and the agenda of the ideologues across the Channel. For a while, Burke was alone in making that distinction—just as Churchill stood alone amidst Tory appeasers and Labour pacifists in the 1930s, and de Gaulle was one of the few Frenchmen who recognized what an armistice with Nazi Germany really meant.

Can anyone seriously claim that such learning plus depth of moral perception characterizes leading Western political leaders today? Seriously—any of them? Consider how German politicians of left and right (Gerhard Schröder and Angela Merkel, for instance) misread and pandered to Russia’s Vladimir Putin for years. Now they find themselves compromised and/or discredited.

Similarly, few American politicians understood that China’s limited opening to economic freedom wasn’t going to make the men in Beijing “just like us.” As recently as mid-2019, presidential-candidate Joe Biden told Americans, “I mean, you know, they’re not bad folks, folks.” Well, “folks,” any state which derives its ultimate legitimacy from an ideology as insidious as Marxism plus 4,000 years of authoritarian rule is not going suddenly to become “just like us” because of doux commerce. A statesman would know that.

Moral clarity about the problem doesn’t always suggest an immediate path forward. I don’t think, for example, that embracing protectionism will fix America’s China dilemma; it might even make matters worse. Mahoney’s point is that moral clarity is intrinsic to understanding the fullness of reality: knowing that, for instance, Hitler would not be placated by handing over the Sudetenland, or that the Jacobin terrorists in Paris were ideologues uninterested in the ways of pre-1789 diplomacy. Such truths may be unpalatable to sentimental humanitarians. But they illuminate reality in ways that realpolitik cannot.

Having attained that deeper conception of reality, the question remains: “what should politicians do?” For it is in the doing that many a potential statesman has come undone. The key here for Mahoney is moderation. This goes beyond rejecting Wilsonian idealism. Nor does Mahoney have in mind pragmatism, let alone some type of middle way.

Mahoney’s conception of moderation is undergirded by attention to prudence as a virtue. And the true virtue of prudence—at least as understood by those in the classical tradition like Thomas Aquinas—doesn’t involve being cunning or worldly-wise.

Prudence is best understood here as “practical wisdom.” That involves reasoning from first principles (do good and avoid evil; treat others as you would wish to be treated, etc.) to particularities; knowing the difference between virtue and vice (e.g., the difference between courage and recklessness); governing your emotions; correctly understanding the conditions in which you must act; comparing the alternatives dispassionately; open-mindedness to new possibilities while paying attention to accumulated knowledge from the past; and a cautiousness that never degenerates into timidity.

Here we see why prudence truly is the master virtue. Though it does not guarantee any outcomes, it enables you to sleep at night knowing that you sought to be as wise as possible. Statesmen, from Mahoney’s standpoint, are those people involved in public life who consistently choose and act prudently. Thus we see Lincoln inching his way towards abolishing slavery, Tocqueville patiently outlining how to prevent liberty from disintegrating into nihilism, and Havel gently persuading his fellow citizens that the choice to live in truth was indispensable for escaping Communism’s lies.

None of this means eschewing risk-taking. Sometimes taking a risk is prudent. When de Gaulle took to the airwaves on June 18, 1940, to explain to a defeated France why it should continue to resist, his was not a reckless choice. Likewise, neither Tocqueville’s 1848 speech to France’s Constituent Assembly denouncing socialism nor his firm opposition to Louis-Napoleon’s authoritarian ambitions were egoistical stunts. These were acts of far-sighted wisdom, subsequently vindicated by events.

The Shadow of Egalitarianism and Technocracy

Taking risks means accepting that your decision may turn out to be wrong. The statesmen studied by Mahoney made mistakes. De Gaulle’s conviction, he observes, that 1960s Eastern European Communist leaders would eventually behave like patriots failed to appreciate the depth of these men’s Bolshevik commitments. Likewise, Churchill erred on several occasions, such as supporting Edward VIII during the Abdication Crisis or remaining prime minister after suffering a stroke.

But as Mahoney notes, “Political greatness is not coextensive with infallibility or perfect judgment.” Even those with the most liberal learning, deepest moral clarity, and refined sense of prudence will blunder. What’s important is that they aren’t afraid to take responsibility and act. Nothing better underscores this point’s ongoing saliency than Western political leaders’ behavior during Covid.

With pitiably few exceptions, most such politicians proved excessively reliant on experts when making their decisions. It’s not that epidemiologists should have been ignored. But experts are people of techne: their job is to make available specialized insight into parts of a problem to those responsible for the political community’s general welfare. But even in a pandemic, it is the political leader’s responsibility to think about many other priorities, needs, and data-points besides epidemiologists’ particular concerns. Techne should serve phronesis—not the other way around. The fact that few Western leaders were prepared to remind us of this truth speaks volumes about the absence of liberal learning, moral seriousness, and prudence among today’s political class.

The problem we face is that such formation, insight, and habits carry little purchase in our age of rampant egalitarianism and technocracy. For liberal learning, moral seriousness and prudence repudiate relativism, sentimentalism, populism, and slavish deference to those whose horizons are largely those of techne. But the leveling associated with egalitarian conceptions of democracy as well as reason’s reduction to the empirical has left experts as the only valid authority. Ergo, the qualities that characterize statesmanship are marginalized, and political leaders are mute in the face of ever-escalating demands to “Follow the science!”—no matter how provisional or subject to verification the science may be.

This isn’t to imply that untrammeled elitism, let alone anti-democratic politics, is the answer. Elites make mistakes all the time and aren’t above prioritizing their sectional interests above the general welfare. They need as much checking as populist demagogues. Nor is there anything about monarchy or aristocracy that guarantees statesman-like behavior. It is merely to suggest that statesmanship will be a rare commodity until free societies shake off their present obsession with equality-as-sameness and their reduction of wisdom to techne. Until that occurs, I fear, ever-escalating mediocrity and ever-diminishing statesmanship will be the norm.

This article, A World Bereft of Statesmanship, was originally published by the American Institute for Economic Research and appears here with permission. Please support their efforts.

Does Sam Bankman-Fried Own Everything Now: Recap Of Last Week's Top Crypto News