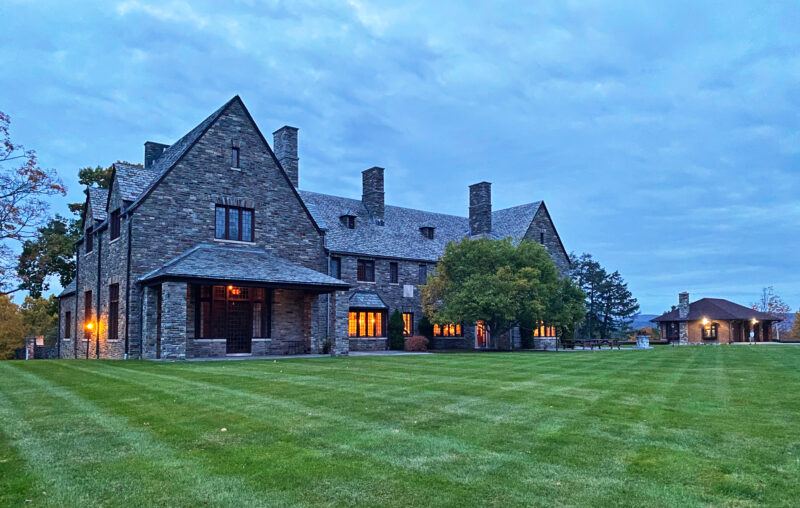 In the last few years, AIER has become a global economic policy powerhouse. Some of the architects of that house have moved on to build other edifices but what they have built here remains imposing. We know that because of who continues to attack us, including the CCP via DoS attacks and the highest levels of the British government via a smear campaign against AIER and the three eminent authors of the Great Barrington Declaration (GBD). Yes, the British government.

Although then a frequent contributor to AIER’s Daily Economy website, I was not an AIER employee nor present, even virtually, when the three authors of the GBD met at AIER’s main campus in Great Barrington in October 2020, so I cannot speak in detail about what transpired. I was, however, floored by the over-the-top reaction from some quarters because all the GBD urged was that policymakers should respond to Covid-19 the same way that they had responded to all previous epidemics, by protecting the most vulnerable as much as possible, not by locking down the healthy, particularly those who had already acquired natural immunities.

The three eminent public health scholars who authored the GBD, however, came under intense personal attack from those committed to continuing to try the already obviously failed policy of “locking down,” i.e., of imposing top-down government economic planning, aka socialism, in the name of public health. Except in a few places like Florida, the lockdowners won by controlling mass media messaging, feckless politicians, and, ultimately, the power of the purse.

Key lockdown proponents, however, knew that their policy position was irrational and hence untenable in the long run. In their eyes, the GBD authors were guilty of a cardinal sin, exposing the fact that the policy response to the pandemic was much more novel than the SARS-CoV-2 virus itself, and hence they had to be punished lest their tried-and-true policy of focused protection gain traction. The punishment came in the form of a smear campaign, a series of ad hominem attacks against the GBD authors, and dismisinfoganda, including denying the existence of herd immunity(!!), that has continued to this day.

To combat overwhelming evidence that lockdowns saved no more lives than the focused-protection policies advocated by the authors of the GBD would have and that the costs of lockdowns were ginormous, orders of magnitude more than focused-protection (AIER recently updated its report on the business, economic, psychological, and social costs of lockdowns here.), pro-lockdowners spun an obviously false conspiracy theory implicating one of the GBD authors in delaying Britain’s fall lockdown.

Phil Magness and I have sensed something terribly amiss in Britain ever since the John Snow Memorandum appeared soon after the GBD began to attract considerable international attention. Little did we know, though, that Dominic Cummings, chief advisor to British PM Boris Johnson, and Dr. Jeremy Farrar, director of the British healthcare research nonprofit foundation the Wellcome Trust and (for now) member of SAGE (Scientific Advisory Group for Emergencies), were so deeply involved in the attacks against AIER and the GBD authors. In his recent book Spike, however, Farrar noted that Cummings “wanted to run an aggressive press campaign against those behind the Great Barrington Declaration and others opposed to blanket Covid-19 restriction.”

Cummings is now on the outs with PM Johnson, but MP Neil O’Brien may take his place in the inner sanctum. O’Brien was one of many Brit policymakers duped by the Cummings campaign, to the point that he helped to found Anti-Virus: The COVID-19 FAQ, a radical pro-lockdown propaganda site that is some combination of daft and inept. It admits, for example, that most PCR tests in Britain were run at 40 or more cycles but “counters” by noting that PCR tests run at or under 27 cycles were fairly accurate when compared to a culture test, i.e., actually growing the “novel” coronavirus in a petri dish after digging around some poor chap’s nose. Fine and dandy but irrelevant to the actual situation! Other logical errors abound to the point that the site has to be seen to be (dis)believed.

While we fervently wish that policymakers would expend their limited time, money, and brainpower trying to help people by means of rational, empirically-based policies instead of attacking public-spirited research institutes and independent scientists with weak accusations, tortured logic, and taxpayer money, the British and Chinese attacks at least make AIER stronger by allowing us to make our case with donors (none of which include Koch-related institutions, some of which, incidentally, supported lockdowns).

This article, AIER Doing It Right, was originally published by the American Institute for Economic Research and appears here with permission. Please support their efforts.