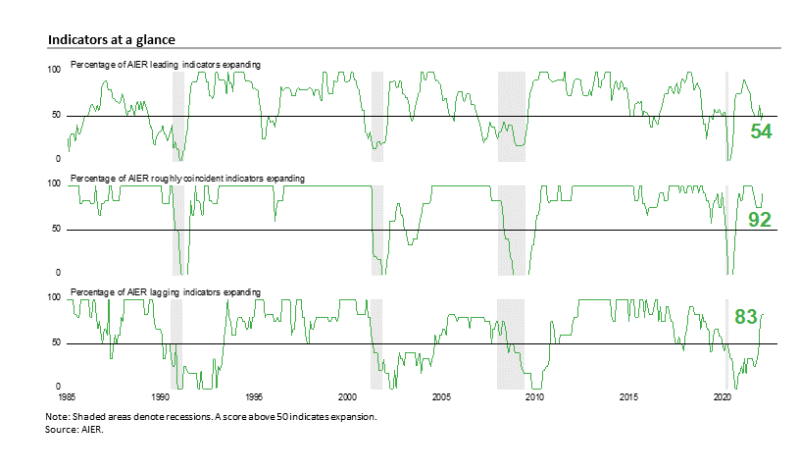 As expected, volatility is creeping into the AIER business cycle indicators. AIER’s Leading Indicators Index partially rebounded in March, posting an 8-point rise following a 17-point drop in February and a 13-point gain in January. The Leading Indicators Index is fluctuating around the neutral 50 threshold, hitting 54 in March after a 46 in February and a 63 in January. The average for the first quarter comes in at 54 versus a neutral 50 average for October through December (see chart).

Among the most significant forces driving the economy and at least partially responsible for the increased volatility include the persistent upward pressure on prices, the tight labor market, and fallout from the Russian invasion of Ukraine. Rapidly rising prices negatively impact consumer attitudes and consumer behavior including consumer spending. Rapid price increases have also provoked a new Fed tightening cycle, raising the risk of a policy mistake. Fallout from the Russian invasion of Ukraine has caused volatility in capital and commodity markets, especially energy markets, contributing to price pressures while also potentially further disrupting global supply chains. Offsetting these is the strong labor market which provides some support for consumer attitudes, incomes, and spending, though it also has the potential to ignite a wage-price spiral.

Increased volatility should be expected to continue in capital and commodity markets, the economy, and economic statistics over coming months. Expect continued volatility for the AIER business cycle indicators as well. Caution is warranted.

The AIER Leading Indicators index rebounded in March, adding 8 points, partially offsetting the 17-point drop in February. The March level of 54 is back above the neutral 50 threshold following a 46 in February. February was the first reading below neutral since August 2020 in the wake of government lockdowns that sent the U.S. economy to the worst recession in history. Along with a 63 reading in January, the average for the first quarter was 54 following three consecutive months at the neutral 50 level for October through December.

Three leading indicators changed signal in March, with two showing improvement and one deteriorating: the average workweek in manufacturing moved from an unfavorable trend to a favorable trend while real retail sales improved from a negative trend to a neutral trend. The total heavy-truck unit sales indicator weakened in March, dropping from a neutral trend to a negative trend. Among the 12 leading indicators, five were in a positive trend in March while four were trending lower and three were trending flat or neutral.

AIER’s Lagging Indicators index was unchanged at 83 in March. January through March was the first three-month run above neutral since the fourth quarter of 2019. No individual indicators changed trend for the month. In total, five indicators were in favorable trends, one indicator had an unfavorable trend, and none had a neutral trend.

Overall, labor shortages, rising costs and shortages of materials, and logistics and transportation bottlenecks are restraining production, and sustaining upward pressure on prices. Upward price pressures have resulted in substantial declines in consumer sentiment and may be impacting consumer behavior including consumer spending decisions. Furthermore, rapidly rising prices have also provoked a new cycle of Fed policy tightening, raising the risk of a policy mistake.

While cresting numbers of new Covid cases in late January and early February had the potential to support businesses’ efforts to improve supply chains and expand production, geopolitical turmoil surrounding the Russian invasion of Ukraine has had a dramatic impact on capital and commodity markets, especially energy markets, adding to upward price pressures and launching a new wave of potential disruptions to supply chains and business activity.

The labor market remains the strongest support for the economy. Continued jobs growth, near record levels of open jobs, and rising wages help consumer attitudes and consumer spending, though they can also encourage a wage – price spiral. On balance, the outlook remains highly uncertain, and caution is warranted.

Despite the strong, broad-based gains over the past year, only about half of the industry groups in the employment report are above their pre-pandemic levels. Transportation and warehousing is the largest gainer, with payrolls more than 10 percent above pre-pandemic levels. That may be a positive sign for some of the logistical problems plaguing U.S. businesses.

The average workweek for all workers fell to 34.6 hours in March while the average workweek for production and nonsupervisory workers fell 0.1 hour to 34.1 hours. Combining payrolls with hourly earnings and hours worked, the index of aggregate weekly payrolls for all workers gained 0.5 percent in March and is up 10.80 percent from a year ago; the index for production and nonsupervisory workers also rose 0.5 percent but is 11.5 percent above the year ago level.

The March jobs report shows total nonfarm and private payrolls posted more strong gains. Both are close to matching pre-pandemic levels as is the civilian labor force. However, with population growth, labor force participation remains significantly below pre-pandemic rates. Getting people into the labor force and employed would likely help ease upward pressure on consumer prices.

Two industry categories have more than 2.0 million openings each: education and health care (2.226 million) and professional and business services (2.088 million). Trade, transportation, and utilities (1.863 million), and Leisure and hospitality (1.705 million) are both above 1 million.

The highest openings rates were in leisure and hospitality (9.9 percent), professional and business services (8.7 percent), education and health care (8.5 percent), transportation, and utilities, trade (6.2 percent), and manufacturing (6.0 percent), and all are all above the pre-lockdown-recession private-sector peak of 5.1 percent. Among the private-sector industry groups, only construction (4.8 percent) is below 5.1 percent.

The number of private-sector quits rose, coming in at 4.106 million, up from 4.032 million in January. Trade, transportation, and utilities led with 1.061 million quits followed by leisure and hospitality with 863,000 quits, and professional and business services with 704,000. The total quits rate rose to 2.9 percent for the month, up from 2.8 percent in the prior month while the private-sector quits rate was unchanged at 3.2 percent.

The quits rates among the private-sector industry groups are still dominated by leisure and hospitality with a rate of 5.6 percent, well ahead of the number two, trade transportation, and utilities, with a 3.7 percent rate, and number three, professional and business services, with a 3.2 percent quits rate. All the major groups within the private sector have a quits rate above the average over 2001 through 2019.

The number of job seekers (unemployed plus those not in the labor force but who want a job) per opening fell to 1.078 in February, a new record low. Prior to the lockdown recession, the low was 1.409 in October 2019.

The job openings data continue to suggest a very tight labor market. The tight labor market is leading to significant turnover among employees and contributing to the headwinds facing businesses as they try to boost production.

The final March results from the University of Michigan Surveys of Consumers show overall consumer sentiment fell again, hitting the lowest level since August 2011. The composite consumer sentiment decreased to 59.4 in March, down from 62.8 in February, a drop of 5.4 percent. The index is now down 41.6 points from the February 2020 peak.

The current-economic-conditions index fell to 67.2 from 68.2 in February. That is a 1-point decrease for the month and leaves the index with a 47.6-point drop since February 2020. The second sub-index — that of consumer expectations, one of the AIER leading indicators — sank 5.1 points for the month, dropping to 54.3. The index is off 37.8 points since February 2020. All three indexes remain below the lows seen in four of the last six recessions.

According to the report, “Consumer Sentiment remained largely unchanged in late March at the same diminished level recorded at mid month. Inflation has been the primary cause of rising pessimism, with an expected year-ahead inflation rate at 5.4%, the highest since November 1981. Inflation was mentioned throughout the survey, whether the questions referred to personal finances, prospects for the economy, or assessments of buying conditions.”

The one-year expectations has spiked above 3.5 percent several times since 2005 only to fall back. The five-year inflation expectations remained unchanged at 3.0 percent in March. That result remains well within the 25-year range of 2.2 percent to 3.5 percent.

The report states, “Confidence that economic policies will resolve the problem is essential. Unfortunately, half of all consumers unfavorably assessed current policies, more than three times the 16% who rated them favorably. Making the situation even more difficult, policy makers need to take account of two unusual sources of economic uncertainty, one rather minor (the new covid variant), and a major source of continued economic disruption (the Russian invasion of Ukraine).”

One positive note in the survey was continued favorable views of the labor market. According to the report, “The sole area of the economy about which consumers were still optimistic was the strong job market. Consumers anticipated in March that during the year ahead it was more likely that the unemployment rate would post further declines than increases (30% versus 24%).”

The Consumer Confidence Index from The Conference Board rose slightly in March and remains at a moderately favorable level overall. The composite index increased 1.5 points or 1.4 percent to 107.2. From a year ago, the index is down 6.7 percent. The small change for the month hides much larger changes in the two major components.

The expectations component sank 4.2 points, taking it to 76.6 while the present-situation component increased 10.0 points to 153.0. The expectations index is at its lowest level since February 2014 and only about 6 points above the 2001 recession lows.

Core retail sales, which exclude motor vehicle dealers and gasoline retailers, fell 0.4 percent for the month, following a 5.2 percent jump in January. The decline leaves that measure with a 15.8 percent gain from a year ago.

Categories were mixed for the month with seven up and six down in February. The gains were led by a 5.3 percent rise in gasoline spending. However, the average price for a gallon of gasoline was $3.68, up 5.0 percent from $3.50 in January.  Food services and drinking sales followed with a 2.5 percent increase while miscellaneous store sales rose 1.9 percent and sporting goods, hobby, and bookstore sales gained 1.7 percent. Nonstore retailers led the decliners, down 3.7 percent, followed by health and personal care store sales, down 1.8 percent, and furniture and home furnishings store sales, off 1.0 percent.

This article, AIER Leading Indicators Index Improves Slightly, Remains Near Neutral, was originally published by the American Institute for Economic Research and appears here with permission. Please support their efforts.