AIER Leading Indicators Index Returns to Neutral in May 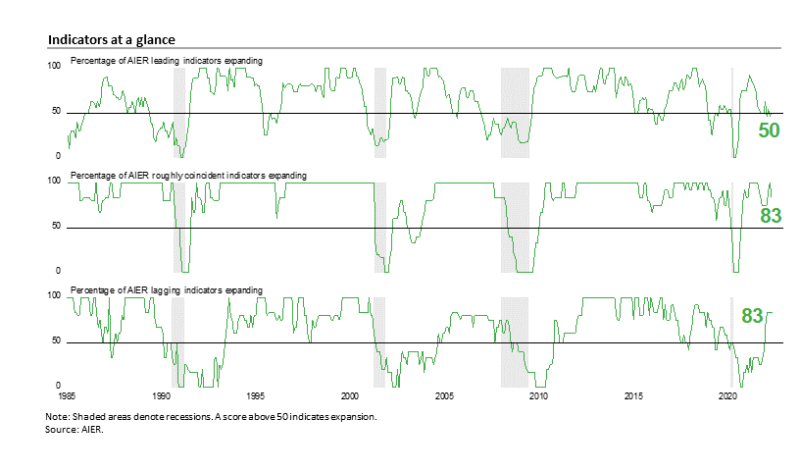 Board trends and risks of persistent upward pressure on prices, labor shortages and turnover, fallout from the Russian invasion of Ukraine, and lockdowns in China in response to outbreaks of COVID-19 remain significant forces impacting the domestic and global economies. Furthermore, a Fed tightening cycle raises the risk of a policy mistake. However, the strong labor market provides support for consumer incomes and spending, though it may also fuel a wage-price spiral.

While broad trends and risks continue, there are some signs of inflection in a few areas. Housing is showing some mixed signs while consumer sentiment has weakened, largely driven by the impact of persistent price increases. In addition, savings rates and spending as a share of income may be sending some early warnings. Caution is warranted.

AIER Leading Indicators Index Falls Back in May

The Roughly Coincident Indicators index fell back in May, dropping to a reading of 83 following two consecutive gains that put the index at a perfect 100 in April. One indicator weakened in May. The real manufacturing and trade sales indicator fell from a positive trend to a neutral trend. Overall, all five indicators – nonfarm payrolls, employment-to-population ratio, industrial production, real personal income excluding transfers, and The Conference Board Consumer Confidence in the Present Situation – were trending higher in May while the real manufacturing and trade sales indicator was in a flat or neutral trend.

Lingering materials shortages, labor shortages and turnover, and logistical problems continue to slow the recovery in production across the economy and are sustaining upward pressure on prices. Upward price pressures have resulted in a new cycle of Fed policy tightening, raising the risk of a policy mistake. Furthermore, the Russian invasion of Ukraine and recent lockdowns in China in response to a recent wave of COVID-19 have launched a new wave of potential disruptions to global supply chains.

The outlook is for continued economic growth, but risks remain elevated. Consumer spending has been a solid source of growth but there may be some signs that the rate of growth in consumer spending may be unsustainable. Housing is also showing some signs of fatigue as record home prices and surging mortgage rates temper demand.

Additionally, 2022 is a Congressional election year. Intensely bitter partisanship and a deeply divided populace could lead to turmoil as confidence in election results come under attack. Contested results around the country could lead to additional economic disruptions and government paralysis, again testing the durability of democracy. Caution is warranted.

Furthermore, these data are not adjusted for price changes. In real terms, total retail sales were up 0.6 percent (adjusted using the CPI) following a 0.2 percent increase in March and are also now showing stronger upward trends.

Core retail sales, which exclude motor vehicle dealers and gasoline retailers, rose 1.0 percent for the month, following a 1.2 percent gain in March. The gains leave that measure with an 8.2 percent gain from a year ago. After adjusting for price changes, real core retail sales rose 0.5 percent in April, the fourth monthly gain in a row, and are up 2.0 percent from a year ago.

Gasoline spending led the decliners, down 2.7 percent for the month. However, the average price for a gallon of gasoline was $4.37, down 0.7 percent from $4.40 in March, suggesting price changes accounted for some of the move. Sporting goods, hobby, musical instrument, and bookstores sales were off 0.5 percent, and food and beverage store sales were down 0.2 percent.

Overall, retail sales rose for the month and revised data show a stronger trend in recent months. However, rising prices are still providing some boost to the numbers. Furthermore, persistent elevated rates of price increases are starting to have a negative effect on consumer attitudes.

The final May results from the University of Michigan Surveys of Consumers show overall consumer sentiment continued to fall in the latter part of May. The composite consumer sentiment decreased to 58.4 in May, down from 59.1 in mid-May and 65.2 in April. The final May result is a drop of 6.8 points or 10.4 percent. The index is now down 42.6 points from the February 2020 result and at the lowest level since August 2011.

Both component indexes posted declines. The current-economic-conditions index fell to 63.3 from 69.4 in April. That is a 6.1-point or 10.0 percent decrease for the month and leaves the index with a 51.5-point drop since February 2020 and puts the index at its lowest level since March 2009.

The second sub-index — that of consumer expectations, one of the AIER leading indicators — lost 7.3 points or 11.7 percent for the month, dropping to 55.2. The index is off 36.9 points since February 2020 and is at the second-lowest level since November 2011.

All three indexes are near or below the lows seen in four of the last six recessions.

According to the report, “This recent drop was largely driven by continued negative views on current buying conditions for houses and durables, as well as consumers’ future outlook for the economy, primarily due to concerns over inflation.” However, the report adds, “At the same time, consumers expressed less pessimism over future prospects for their personal finances than over future business conditions. Less than one quarter of consumers expected to be worse off financially a year from now.” Furthermore, the report states, “Looking into the long term, a majority of consumers expected their financial situation to improve over the next five years; this share is essentially unchanged during 2022. The report’s take-away, “A stable outlook for personal finances may currently support consumer spending. Still, persistently negative views of the economy may come to dominate personal factors in influencing consumer behavior in the future.”

Strong Retail Spending May Not Be Sustainable

At the same time, the personal savings rate has fallen sharply, coming in at 4.4 percent of disposable income in April, well below the five-year average rate of 7.4 percent through December. That is the lowest rate since a 3.8 percent rate in August 2008, in the middle of the severe 2008 – 2009 recession.

Sales of new single-family homes plunged in April, declining 16.6 percent to 591,000 at a seasonally-adjusted annual rate from a 709,000 pace in March and just slightly ahead of the 582,000 pace at the bottom of the lockdown recession. The April drop follows a 10.5 percent decline in March, a 4.7 percent fall in February, and a 1.0 percent drop in January. The four-month run of decreases leaves sales down 26.9 percent from the year-ago level (see first chart). Meanwhile, 30-year fixed rate mortgages were 5.3 percent in late May, up sharply from a low of 2.65 percent in January 2021.

The total inventory of new single-family homes for sale jumped 8.3 percent to 444,000 in April, putting the months’ supply (inventory times 12 divided by the annual selling rate) at 9.0, up 30.4 percent from April and 91.5 percent above the year-ago level. The months’ supply is at a very high level by historical comparison and is approaching peaks associated with prior recessions. The plunge in sales, high months’ supply, and surge in mortgage rates should weigh on median home prices in coming months and quarters. However, the median time on the market for a new home remained very low in April, coming in at 2.8 months versus 3.9 in March.

The selling rate of existing homes decreased 2.4 percent in April, to a 5.61 million seasonally adjusted annual rate. The selling rate is down 5.9 percent from a year ago.

The selling rate in the market for existing single-family homes, which account for about 89 percent of total existing-home sales, fell 2.5 percent in April, coming in at a 4.99 million seasonally adjusted annual rate, the first month below 5 million since June 2020. From a year ago, the selling rate is down 4.8 percent.

Total inventory of existing homes for sale rose in April, increasing by 10.8 percent to 1.03 million (the first result above one million since November) leaving the months’ supply (inventory times 12 divided by the annual selling rate) up 0.3 month at 2.2, the highest since October, but still extremely low by historical comparison.

Housing is likely to be volatile over the coming months as fundamentals adjust to changing market conditions. Increased opportunities for employees to work remotely are likely to impact demand while supply chain issues and labor difficulties impact supply. Furthermore, record-high prices and the recent surge in mortgage rates will likely push some buyers out of the market.

This article, AIER Leading Indicators Index Returns to Neutral in May, was originally published by the American Institute for Economic Research and appears here with permission. Please support their efforts.