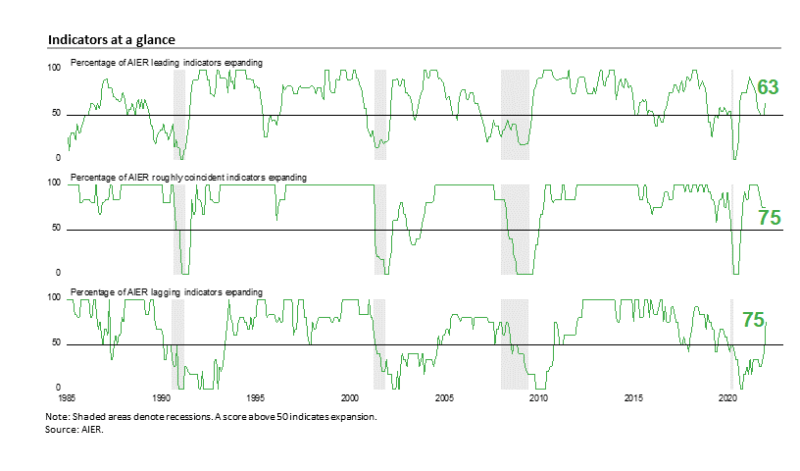 AIER’s Leading Indicators Index posted a solid gain in January, rising to 63 following three consecutive months at the neutral 50 mark. The gain was the largest one-month increase since September 2020, leaving the index at its highest level since July 2021. The Roughly Coincident Indicators Index was unchanged again in January, holding at 75 for a third consecutive month, while the Lagging Indicators Index posted a 33-point gain, the largest since November 2010, and is at its highest level since February 2019 (see chart). January was the first month since December 2019 that all three AIER business cycle indicators were above the neutral 50 threshold.

The positive result for the AIER Leading Indicators Index suggests continued economic expansion with the potential for a broadening of growth in the economy. However, risks remain elevated as upward price pressures continue due to ongoing production bottlenecks, labor and materials shortages, and logistical problems. In addition, Fed policymakers are likely to embark on a tightening cycle beginning in March, raising the risk of a policy mistake. Furthermore, 2022 is a Congressional election year and may lead to unexpected events given the intensely bitter partisan atmosphere and a deeply divided populace.

The AIER Leading Indicators index posted its largest monthly gain since September 2020, rising 13 points in January to 63. The January result is the highest level since July 2021 and follows three consecutive months at the neutral 50 level.

Four leading indicators changed signal in January: the real retail sales indicator weakened from a neutral trend to a negative trend but was more than offset by improvements in the treasury yield spread indicator (neutral to positive), the housing permits indicator (negative to positive), and the heavy truck unit sales indicator (negative to neutral). In total among the 12 leading indicators, seven were in a positive trend in January while four were trending lower and one was trending flat or neutral. Initial claims for unemployment benefits, manufacturing and trade sales to inventory ratio, real new orders for core capital goods, real stock prices, and debit balances in margin accounts were the five indicators maintaining favorable trends while the average workweek in manufacturing, the University of Michigan Index of Consumer Expectations, and real new orders for consumer goods indicators all remained in unfavorable trends.

AIER’s Lagging Indicators index increased to 75 in January, up from 42 in December, 33 in November, and 25 in October. January was the first month above neutral since December 2019, ending a run of 24 consecutive months at or below neutral. Three lagging indicators showed improvement in January, with commercial and industrial loans outstanding and real manufacturing and trade inventories improving to a positive trend while the composite short-term interest rates indicator improved from an unfavorable trend to a neutral trend. Overall, four indicators were in favorable trends, one indicator had an unfavorable trend, and one had a neutral trend.

Overall, ongoing disruptions to labor supply and production, rising costs and shortages of materials, and logistics and transportation bottlenecks continue to exert upward pressure on prices. Furthermore, continued waves of new Covid cases likely exacerbated these problems in late December and January. Businesses remain focused on improving supply chains and expanding production and are likely to make progress once the wave of new Covid cases crests.

Some recent data reports suggest there may be some progress being made already on the production side while somewhat slower consumer spending could help bring supply and demand back to balance more quickly and help reduce price pressures. The weaker trend for real retail sales (AIER Leading Indicator), positive trend for industrial production (AIER Roughly Coincident Indicator), neutral trend for real manufacturing and trade sales (AIER Roughly Coincident Indicator), and positive trend for real manufacturing and trade inventories (AIER Lagging Indicator) provide some basis for optimism. Even with some easing, a shortage of labor may persist for some time.

Business fixed investment increased at a 2.0 percent annualized rate in the fourth quarter of 2021, contributing 0.28 percentage points to final growth. That gain was led by a 10.6 percent jump in intellectual-property investment (adding 0.53 points to growth) and a 0.8 percent gain in spending on equipment (adding 0.05 percentage points). Those gains were partially offset by a decline in spending on business structures where spending fell at an 11.4 percent rate, the third decline in a row, and subtracting 0.30 percentage points from final growth.

Businesses added to inventory at a $173.5 billion annual rate (in real terms) in the fourth quarter versus liquidation at a $66.8 billion rate in the fourth quarter, adding a whopping 4.9 percentage points to fourth-quarter growth. The inventory accumulation helped boost the real nonfarm inventory to real final sales of goods and structures ratio to 3.87 from 3.80 in the third quarter and 3.75 in the second quarter.  This is still below the 4.3 average for the 10 years through 2019.

Exports rose at a 24.5 percent pace while imports rose at a 17.7 percent rate. Since imports count as a negative in the calculation of gross domestic product, a gain in imports is a negative for GDP growth, subtracting 2.43 percentage points. The rise in exports added 2.43 percentage points. Net trade, as used in the calculation of gross domestic product, had a negligible impact on overall growth.

Government spending fell at a 2.9 percent annualized rate in the fourth quarter compared to a 0.9 percent pace of growth in the third quarter, subtracting 0.51 percentage points from growth.

Retail sales and food-services spending sank 1.9 percent in December following a 0.2 percent gain in November and a strong 1.8 percent jump in October. Despite the December drop, total retail sales are still up 16.9 percent from a year ago and remain about 8 percent above the pre-pandemic trend.

Core retail sales, which exclude motor vehicle dealers and gasoline retailers, dropped 2.5 percent for the month, following a 0.1 percent fall in November but a 1.6 percent increase in October, leaving that measure with a 16.5 percent gain from a year ago. Core retail sales are 6.5 percent above the pre-pandemic trend. Slower sales may help the demand/supply imbalance that has been putting upward pressure on prices.

With retail sales continuing to run above the recent eight-year trend, measured as a share of disposable income excluding transfers, retail sales are also well above the pre-pandemic range of 3.8 percent to 4.1 percent and even above the 4.2 percent to 4.4 percent range that persisted for much of the 1992 though 2007 period. There is a reasonable expectation that retail sales as a share of income is unlikely to go significantly higher and may even decline to the more recent pre-pandemic share. If so, retail sales should slow noticeably and may help ease some of the post-pandemic demand-supply imbalance.

Among the categories, most were down in December. Just three categories posted gains while 10 showed declines. The gains were led by a 1.8 percent increase for miscellaneous retailers, followed by building material and garden equipment and supplies dealers with a 0.9 percent gain, and health and personal care stores with a 0.5 percent rise.

Multifamily permits had two regions with gains in December. The Northeast surged 172.8 percent to 221,000 and the Midwest jumped 39.7 percent to 109,000. On the downside, the South fell 3.9 percent to 249,000 and the West dropped 14.0 percent to 166,000. The surge in the Northeast was largely driven by a jump in permits in the Philadelphia area as tax law changes were enacted affecting real estate permits issued after December 31, 2021.

Lumber prices are once again soaring, coming in around $1,279 per 1,000 board feet in mid-January. The increase in lumber costs will pressure profits at builders and may lead to more price increases for new homes. Furthermore, mortgage rates have jumped recently, with the rate on a 30-year fixed rate mortgage hitting 3.45 percent in mid-January. Higher home prices and higher mortgage rates are likely to slow future housing activity.

Meanwhile, the National Association of Home Builders’ Housing Market Index, a measure of homebuilder sentiment, fell back slightly in January, coming in at 83 from 84 in December, but remains at a generally favorable level. Overall sentiment remains relatively high, but inflation and supply chain disruptions continue to be significant problems. It should be noted, the survey was taken in early January before the recent jump in mortgage rates. The impact of higher rates, if they are sustained, are likely to be more fully reflected in the February Housing Market Index.

Sales of new single-family homes posted a gain in December, jumping 11.9 percent to 811,000 at a seasonally-adjusted annual rate from a 725,000 pace in November. Despite the gain, sales are down 14.0 percent from the year-ago level. New home sales surged in the second half of 2020 but then slowed sharply in the first three quarters of 2021, hitting a low of 649,000 in October. Since October, sales have increased for two consecutive months.

Despite the jump in sales, the total inventory of new single-family homes for sale rose 1.5 percent to 403,000 in December, putting the months’ supply (inventory times 12 divided by the annual selling rate) at 6.0, down 9.1 percent from November but 57.9 percent above the year-ago level. The months’ supply is at a relatively high level by historical comparison and is substantially higher than the months’ supply of existing single-family homes for sale. The relatively high months’ supply may be one reason for the plunge in median home price. The median time on the market for a new home remained very low in December, coming in at 2.8 months versus 2.9 in November.

Sales of existing homes decreased 6.0 percent in December, to a 6.10 million seasonally adjusted annual rate. Sales are down 8.3 percent from a year ago.

Sales in the market for existing single-family homes, which account for about 89 percent of total existing-home sales, dropped 5.9 percent in December, coming in at a 5.44 million seasonally adjusted annual rate. From a year ago, sales are down 8.1 percent.

Total inventory of existing homes for sale fell in December, declining 17.1 percent to 920,000, leaving the months’ supply (inventory times 12 divided by the annual selling rate) down 0.3 months at 1.8.