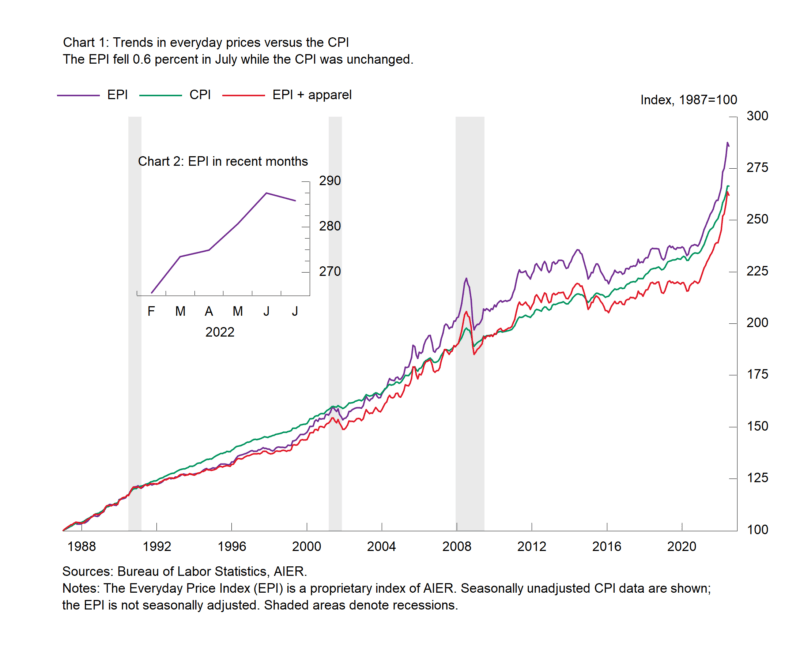 AIER’s Everyday Price sank 0.6 percent in July after a 2.4 percent jump in June. The July EPI broke a string of 19 consecutive increases dating back to December 2020. From a year ago, the Everyday Price Index is up 13.0 percent, less than the 14.6 percent 12-month gain through June.

Motor fuel prices, which are often a significant driver of the monthly changes in the Everyday Price index because of the large weighting in the index and the volatility of the underlying commodity, led the decliners with a 7.6 percent price drop for the month (on a not-seasonally adjusted basis). Six other components showed price declines in July, including a 1.0 percent drop in recreational reading materials, a 0.9 percent decline in internet services, and a 0.6 percent fall in cable and satellite services. A total of seven categories showed declines in July, the highest number since March.

Price increases were led by admissions for events (up 2.1 percent). The two largest positive contributors in July were food at home (up 1.4 percent and contributing 35 basis points) and food away from home (up 0.7 percent for the month and adding 11 basis points). A total of 15 categories had price increases, also the lowest number since March.

The Consumer Price Index, which includes everyday purchases as well as infrequently purchased, big-ticket items and contractually fixed items, was unchanged on a not-seasonally-adjusted basis in July. Energy posted a 4.5 percent drop on a not-seasonally-adjusted basis while food had a 1.1 percent increase. Over the past year, the Consumer Price Index is up 8.5 percent, down from 9.1 percent for the 12-month period through June.

After seasonal adjustment, the CPI was unchanged in July while the core increased 0.3 percent for the month. Within the core, core goods prices were up 0.2 percent in July and 7.0 percent from a year ago. Significant increases for the month were seen in new vehicles (0.6 percent) and household furnishings (0.6 percent), while used cars and trucks posted a 0.4 percent drop.

Price pressures for many goods and services in the economy remain elevated due to shortages of supplies and materials, logistical and supply chain issues, and labor shortages and turnover. However, there are some early signs that some of the pressures may be easing.

Still, sustained elevated price increases are likely distorting economic activity by influencing consumer and business decisions. Furthermore, price pressures have resulted in an intensifying Fed tightening cycle, raising the risk of a policy mistake. The fallout surrounding the Russian invasion of Ukraine continues to disrupt global supply chains. All of these are sustaining a high level of uncertainty for the economic outlook. Caution is warranted.

This article, AIER’s Everyday Price Index Falls 0.6 Percent in July, was originally published by the American Institute for Economic Research and appears here with permission. Please support their efforts.