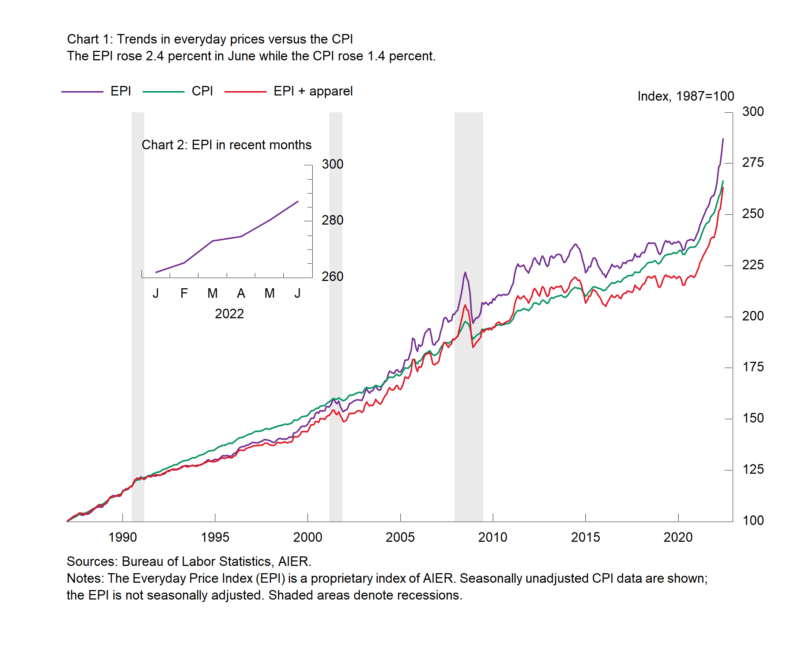 AIER’s Everyday Price surged 2.4 percent in June after a 2.1 percent jump in May. Over the first six months of 2022, the EPI is up at an annualized rate of 22.6 percent. From a year ago, the Everyday Price Index is up 14.6 percent, the second consecutive record high dating back to 1987.

Price increases continue to be generally broad-based with 18 components showing gains versus five showing declines, and one unchanged in June. Motor fuel prices, which are often a significant driver of the monthly changes in the Everyday Price index because of the large weighting in the index and the volatility of the underlying commodity, led the gainers with a 9.8 percent price rise for the month (on a not-seasonally adjusted basis), contributing 135 basis points to the monthly increase.

Household fuels and utilities was the second-largest contributor in June, adding 53 basis points, followed by a 25-basis-point contribution from food at home, and a 14-basis-point contribution from food away from home (restaurants). The remaining contributions were three basis points or less. However, significant price increases were seen in recreational reading material (3.1 percent), admissions (1.7 percent), housekeeping supplies (1.2 percent), nonprescription drugs (1.2 percent), and pets and pet products (1.0 percent).

Apparel prices fell 0.3 percent on a not-seasonally-adjusted basis in June. Apparel prices tend to be volatile on a month-to-month basis. From a year ago, apparel prices are up 5.2 percent.

The Consumer Price Index, which includes everyday purchases as well as infrequently purchased, big-ticket items and contractually fixed items, rose 1.4 percent on a not-seasonally-adjusted basis in June. Energy accounted for nearly half of the increase in June. Over the past year, the Consumer Price Index is up 9.1 percent, the fastest pace since November 1981.

The Consumer Price Index excluding food and energy rose 0.7 percent for the month (not seasonally adjusted) while the 12-month change came in at 5.9 percent, the third deceleration in a row since hitting 6.5 percent in March. The 12-month change in the core CPI was just 1.3 percent in February 2021 and 2.3 percent in January 2020, before the pandemic.

Price pressures for many goods and services in the economy remain elevated due to shortages of supplies and materials, logistical and supply chain issues, and labor shortages and turnover. Sustained elevated price increases are likely distorting economic activity by influencing consumer and business decisions. Furthermore, price pressures have resulted in an intensifying Fed tightening cycle, raising the risk of a policy mistake. In addition, the fallout surrounding the Russian invasion of Ukraine is disrupting global supply chains. All of these are sustaining a high level of uncertainty for the economic outlook. Caution is warranted.

This article, AIER’s Everyday Price Index Rises 2.4 Percent in June, was originally published by the American Institute for Economic Research and appears here with permission. Please support their efforts.