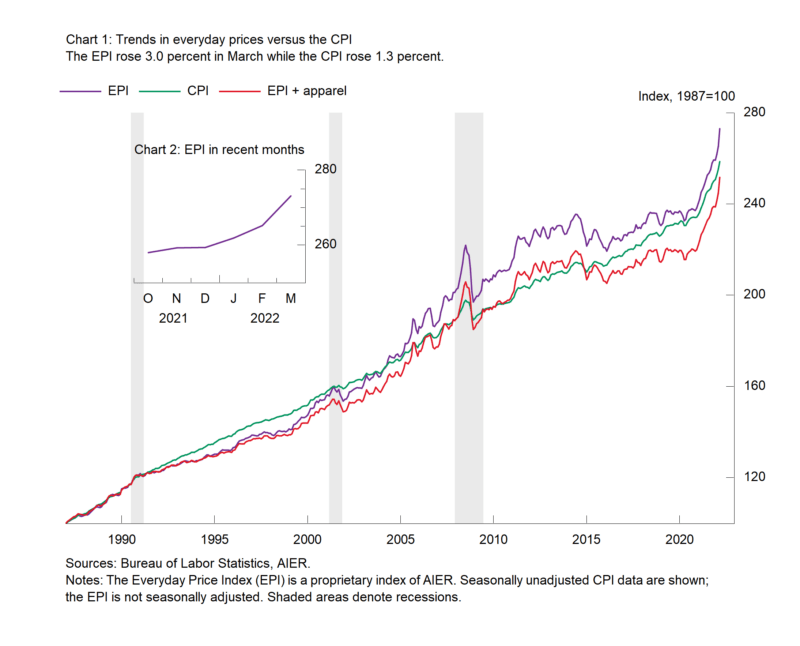 Price increases continue to be generally broad-based though somewhat less so than last month with 15 components showing gains, eight showing declines, and two unchanged in March versus 21 of the 24 components making a positive contribution in February. Motor fuel prices, which are often a significant driver of the monthly changes in the Everyday Price index because of the large weighting in the index and the volatility of the underlying commodity, rose 19.8 percent for the month (on a not-seasonally adjusted basis) and are up 48.2 percent from a year ago. That gain contributed 2.3 percentage points of the 3.0 percent increase for the month. Food at home was the second largest contributor in March, adding 37 basis points followed by a 22-basis-point contribution from household fuels and utilities. The remaining contributions were 4 basis points or less. Nearly every component has a 12-month gain with 19 showing a 12-month gain above two percent and 10 showing gains above five percent.

The Everyday Price Index including apparel, a broader measure that includes clothing and shoes, rose 2.8 percent in March after gaining 1.4 percent in February and 1.1 percent in January. Those results produce an annualized rate of 23.4 percent while over the past year, the Everyday Price Index including apparel is up 11.1 percent, the fastest pace on record. Apparel prices rose 0.8 percent on a not-seasonally-adjusted basis in March. Apparel prices tend to be volatile on a month-to-month basis. From a year ago, apparel prices are up 6.8 percent.

The Consumer Price Index, which includes everyday purchases as well as infrequently purchased, big-ticket items and contractually fixed items, rose 1.3 percent on a not-seasonally-adjusted basis in March. Over the past year, the Consumer Price Index is up 8.5 percent, the fastest pace since December 1981 but less than the 11.4 percent rise in the EPI.

After seasonal adjustment, the CPI rose 1.2 percent in March while the core increased 0.3 percent for the month, the slowest gain since September. Within the core, core goods prices were down 0.4 percent in March though they are still up 11.7 percent from a year ago.

Price pressures for many goods and services in the economy remain elevated due to shortages of supplies and materials, logistical and supply chain issues, and labor problems. Ongoing waves of new COVID-19 cases, geopolitical and global economic turmoil surrounding the Russian invasion of Ukraine, and the start of a new Fed tightening cycle are sustaining a high level of uncertainty for the economic outlook. Caution is warranted.

This article, AIER’s Everyday Price Index Surges 3.0 Percent in March, was originally published by the American Institute for Economic Research and appears here with permission. Please support their efforts.