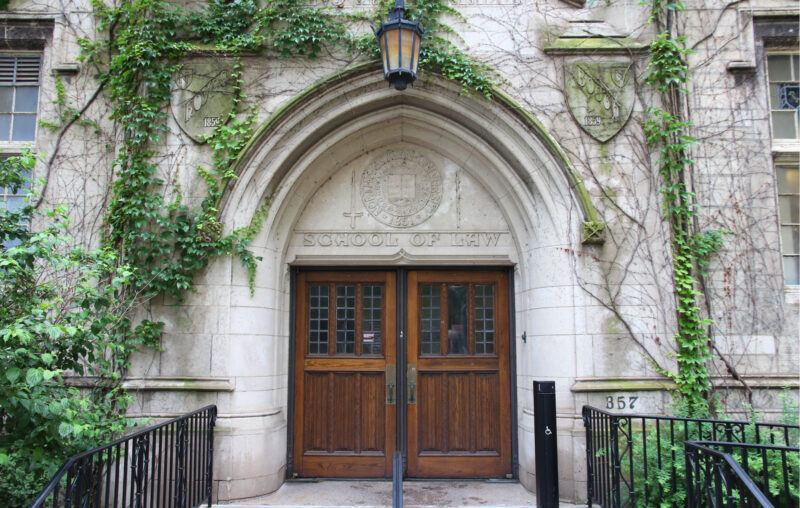 Law school in The United States used to be merely a needless barrier to entry into the market for legal services, helping to keep down competition. Starting back in the 1920s, the American Bar Association started flexing its muscles to prevail upon states to forbid anyone from taking the bar exam who hadn’t graduated from an ABA-accredited law school. The ABA insisted that law school take three years. Prior to that time, many lawyers attended shorter law school programs or learned what they needed to know on the job without going to law school at all.

The simple fact of the matter is that there is no piece of knowledge or skill that can only be learned sitting in a law school classroom. The mandatory three years of that is entirely unnecessary. (I have been making that argument for a long time; see, e.g., this 1997 article in Regulation magazine.)

Then, starting in the 1970s, the academic left began infiltrating law schools with courses and programs intended to turn out “progressive” radicals, as Professor Charles Rounds explained in a 2010 article for the James G. Martin Center, “Bad Sociology, Not Law.”

Of late, matters have taken still another terrible turn. The problem is that “woke” law students are beginning to rule the roost with their demands for ideological purity. And even though they’re merely students, they tend to get their way because the higher ups don’t want to confront them.

Professor Jason Kilborn has been on the faculty of UIC’s law school since 2010, teaching civil procedure and other courses. On an exam he gave in late 2020, he set up a factual situation where a business manager had treated a black woman employee badly. In the question, Kiborn had him calling her “n_____” and “b____.” Soon after the exam, one of the students who had taken it complained to the Black Law Student Association at the school that the question had been so distressing that it interfered with her ability to concentrate on the exam. The BLSA then demanded that the administration terminate the professor (who has tenure) because of his supposed insensitivity.

The law school’s administration ought to have replied that Kilborn had done nothing wrong. Future lawyers, no matter their race, need to be able to deal with unpleasant circumstances such as abusive managers. There is no reason why professors should have to word exam questions so delicately that no student could possibly claim to be hurt or offended.

But that’s not how the school reacted, of course. It suspended Kilborn and insisted that he undergo “training” so that he would never again act in an insensitive manner.

At that point, the Foundation for Individual Rights in Education (FIRE) entered the picture. FIRE sent a letter to the dean, stating that Kilborn’s actions were protected under the school’s commitment to academic freedom and the Constitution. With the assistance of a local attorney recommended by FIRE, Professor Kilborn then worked out a compromise with the school under which it would monitor his classes, but he wouldn’t have to submit to a reeducation camp.

But then the school blew up that deal by insisting on the “training” after all. That was the final straw; Kilborn has filed suit over the violation of his rights. UIC will now face a high price for its inability to say “No” to the unreasonable demands of a small group of student zealots.

Commenting on the UIC case here, columnist George Will pointedly asks, “Could those who concocted this sentence ever recognize their kinship with the moral purifiers of Cambodia’s Khmer Rouge? Or of Mao’s Cultural Revolution? Or of the Stalinist interrogator Gletkin in Koestler’s 1940 novel Darkness at Noon? If so, would UIC’s unconscious emulators be discomfited by the resemblance? Unlikely.”

Law reviews and law journals are often discussed as if they were authoritative expressions of legal knowledge, akin to the Journal of the American Medical Association. The truth, however, is that law reviews and journals are run by students. Second and third-year law students select and edit the articles, which are mostly submitted by professors or occasionally attorneys and judges. The students wrote short notes and edited the submitted articles to make certain that the citations were correct. In the past, it emphatically was not their role to decide whether the substance of the articles met with their approval.

That has begun to change, however. The same zealotry that causes students to complain about professors whose questions make them unhappy is now asserting itself in law journals. A case in point is the way the student editors at Emory Law Journal reacted to an article submitted by Professor Larry Alexander for an issue honoring Professor Michael Perry. Alexander graduated from Yale Law School in 1968 and has been on the faculty of the University of San Diego Law School since 1975. He has written a dozen books and a great many law review articles. He knows legal scholarship.

In his article, Alexander argued against the idea that “institutional racism” is a problem. That displeased the students editing the issue and they demanded that he revise the article extensively, in a way that took out the core of his case, informing him that his writing was “hurtful and unnecessarily divisive.” Alexander declined to water down his article to suit the sensibilities of the students and withdrew it. Two other professors then withdrew their submissions in protest against the journal’s breach of scholarly standards and etiquette.

Commenting on this kerfuffle in an essay on Minding the Campus, attorney Louis Bonham wrote, “Thus, what was supposed to be an honor to Professor Perry and a contribution to constitutional law scholarship has now degenerated into an episode of cancel culture writ large, and a huge black eye for the ELJ, Emory University School of Law, and, quite possibly, the careers of the students involved.”

When Supreme Court Justice Stephen Breyer announced his resignation in January, President Biden promptly stated that he would nominate a black woman to succeed him. Quite a few Americans found it unseemly that the president would categorically rule out everyone who didn’t have those characteristics, among them Ilya Shapiro. Shapiro, long a legal scholar with the Cato Institute, had recently been appointed to a faculty position at Georgetown. He tweeted that Biden’s decision meant that the position would not go to the best-qualified individual, but instead someone of lesser qualifications.

Students demanded that Shapiro be fired. They did not, of course, deign to offer any arguments as to why Shapiro was wrong. That isn’t the style of “woke” students. If something upsets them, they immediately demand punishment for the person responsible.

How did the law school’s administration react? Do you need to ask?

Dean William Treanor declared that Shapiro’s tweet was appalling and hurtful. He said he would suspend Shapiro and launch an “investigation” into him. Meeting with the aggrieved students, he promised to “listen” to them, and that he would “do better.”

Seeing a chance to leverage their complaints against Shapiro, students then called for the defunding of Georgetown’s Center for the Constitution (where Shapiro would be teaching) on the grounds that it promotes an Originalist approach to the Constitution, which bothers them.

FIRE issued a statement on this brazen attack on academic freedom: “Dean William Treanor has made the wrong decision in authorizing this witch hunt, and every day that it continues is an affront to free speech and fairness at Georgetown.”

And in this op-ed, American Enterprise Institute fellow Max Eden points out the dean’s amazing hypocrisy in taking no action against Professor Carol Fair, whose tweets during the confirmation hearings on Brett Kavanaugh approved of violence against his supporters. Eden nails the truth when he writes, “Treanor is the very model of the modern university administrator: Fearful of all, respected by none….Georgetown’s infantilized law students no doubt sense that his weakness can be further exploited by whatever further pretext they prefer to manufacture.”

As if the problem of ideological radicalism wasn’t bad enough in law schools, the American Bar Association (ABA) has adopted an accreditation proposal that would make things worse. The ABA is the sole organization recognized by the federal government as an accreditor of law schools and it wants to use that power to compel law schools to include “training” for students covering bias, racism and cross-cultural competency.

Thus, we see how the legal profession in this country is actively promoting leftist ideology. This new requirement will further inflame radical law students and eventually undermine the neutrality of the judiciary.

This article, American Law Schools: Becoming More and More Dysfunctional, was originally published by the American Institute for Economic Research and appears here with permission. Please support their efforts.