Are Covid Fatalities Comparable with the 1918 Spanish Flu? 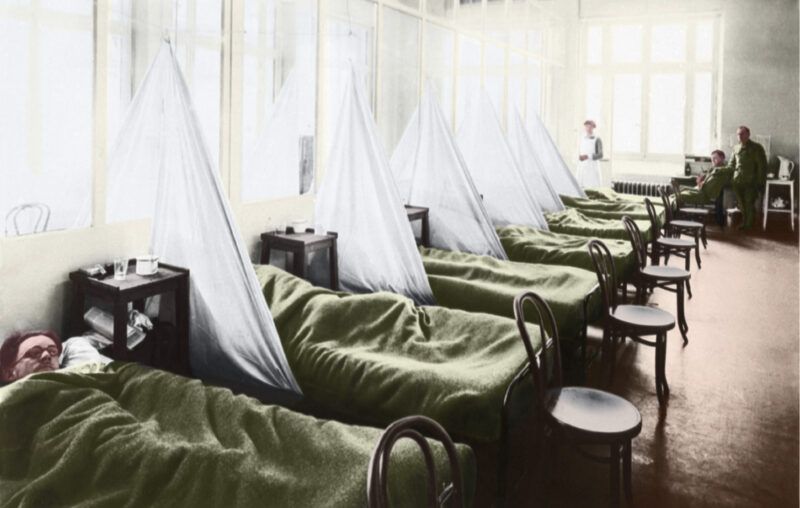 On April 23, 2021 The New York Times published an article titled “How Covid Upended a Century of Patterns in U.S. Deaths.” The article lays out some data regarding the unprecedented uptick in the US death rate that occured in 2020.

As shown in the graph provided by the New York Times, US death rates have been steadily declining over the past century, likely due to advances in technology and living standards. Last year certainly signaled a noticeable break from this trend with a sizable increase in deaths, but not nearly the same as the 1918 Flu which is a universal benchmark for a killer influenza virus.

This graph provided by the New York Times indicates the spike in excess deaths in 2020, which is the number of deaths that have occured exceeding the predictions of standard death trends. This is of course all important information. Last year was certainly a horrific year with the outbreak of Covid-19, the lockdowns, and all the chaos that followed. It was a year of death and despair which should not be taken lightly.

It is common to invoke comparisons with the 1918 Flu Pandemic, as that was an extremely devastating virus that rocked the world. The article makes multiple references to the 1918 pandemic but there are a couple that raise interesting questions for further investigation. The first point is as follows,

“Combined with deaths in the first few months of this year, Covid-19 has now claimed more than half a million lives in the United States. The total number of Covid-19 deaths so far is on track to surpass the toll of the 1918 pandemic, which killed an estimated 675,000 nationwide.”

Comparing the death counts between the 1918 Flu and Covid-19 without adjusting for population growth is extremely misleading. In 1918 the population of the United States was roughly 103 million, while near the end of 2020 it stood at roughly 330 million. According to CDC statistics compiled by a study in JAMA Covid-19 killed 345,000 people in 2020 and now stands at around half a million as stated by the New York Times. Adjusted for the population growth of over 200 million people and holding the death rates constant, the 1918 Flu would have killed over 2 million people if it occured today, which is more than four times greater than Covid-19.

Furthermore, the two diseases are vastly different in terms of who is vulnerable. Covid-19’s severe outcomes almost exclusively affect the elderly and the immunocompromised, particularly those over the age of 65, which is also approaching the life expectancy of a human. Furthermore 94 percent of Covid deaths occurred with preexisting conditions. It poses virtually no risk to children, minimal risk to young adults, and only seems to kill more than 1 percent of victims with those over the age of 65.

On the other hand the Spanish Flu was devastating to virtually all age groups and did not discriminate between the healthy and the unwell. The CDC writes the following about the 1918 Flu:

“Mortality was high in people younger than 5 years old, 20-40 years old, and 65 years and older. The high mortality in healthy people, including those in the 20-40 year age group, was a unique feature of this pandemic.”

It is clear that the comparison is flawed between the 1918 Flu and Covid-19, as the former was a devastating killer virus whereas the latter only poses a threat to vulnerable populations.

Too Much Statistical Noise

It is certainly worth investigating the noted increase in excess deaths in 2020 as that is obviously a problem. However, the article seems to suggest that Covid-19 was the main causal factor driving increases in death. Although that is certainly a reasonable intuition given that it is a novel virus, clearly there is far more at play.

The main issue to point out is that there were two health crises, not one. Covid-19 is certainly one but we cannot simply ignore the absolutely devastating and unprecedented use of lockdown policies that drastically upended all of society in a way that a virus could never accomplish.

The effects of lockdowns have been thoroughly studied by AIER and in a series of articles I noted just some of the damage to the economy, young people, and the normal functioning of society. All these disruptions led to adverse outcomes whether it be mental health issues, decline in living standards, or even disrupted healthcare procedures. In a press release the CDC noted that in May 2020, it recorded the highest number of drug overdoses ever recorded in a 12-month period.

A study in JAMA notes that although there was a substantial increase in overall deaths in 2020, Covid-19 was only one part of the problem, assuming all Covid deaths are directly attributable to Covid and not a comorbidity.

Some statistics of note are an increase in deaths due to heart disease, unintentional injuries, stroke, and diabetes. Although more investigation would be needed to understand how all of this comes together, it wouldn’t be absurd to believe that lockdown policies led to an increase in deaths due to their many disruptions to normal societal functions.

To cite one example of many, the Mackinac Center Legal Foundation recounts on one of its clients by writing,

“One of the affected medical practices, Grand Health Partners, operates in the Grand Rapids area. It performs endoscopies and other elective surgeries, many of which were deemed nonessential by executive order. Due to the shutdown, many of their patients were not able to receive treatment and have suffered because of it.”

Alongside exploring and cutting through the statistical noise posed by increases in death plausibly related to lockdowns, there still needs to be a discussion on quantifying the Covid-19 death count. Genevieve Briand, an economist at John Hopkins University, was subject to a massive degree of controversy for putting out a flawed but important lecture – later expanded into a research paper – that pointed out among other things that Covid-19 deaths may be inappropriately reclassified as deaths from other leading causes.

This is especially worthy of discussion given that the overwhelming majority of Covid deaths occur with comorbidities amongst eldery populations often nearing or exceeding life expectancy.

The data is clear; 2020 was a horrific year full of death and despair. The New York Times’ article certainly does a great job at starting a conversation about this topic. However, its comparisons of Covid-19 and the 1918 Flu raises more questions than answers. Furthermore its presentation of data regarding increases in deaths requires more context.

Upon further investigation, it is clear that Covid-19 claimed many lives. However, it is also clear that there is a substantial presence of statistical noise from comorbidities and increases in death from other causes. This raises many questions not just about the collateral damage of our policy response, but also about whether we are even operating with the appropriate information to be making such decisions with people’s lives in the first place.

This article, Are Covid Fatalities Comparable with the 1918 Spanish Flu?, was originally published by the American Institute for Economic Research and appears here with permission. Please support their efforts.