Are Gold Rubles Gold or Rubles? 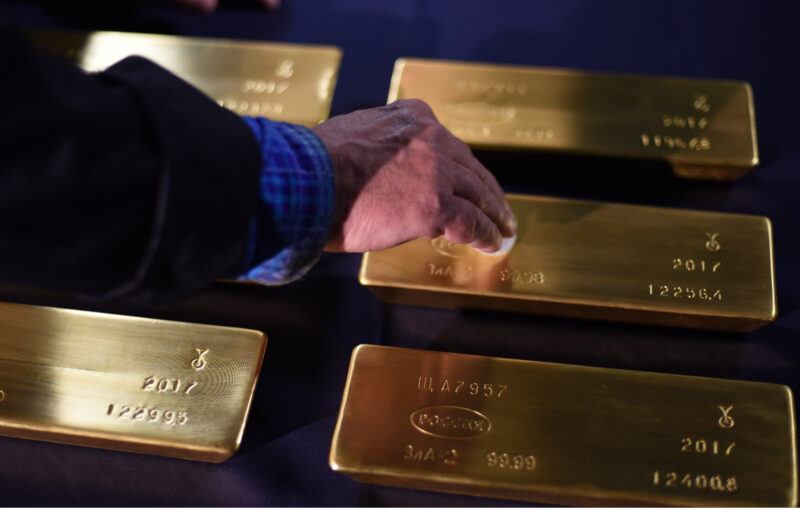 Exactly one hundred years ago, in March 1922, the Soviet “goods” ruble was in its final stages of collapse after years of debasement and economic mismanagement. Facing a hyperinflation and the commensurate inability to calculate economically, the beleaguered People’s Commissariat of Finance deserted it in favor of a new parallel currency: the gold ruble.

A century later, that ground is being retread.

In the wake of the invasion of Ukraine, Russia has been blasted by a series of sanctions which have, save for a few exceptions, severed its connections to the global economy. On top of this has been an unexpected cascade of private firms voluntarily severing business ties with Russia. The Saturday, March 5, 2022 announcement that Visa will stop processing transactions in Russia is an extraordinary blow, let alone atop and among the scores of other public and private firms that have made similar announcements. Mastercard and AMEX joined them shortly thereafter.

While most of the measures applied to punish Russia are not unique, several are; and the application of all of them together is unprecedented. With the exception of transactions for oil, natural gas, and grains, restrictions have been placed upon dealings between US financial institutions, their correspondents, and other associated accounts with Sberbank and Russia’s five largest firms. The Russian central bank, Ministry of Finance, and National Wealth Fund are blocked from accessing their dollar-denominated reserves. Russia has been kicked off of Belgium-based SWIFT, the global, dollar-based international payments system.

Global export control measures have been imposed to limit or completely restrict the flow of capital and intermediate goods into the country, crushing the Russian economy’s productive potential. The financial accounts and assets of Russian President Putin, Foreign Minister Sergei Lavrov, Defense Minister Sergei Shoigu, Chief of the General Staff Valery Gerasimov, and members of Russia’s business elite and their family members have also been targeted.

What is not clear is whether the massive raft of sanctions are tied more closely to the perceived scale of the Russian actions, or derive from the view that the Russian economy has become sanction-resistant since 2014 (when it was sanctioned by the international community over the annexation of Crimea).

What is clear is that the Russian people are facing an economic contraction of major proportions, perhaps closer to a depression than a recession, and that negative spillover effects will be felt far beyond Eastern Europe. And like a century ago, Russian political figures have turned, probably begrudgingly, toward the root, foundational money of humanity: gold.

The Russian ruble broke the 100-to-the-dollar mark last week. With rumors of stiffer than expected resistance on the Ukrainian battlefield, over the last few days the exchange rate has fallen still further to 120 rubles per dollar. It is a long way from the post-Soviet ruble which, between 1991 and the Russian debt default in 1998 traded at a comparably stable three-to-six rubles per dollar.

The choice to exempt certain Russian oil, natural gas, and grain transactions from the SWIFT ban was likely driven by US and Western European concerns about exacerbating rising inflation. In fact, the war itself has driven oil and grain prices up substantially in just two weeks.

Early Monday, March 7th, Brent crude was trading above $120 per barrel and West Texas Intermediate over $116 per barrel: an 82 percent and 90 percent increase in price since January 1st, 2022.

But perhaps the most unanticipated rise has come in wheat. Already rising due to the impact of natural gas prices on fertilizer production, news of cargo ships being sunk in the Black Sea has sent front-month futures to 70-year highs.

The Efficacy of Sanctions

The effectiveness of sanctions over longer periods tends to underwhelm. Like tariffs, they often impact the common person, entrenching political elites as resentment against the imposing foreign powers takes hold. Iran and Venezuela were both targeted by sanctions, but have survived: the analogy of economies as organisms rather than machines obtains as nations evolve and adapt to external restrictions.

The swath of sanctions imposed upon Russia, targeting as they do the financial system, the Russian central bank, and access to the international payment system, have made the difference between “inside” and “outside” money readily apparent. Inside money includes currency reserves, foreign exchange balances at foreign central banks, and government securities held elsewhere. It is money “inside” the global financial system, consequently encompassing the vast majority of all forms of money and securities.

Outside money, accordingly, is limited and distinct: cash and precious metals. Given the collapse of the ruble, Russia’s last financial lifeline is its gold store. The Kremlin announced on March 2nd that it would eliminate the VAT (value-added tax) on gold purchases, removing a considerable barrier to civilian ownership of the precious metal.

There have been some assertions that Russia has returned to a gold standard, which is not the case. If, as the Bolsheviks did 100 years ago this month, a ruble were to be defined as a fixed weight and fineness of gold, with physical and/or digitally-backed gold in common use, it would be the case. And to be sure, something akin to that may eventually materialize.

From a game theoretic perspective it is likely that having demonstrated how dollar dominance can be weaponized almost overnight, there will be an immediate, broad effort among nation-states toward delinking their economies to the extent possible. That effort is likely to include gold, silver, and perhaps cryptocurrencies (although the latter are not outside money owing to on-and-off ramp vulnerability).

As I commented in the introduction to the Summer 2021 Harwood Economic Review (“Is Inflation Back?”),

[w]hen Nixon closed the gold window, he promised that the suspension of dollar convertibility was temporary. I view the last fifty years as a monetary interregnum: a period during which a global experiment extending throughout not only world economies, but the whole of commerce, academia, society, and culture is taking place. Gold will return to monetary preeminence not because it can or should, but because it must. Nixon’s temporary suspension will be exactly that; not because he said so, but rather because at some point there will be no other road forward.

The precipitous loss of citizens’ purchasing power over decades was scarcely enough to drive states to introduce monetary reforms. It is perhaps not surprising that a newly-cast pariah state is embracing gold in a desperate bid to recapture some semblance of normalcy. Whether that trend continues with the introduction of more aspects of the gold standard or disappears when circumstances normalize, the resurgent stature of gold is a welcome prospect in a time where barbarity preponderates.

This article, Are Gold Rubles Gold or Rubles?, was originally published by the American Institute for Economic Research and appears here with permission. Please support their efforts.