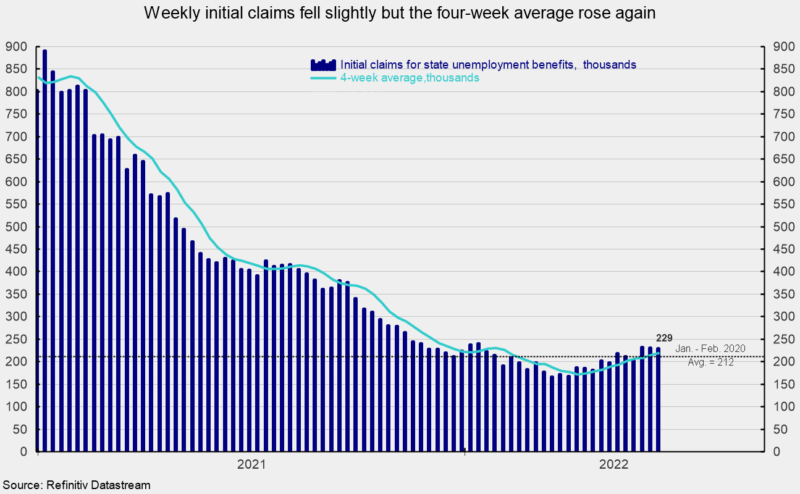 However, the four-week average rose for the tenth time in the last eleven weeks, coming in at 223,500, up 4,500 from the prior week and at the highest level since March 5th. Weekly initial claims data continue to suggest a very tight labor market, though the recent upward trend is a growing concern. The Russian invasion of Ukraine, sustained elevated price increases, and an intensifying Fed tightening cycle represent risks to the economic outlook.

The number of ongoing claims for state unemployment programs totaled 1.268 million for the week ending June 4, a rise of 12,621 from the prior week and the largest weekly gain since February 26 (see second chart). State continuing claims have now risen in three of the last four weeks though the level remains very low (see second chart).

The latest results for the combined Federal and state programs put the total number of people claiming benefits in all unemployment programs at 1.297 million for the week ended June 4, an increase of 14,479 from the prior week. The latest result is the 17th week in a row below 2 million.

Initial claims remain at a very low level by historical comparison, but recent weeks have seen an upward trend become more apparent. Weekly initial claims for unemployment insurance is an AIER leading indicator, and if the trend continues on an upward trajectory, it may be an early warning sign.

Labor shortages and turnover, along with materials shortages, logistical issues, and supply chain disruptions are likely to continue to hamper the growth in production across the economy and sustain upward pressure on prices. The outlook remains highly uncertain.

This article, Average Weekly Initial Claims Continue to Drift Higher, was originally published by the American Institute for Economic Research and appears here with permission. Please support their efforts.