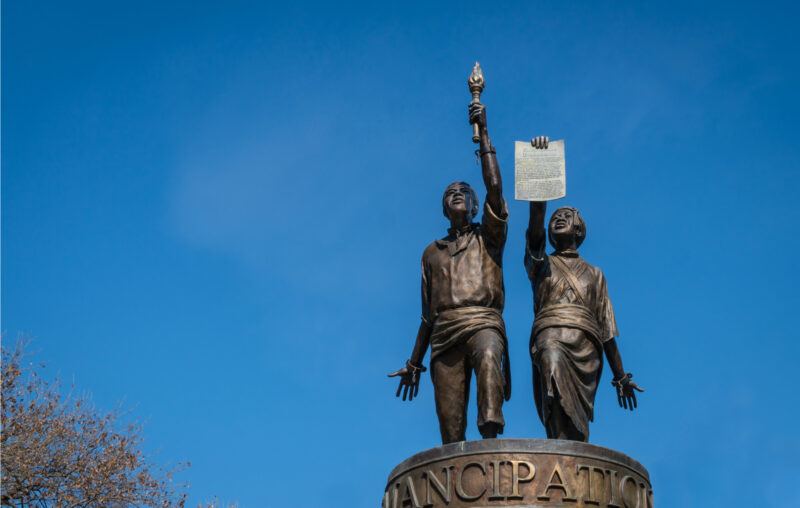 Last year, a fact-checker for the Washington Post questioned U.S. Senator Tim Scott’s (R-SC) claim that his family went “From Cotton to Congress” in one lifetime. Scott’s grandfather, this fact-checker discovered, did in fact own land!

Yes, following emancipation, black land ownership increased in the rural South, in some states dramatically. This history was first developed by Robert Higgs in his magnificent work Competition and Coercion: Blacks in the American Economy 1865-1914 (Cambridge, 1977). Higgs examined the pattern in Georgia. Robert Margo examined several other states (but see Higgs’ rejoinder regarding certain details).

The pattern is actually quite general, and not only in this country but in other places where sharecropping emerged. When land is rented via sharecropping (in which rent is paid with a fraction, often one-half, of the crop), the more diligent farmers do well (as do their landlords). These more diligent farmers tend to come to be owners of land (not necessarily the land they had worked as tenant farmers); and, it was not unusual for the pattern to repeat itself from one generation to the next. That is, for the tenant farmers of one generation to become the landlords of the next generation.

The problem in the South following emancipation wasn’t that blacks were unable to navigate a private property-based, market-oriented economy; but it was segregation, especially of the public schools, and Jim Crow laws in general. Indeed, in spite of the obstacles put in their way, blacks were making progress in catching up to whites in earnings (as can be inferred, historically, in the occupations listed in the US Census, and, more recently, as given directly in the Current Population Survey and other sources), even as whites continued to advance. That is, blacks were catching up to a moving target.

During the 19th century, cotton farming involved long hours of arduous work during cotton-picking season, which runs for about six weeks starting in July in southern Texas, and starting as late as September in the more northern reaches of the cotton belt. Following emancipation, cotton-picking season drew many to the harvest, where good money could be earned. The people drawn included both whites and blacks.

But, by the early 20th century, cotton-picking machines were fast replacing human hands. Nowadays, cotton-pickers ride in the air-conditioned cabs of tractors. It’s that incessant thing we call progress, constantly destroying the old ways as it ushers in increasingly better new ways. In this case, destroying the money-making opportunity that enabled poor people of an earlier time to make ends meet. While some of us remember or are happy to learn about the actual history of the country, others have to be jolted to be disabused of their made-up history.

This article, Black Land Ownership Following Emancipation, was originally published by the American Institute for Economic Research and appears here with permission. Please support their efforts.