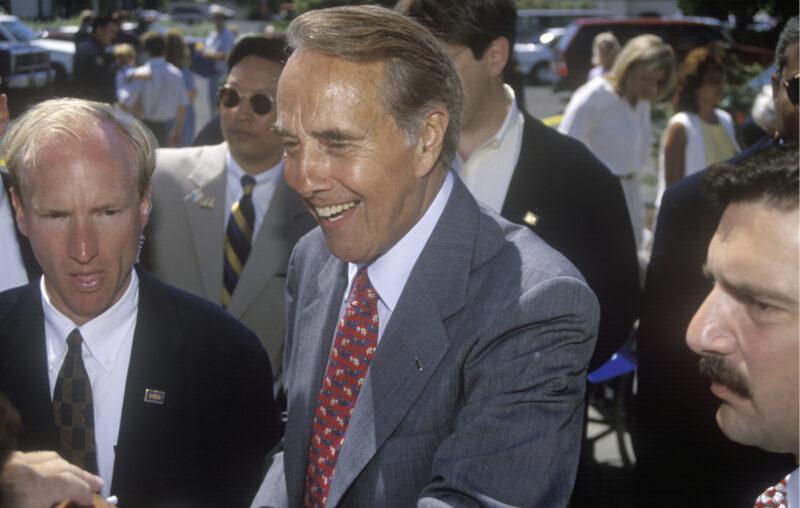 Bob Dole was leader of the Republicans in the Senate from 1985 until 1996. He was the candidate of his party for US President in 1996, and candidate for Vice President in 1976. He also played a key role in the 1974 Richard Nixon resignation.

A consummate Republican, Dole defended Nixon’s presumption of innocence in the Watergate affair right up to the release of tape recordings making it clear that he (Nixon) was involved. Then, sensing that Nixon was disloyal to the Republican Party as well as to the country, Dole turned on Nixon. A delegation of Republicans, led by Barry Goldwater and the Republican leaders in the House and the Senate, went to the White House to inform Nixon that there wouldn’t be the votes to prevent him from being impeached and removed from office. Nixon then resigned.

In 1976, President Gerald Ford named Dole as his running mate in seeking election to the office to which he had ascended upon Nixon’s resignation. The nomination was a bit of a surprise as Dole not only turned on Nixon, but also on Ford for his (Ford’s) quick pardon. The pair started off far behind in the polls. But, with the economy recovering from the latest bout of stagflation, they lost by only 2 points, 50 to 48 percent.

Dole was not an exception to the rule that once a person is bitten by the Presidential bug, there is no cure. In 1980 and again in 1988, he sought the Republican nomination but was forced out of the process early. Then, in 1996, he got yet another opportunity.

The Republicans entered the Presidential cycle in great shape. In 1994, they gained control of the US House of Representatives for the first time in forty years. The following year, led by Newt Gingrich, the Republicans confronted President Bill Clinton and the Democrats with their ambitious “Contract with America.” The confrontation led to vetos and shutdowns of the federal government. And Clinton defty “triangulated” social and economic differences with the Republicans. In the meanwhile, Clinton was riding high in the polls due to a strong economic recovery. Ironically, it could be argued, the recovery was propelled by tax cuts and welfare reforms pushed through by the Republicans.

As the election drew near, it looked as though the Democrats would win a smashing victory. But Dole, an old man even back then, with a debilitating injury suffered in battle during World War II, embarked on an extraordinary “campaignathon.” Through the weekend prior to the election, for 96 hours straight, Dole made his way across the country, starting in New Jersey, and ending in California. He travelled by car, train, plane, motorcycle, boat, and horse. At each stop, he joined with local Republicans, and made the election a nationwide team effort. And while he lost, the Republicans kept their majorities in the House and the Senate.

Always a warrior, there was no defeat in this man.

Bob Dole was a fine Midwestern Republican man. He was also a product of World War II. Many of the veterans of that war were imbued with virtues of duty and loyalty. They kept their feelings mostly to themselves. In accepting the Republican nomination, Dole teared up thinking of the time his father visited him at a veterans’ hospital in Detroit, while he was recovering from his wounds. But the tear was held back. Emotions were kept private by the men of that generation.

This article, Bob Dole, a Remembrance, was originally published by the American Institute for Economic Research and appears here with permission. Please support their efforts.