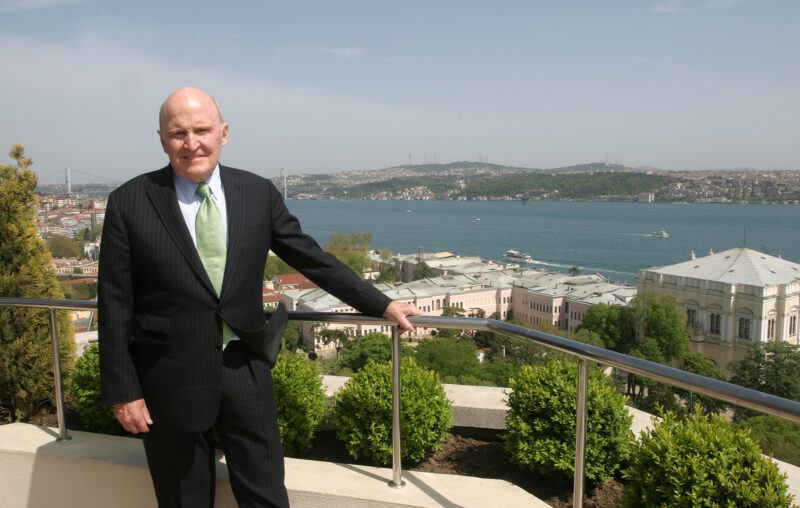 When he was CEO of Coca-Cola the late Roberto Goizueta was obsessively focused on making his shareholders rich. There was no talk of “stakeholder capitalism,” about Coke’s community endeavors, or jobs created. Goizueta spent his days working diligently for those who’d directed their savings to Coke, and was criticized for doing just that. It was supposedly heartless to focus on profits over people…

Actually, thank goodness for Roberto Goizueta. During his years as Chief Executive from 1981 to 1997, the value of Coca-Cola soared from $4 billion to $145 billion. And in the process, Atlanta (where Coke is headquartered) was transformed. All manner of cultural landmarks have Woodruff affixed to them, thanks to the enormous leaps in philanthropy from the heirs of Robert Woodruff (President of Coca-Cola from 1923-1985), and who watched the value of their Coke shares surge during Goizueta’s time as CEO. To walk through Emory University is to see Goizueta seemingly everywhere one looks on account of the University having one of the largest endowments in the world thanks to its major exposure to Coke shares, exposure that subsequently funded all manner of scholarships for Emory students. And then there’s the story of a pediatrician named Bill Warren. Warren was gifted with Coke shares at an early age, only to watch the value of them powerfully rise in the 1980s and 90s. The latter provided him with the financial freedom to shut down his medical practice, only to devote his time to helping inner-city Atlanta families with their medical struggles.

Goizueta’s remarkable achievements come to mind while reading New York Times columnist David Gelles’s recent attack on the late Jack Welch. Aiming to promote his new book titled The Man Who Broke Capitalism, all Gelles really does is signal to potential buyers that they’ll read little that they haven’t read before. And that taught them very little the numerous times they first read about the alleged horrors of profit-motivated company heads. Same criticism of obsessive profit focus, different CEO.

In trite and easily imitable fashion, Gelles writes of how Welch’s career was “defined by devotion to maximizing short-term profits at any cost.” Where have we heard that one before? If you’re looking for originality, this is the wrong book.

After which, Gelles contradicts himself. Indeed, in acknowledging that the value of GE rose from $14 billion to $600 billion during Welch’s time in the CEO seat, Gelles unwittingly revealed just how future-looking Welch was in operating the company. As any investor could have explained to Gelles, the popular notion of “quarterly capitalism” whereby profits are maximized without regard to the long term is not the path to shareholder adulation. That’s the case because stock prices are a speculation about all the dollars a company will earn in the future. Since they are, actions taken for short-term gain at the expense of long-term health are logically met with reduced valuations.

If anyone doubts this, all they need to do is consider Amazon. Gelles may be too young to remember its early days as a public company, but a popular quip was that Amazon was “Amazon.org.” Get it? Except that during its long stretch sans profits, Amazon’s shares did quite well given investor confidence that Jeff Bezos was setting the company up for strong earnings in the future. That GE’s shares did so well while Welch was in control was evidence from those with actual skin in the game that Welch had his eye very profitably focused on tomorrow.

Instead of acknowledging this truth, Gelles retreats to the unoriginality that he’s so familiar with. He claims Welch’s focus on shareholders “did more harm than good” for him “fueling GE’s growth with a relentless series of mergers and acquisitions that took GE from its industrial roots and set in motion of a wave of corporate consolidation that would reduce competition in industries as diverse as airlines and media.” Books could be written, but with brevity somewhat in mind it will be said that in modernizing GE, Welch saved it. Really, what are the businesses that have ever been elevated by an embrace of stasis? Regarding reduced competition, when Welch took over GE a great deal more Americans hadn’t flown on an airplane relative to those who had, and then television was largely limited to three networks. Fast forward to the present and flight anywhere is the inexpensive norm, plus it’s not unrealistic to suggest that “television” will go the way of typewriter and payphone so varied are the myriad media concepts competing for our eyeballs all the time, anywhere, and on devices not sitting in our family rooms.

Ever uncomfortable with any thoughts that haven’t been written thousands of times before by other ankle-biting business journalists, Gelles laments Welch’s “skewed priorities” that, among other things, led to “stagnant wages” and “factories closed” across the U.S. Gelles’s assertion is that Welch created a low wage, factory-closing trend among copycat CEOs, but what could he mean? If we ignore that GE’s reputation under Welch was “Generous Electric,” we can’t ignore that for any business anywhere in the world, the always and everywhere goal for the ambitious ones is to achieve market share in the United States. Please think about this truth. If the world is really and truly fighting to meet the needs of the American people, could it really be true what Gelles writes about “stagnant wages” across the U.S. since Welch took over at GE?

As for “factories closed,” one hundred years ago New York City was the U.S.’s foremost manufacturing locale. It’s not today. The nuance is surely lost on Gelles, but what wrecks cities, states and countries is not the closure of a factory, but clinging to them. New York City thrives precisely because it left the past in the past. That’s what attracts talent. “Factories closed” haven’t left U.S. cities behind, but the departure of talented human capital in pursuit of better work opportunities has. Gelles would shudder, but in lamenting “factories closed” he’s channeling Donald Trump.

Gelles channels Trump yet again with his critique of Welch disciples and their embrace of “outsourcing,” and does so while ignoring that his very own New York Times outsources the printing of its newspaper to myriad plants around the U.S. Thankfully it does. It’s a great newspaper and the outsourcing means more and more of us get to read the physical product each day. Work divided is called progress. Jobs aren’t finite as Gelles imagines. They’re a consequence of investment, and investment follows productivity.

Gelles adds that most of Welch’s disciples “failed” once in the CEO seat, only for him to predictably miss the point. Of course most of them failed. That they did explains Welch’s enormous pay, and also that of Goizueta, Steve Jobs, and countless others. If just anyone could be brilliant in the CEO seat, this would be reflected in reduced compensation.

At the same time, Welch’s spectacular stint as CEO redefined for investors just how much CEOs could accomplish. As a result, the search for the next Welch naturally took flight. This explains why so many “failed” CEOs are well-compensated today. To simplify things for Gelles, quarterbacks are paid enormous salaries too even though most are busts. Those with the mere potential to transform a business or team will enjoy a big line of suitors.

In writing a critique of Welch, Gelles forgot basic economics. Or never got around to learning it. But what should shame him the most is that he’s just so obvious.

This article, CEOs like the Late Jack Welch Embody the Endless Possibilities of Capitalism, was originally published by the American Institute for Economic Research and appears here with permission. Please support their efforts.