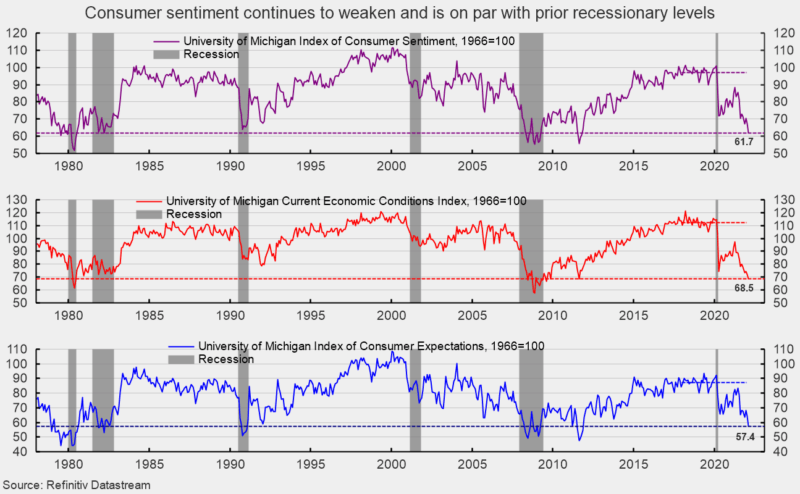 The preliminary February results from the University of Michigan Surveys of Consumers show overall consumer sentiment fell sharply in early February, hitting the lowest level since October 2011 (see top of first chart). The composite consumer sentiment decreased to 61.7 in early February, down from 67.2 in January, a drop of 8.2 percent. The index is now 19.7 percent below the year ago level and 36.5 percent below the 2018 – 2019 average.

All three indexes are now below the lows seen in four of the last six recessions (see first chart).

According to the report, “The recent declines have been driven by weakening personal financial prospects, largely due to rising inflation, less confidence in the government’s economic policies, and the least favorable long-term economic outlook in a decade.” The report goes on to add, “Importantly, the entire February decline was among households with incomes of $100,000 or more; their Sentiment Index fell by 16.1% from last month, and 27.5% from last year.”

According to the report, “The impact of higher inflation on personal finances was spontaneously cited by one-third of all consumers, with nearly half of all consumers expecting declines in their inflation adjusted incomes during the year ahead. In addition, fewer households cited rising net household wealth since the pandemic low in May 2020, largely due to the falling likelihood of stock price increases in 2022.”

The report adds, “The recent declines have meant that the Sentiment Index now signals the onset of a sustained downturn in consumer spending. The depth of the slump, however, is subject to several caveats that have not been present in prior downturns: the impact of unspent stimulus funds, the partisan distortion of expectations, and the pandemic’s disruption of spending and work patterns.”

The substantial declines in consumer sentiment reflect the impact of higher consumer prices. The surge in prices for many consumer goods and services is largely a function of shortages of materials, a tight labor market, and logistical issues that prevent supply from meeting demand. Price pressures will likely ease as production returns to normal and logistical issues are resolved, but the process may take an extended period. In the meantime, risks remain elevated with weak consumer sentiment due to rising prices, deep and growing partisan attitudes driving up hostility and intolerance among the general public, and a soon-to-be-initiated Fed tightening cycle that increases the risk of a policy mistake.

This article, Consumer Sentiment Fell Sharply in Early February, was originally published by the American Institute for Economic Research and appears here with permission. Please support their efforts.