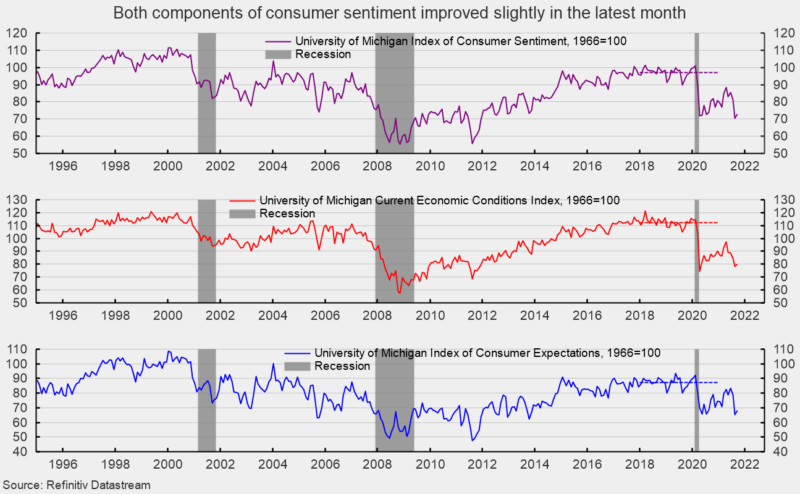 The final September results from the University of Michigan Surveys of Consumers show overall consumer sentiment rose slightly in September following back-to-back declines in July and August. The August plunge was largely a result of growing fears of the recent surge in Covid. According to the report, “Consumer sentiment edged upward in late September, although the overall gain still meant the continuation of depressed optimism, initially sparked by the Delta variant and supported by persistent inflation and unfavorable long-term prospects for the national economy.”

Overall consumer sentiment increased to 72.8 in September, up from 70.3 in August (see top of first chart), a 3.6 percent gain. From a year ago, the index is down 9.5 percent.

The current-economic-conditions index rose to 80.1 from 78.5 in August (see middle of first chart). That is a 2.0 percent rise and leaves the index with an 8.8 percent decrease from September 2020.

The second sub-index — that of consumer expectations, one of the AIER leading indicators — regained 3.0 points or 4.6 percent for the month, rising to 68.1 (see bottom of first chart).

With regard to the economic outlook, the report adds, “Consumers do not view economic conditions as conducive to establishing an inflationary psychology, a self-fulfilling prophecy. Instead, consumers have favored postponement due to what they still consider a transient spike in prices. While this reaction may well fade in the months ahead, the shift toward postponement of purchases has been so significant that it could not be quickly reversed.”

The weaker readings in consumer sentiment reflect the one-two punch of the sharp rise in new Covid cases and the sticker shock of higher consumer prices. The surge in new Covid cases may be easing already. However, the higher prices for many consumer goods, resulting from shortages of materials, a tight labor market, and logistical issues, are likely to linger for a while. Deferring purchases under the belief that price pressures are transient will help reduce pressures more quickly.

This article, Consumer Sentiment Improved in September but Remains Low, was originally published by the American Institute for Economic Research and appears here with permission. Please support their efforts.