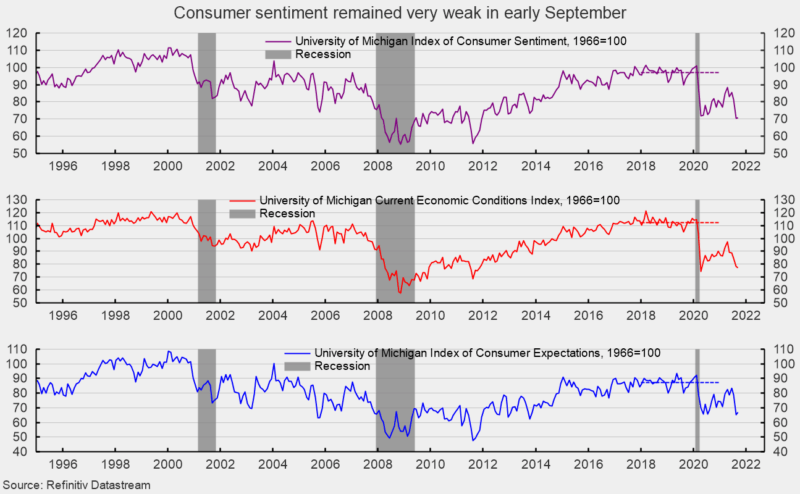 The preliminary September results from the University of Michigan Surveys of Consumers show overall consumer sentiment rose slightly in early September following a steep plunge in August. The August plunge was largely a result of growing fears of the recent surge in Covid while September remained weak mostly due to fears of rising prices.

Overall consumer sentiment increased to 71.0 in early September, up from 70.3 in August (see top of first chart), a 1.0 percent gain. From a year ago, the index is down 11.7 percent.

The current-economic-conditions index fell to 77.1 from 78.5 in August (see middle of first chart). That is a 1.8 percent decline and leaves the index with a 12.2 percent decrease from September 2020.

The second sub-index — that of consumer expectations, one of the AIER leading indicators — regained 2.0 points or 3.1 percent for the month, rising to 67.1 (see bottom of first chart).

According to the report, “The steep August falloff in consumer sentiment ended in early September, but the small gain still meant that consumers expected the least favorable economic prospects in more than a decade.” The report goes on to add, “Just two components posted additional declines: buying attitudes for household durables fell again in early September to a low reached only once before in 1980, and long term economic prospects fell to a decade low. The decline in assessments of buying conditions for homes, vehicles, and household durables left all three near all-time record lows, with the declines due to spontaneous references to high prices.”

With regard to the economic outlook, the report adds, “Emotions have long been known to speed responses, the so-called fight or flight response, which was the adaptive function they performed in early August. Many other sources of economic data have since shifted in the same direction, and point toward slower growth in consumer expenditures and purchases of housing to the end of 2021.”

The weaker readings in consumer sentiment in recent months reflect the one-two punch of the sharp rise in new Covid cases and the sticker shock of higher consumer prices. The surge in new Covid cases may be easing already though the numbers are elevated and fallout including deaths and overflowing hospitals will take longer to fade. Longer still will be the higher prices for many consumer goods as shortages on materials, a tight labor market, and logistical issues prevent supply from meeting demand. Price pressures will ease as production returns to normal, but the process may take an extended period.

This article, Consumer Sentiment Improved Slightly but Remained Low in Early September, was originally published by the American Institute for Economic Research and appears here with permission. Please support their efforts.