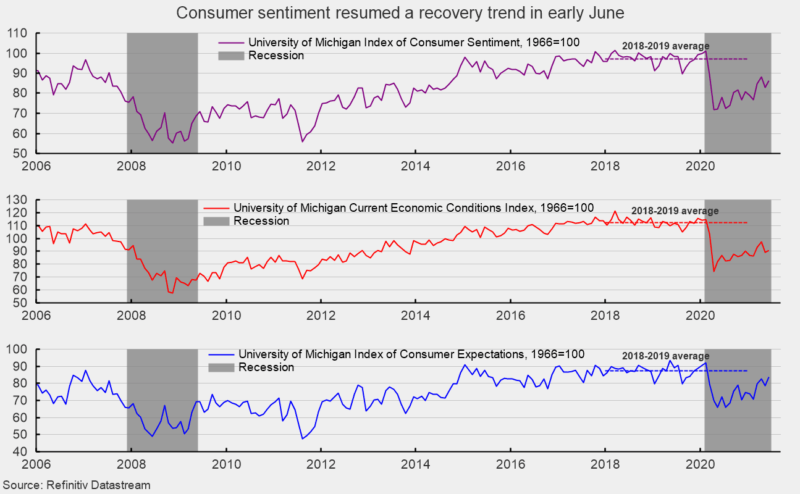 The preliminary results from the University of Michigan Surveys of Consumers show overall consumer sentiment rebounded in early June, resuming the recovery trend from the April 2020 low. However, fears over rising prices continue, and the current levels of the index and the components remain below the pre-pandemic levels.

Overall consumer sentiment increased to 86.4 in early June, up from 82.9 in May, a 4.2 percent rise (see top chart). From a year ago, the index is up 10.6 percent. The sub-indexes both increased in early June. The current-economic-conditions index rose to 90.6 from 89.4 in May (see second chart). That is a 1.3 percent gain and leaves the index with a 4.0 percent increase from June 2020. The second sub-index — that of consumer expectations, one of the AIER leading indicators, added 5.0 points or a 6.3 percent gain for the month to 83.8 (see third chart) and is 15.9 percent above the prior year.

According to the report, “The early June gain was mainly among middle- and upper-income households and for future economic prospects rather than current conditions. Stronger growth in the national economy was anticipated, with an all-time record number of consumers anticipating a net decline in unemployment.” However, the report goes on to add, “Rising inflation remained a top concern of consumers, although the expected rate of inflation declined in early June. Spontaneous references to market prices for homes, vehicles, and household durables fell to their worst level since the all-time record in November 1974.” Furthermore, the report adds,” These unfavorable perceptions of market prices reduced overall buying attitudes for vehicles and homes to their lowest point since 1982.” The report concludes, “Fortunately, in the emergence from the pandemic, consumers are temporarily less sensitive to prices due to pent-up demand and record savings as well as improved job and income prospects.”

A resurgence in consumer demand as the economy reopens, coming at the same time as a confluence of logistical and labor issues, material shortages, and dramatic shifts in consumer spending habits, are combining to push up prices and influence consumer attitudes. The pressures may continue for a time but are likely to fade as market forces redirect productive capacity. Given the vastly different structure of the economy today, a 1970s-style inflationary spiral remains unlikely. Furthermore, the negative impact of anticipated price increases is dominated by improving expectations for the economy, jobs, and income. The overall outlook remains tilted to the upside.

This article, Consumer Sentiment Rebounded in Early June as Consumer Grew More Optimistic About the Economy, was originally published by the American Institute for Economic Research and appears here with permission. Please support their efforts.

Here Are Six Reasons Why Inflation Will Not Be Transitory