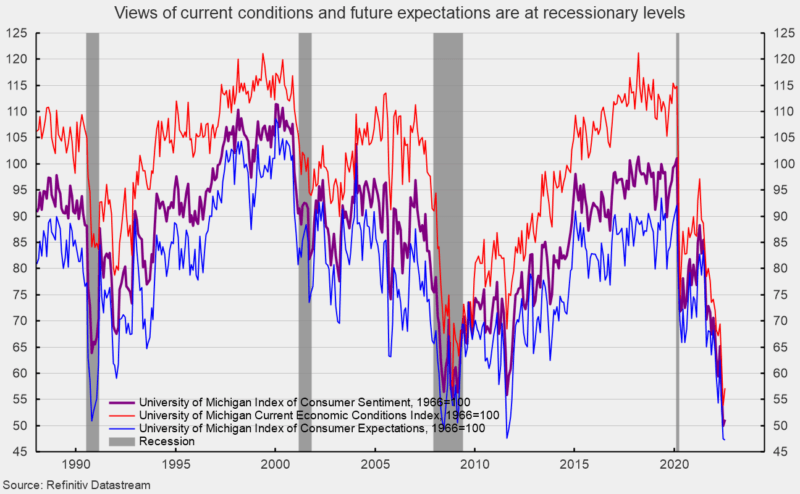 The preliminary July results from the University of Michigan Surveys of Consumers show overall consumer sentiment ticked up in early July but remains near record lows (see first chart). The composite consumer sentiment increased to 51.1 in early July, up from the record low 50.0 in June, a rise of 1.1 points or 2.2 percent. The index is consistent with prior recessions.

The current-economic-conditions index rose to 57.1 from the record-low 53.8 in June (see first chart). That is a 3.3-point or 6.1 percent increase for the month. The index is slightly above the record low but remains consistent with prior recessions.

The second sub-index — that of consumer expectations, one of the AIER leading indicators — lost 0.2 points or 0.4 percent for the month, dropping to 47.3 (see first chart). The index is at its lowest level since May 1980.

According to the report, “Consumer sentiment was relatively unchanged, remaining near all-time lows. Current assessments of personal finances continued to deteriorate, reaching its lowest point since 2011.” The report goes on to add, “Buying conditions for durables adjusted upwards, owing both to consumers who cited easing supply constraints and those who believed that one should buy now to avoid future price increases, which would exacerbate inflation going forward. Even with the adjustment, buying conditions remained 26% lower than a year ago.”

The one-year inflation expectations fell to 5.2 percent in early July. That is the second decline in the last three months since hitting back-to-back readings of 5.4 percent in March and April. The one-year expectations has spiked above 3.5 percent several times since 2005, only to fall back (see second chart).

The five-year inflation expectations fell back to 2.8 percent in early July. That result is the lowest reading since July 2021 and leaves it near the mid-point of the 25-year range of 2.2 percent to 3.5 percent (see second chart).

The report states, “Consumers remained in agreement over the deleterious effect of prices on their personal finances. The share of consumers blaming inflation for eroding their living standards continued its rise to 49%, matching the all-time high reached during the Great Recession. These negative views endured in the face of the recent moderation in gas prices at the pump.”

The report adds, “Inflation uncertainty continued to grow, with 26% of consumers expecting prices to stay the same or fall over the next 5 to 10 years, up from 11% a year ago.”

The plunge in consumer attitudes reflects a confluence of events with inflation leading the pack. Persistently elevated rates of price increases affect consumer and business decision-making and distort economic activity. Overall, economic risks remain elevated due to the impact of inflation, an intensifying Fed tightening cycle, continued fallout from the Russian invasion of Ukraine, and waves of new Covid-19 cases and lockdowns in China. The ramping up of negative political ads as the midterm elections approach July may also weigh on consumer sentiment in the coming months. The overall economic outlook remains highly uncertain. Caution is warranted.

This article, Consumer Sentiment Remained Near Record Lows in Early July, was originally published by the American Institute for Economic Research and appears here with permission. Please support their efforts.