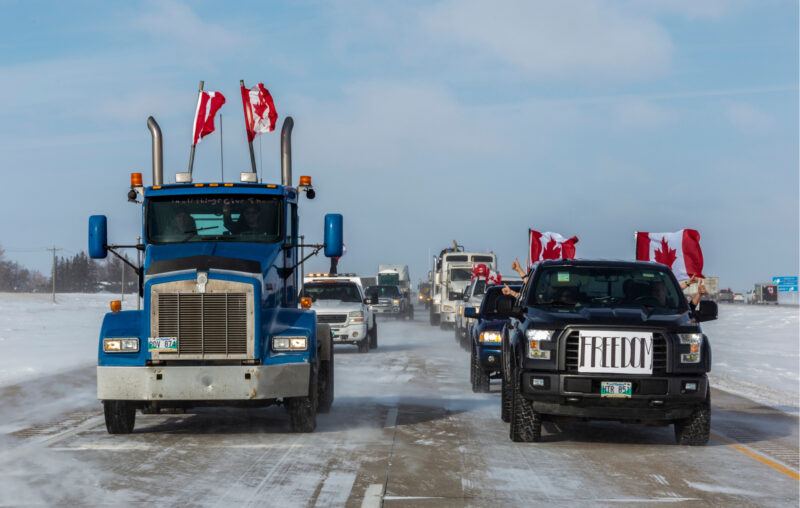 Americans aged about 45 or older may dimly recall a song from the mid-1970s called “Convoy.” It was a campy part of the genre called Outlaw Country that leveraged the CB radio and lingo (10-4 good buddy) crazes then sweeping the country. I could explain every line to you in intricate detail, even the one about swindle sheets, but here instead concentrate on the song’s climax, when a mighty convoy of a thousand screaming trucks crosses the Jersey line by crashing the toll gate doing 98.

Like Paper Lace’s “The Night Chicago Died,” a pro-po po ballad narrated from the perspective of the son of a police officer involved in an epic shootout with Al Capone’s gang, “Convoy” doesn’t depict a specific incident but rather evokes folk memories to stir the mood of the masses. “Convoy’s” lack of specificity potentially endows the song with a timeless quality, but few have invoked it in reference to the epic convoys currently protesting Canada’s Covid policies in Ottawa and several border crossings. Frankly, Twisted Sister’s “We’re Not Going to Take It,” sung here by protestors in Ireland, is much catchier.

But of course the Freedom Convoy is about so much more than finding the right anthem for the anti-mandate movement. What began as a very belated show of mutual commitment has evolved into a grown up version of an “occupy” movement, like the ones that swept major U.S. cities in 2011 and chopped up Seattle and Portland in 2020.

I say “grown up” because the truckers are not living in tents on the sidewalk, snapping their fingers, or chilling in warm weather while making meaningless declarations of independence or vague policy demands. The truckers are honking their horns in dangerously frigid temperatures while seriously disrupting Canada’s domestic and international trade. Most importantly, they have a single, clear and just demand: freedom!

The convoy protestors want freedom from senseless, unscientific Covid restrictions and mandates and freedom from a ruling class that ignores their own rules and treats everyday Canadians with derision and disrespect by painting what are truly mostly peaceful protestors as members of a deranged fringe of white supremacists. Instead of using the protests as a way to save face while lifting their senseless Covid policies, Canada’s leaders have doubled down yet again. That is too easy to do today when the worst that happens to politicians is that they lose their jobs.

Canada has a long, though mostly forgotten, history of protest against corrupt leaders, including the rebellions of 1837-38. Like Americans, Canadians would not hesitate to subject wayward politicians to nightly charivari or “rough music.” In the most egregious cases, they destroyed politicians’ personal property, including torching their houses or pulling them down with ropes, which was safer for neighbors and lowered rebuilding costs. The notion was that politicians must pay, personally, if they, and those who follow them into office, are to relearn the lesson they had forgotten, that they are the servants of the people, not their overlords.

As servants of the people, leaders should resign in disgrace if they ever anger enough people enough to induce them to take extreme actions like blockading the seat of government for weeks. Prime Minister Trudeau fled the capital, not out of fear for his life but out of shame. The moment those 10,000 screaming trucks entered Ottawa, his leadership failure became palpable to all.

Thousands of Canadian citizens have been calling (literally, on the phone) for Trudeau’s ouster ever since. Perhaps another vote of no confidence, the parliamentary equivalent of a recall, will free Canadians from the vaccine mandates, which at this point make no more sense than amputating the arms of New Yorkers to stop the recent spate of subway platform murders.

But if getting kicked out of office into lucrative book, TV, and speaking deals is all that happens to tyrants, what is to prevent the next PM, like the new governor of New York, from continuing unconscionable and failed policies? I recently suggested “fizzlicking” (replacing) failed health agencies, but what can be done with their leaders?

Nobody wants to contemplate violence, even libertarians who know the non-aggression principle is a tit-for-tat strategy and not absolute pacifism. So I am going to suggest, once again, implementation of a bonding mechanism. Instead of a mere oath to uphold the Constitution (or Canada’s Charter of Rights), politicians should pledge their entire net worth that they will not violate the law. That should make them timid when it comes to policy experimentation, like lockdowns and forced mass vaccination during a pandemic, which is exactly the check the people need.

This article, Convoy!, was originally published by the American Institute for Economic Research and appears here with permission. Please support their efforts.

The NHS's Most Serious (and Avoidable) Errors Of 2021