Corporate Profits Hit a Record High in the Third Quarter 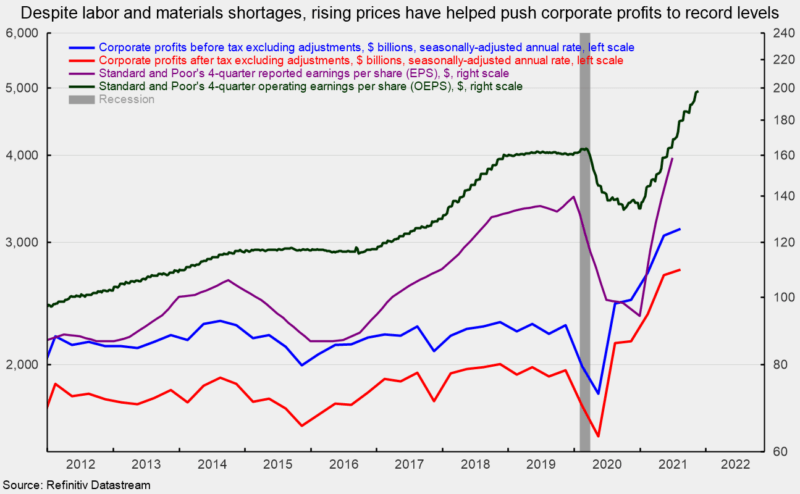 U.S. corporate profits before tax and excluding adjustments for capital consumption and inventory valuation rose to a record-high $3,139.1 billion at a seasonally-adjusted annual rate in the third quarter, as shown in the National Income and Product Accounts from the U.S. Bureau of Economic Analysis (see chart). That’s a 2.3 percent increase from the second quarter and a 28.2 percent rise from a year ago. It is also 37.7 percent above the fourth quarter of 2019, before any impacts from the pandemic.

U.S. corporate profits after tax and excluding adjustments for capital consumption and inventory valuation rose to a record-high $2,742.1 billion, also a record high, up 1.9 percent from the second quarter and 27.7 percent from a year ago (see chart). Compared to the pre-pandemic final quarter of 2019, third-quarter after-tax profits are up 39.6 percent. Despite a tight labor market and rising input costs, companies have been able to generate record levels of profits.

The measures from the National Income and Product Accounts are confirmed by the strong performance of both reported earnings per share (EPS) and operating earnings per share (OEPS) for the Standard and Poor’s 500. Reports EPS totaled $158.76 for the four quarters through the second quarter of 2021 (see chart). That is a 23.8 percent gain versus the four quarters ending first quarter 2021 and a 60.0 percent jump versus the four quarters ending in the second quarter of 2020. Finally, operating EPS are also at a record high, totaling $198.06 based on weekly estimates for the most recently reported 4-quarter trailing results through November 19, 2021 (see chart).

It may be that companies are not only passing along higher costs to consumers, but also taking advantage of consumers’ willingness to pay higher prices and using current conditions to boost profit margins.

This article, Corporate Profits Hit a Record High in the Third Quarter, was originally published by the American Institute for Economic Research and appears here with permission. Please support their efforts.