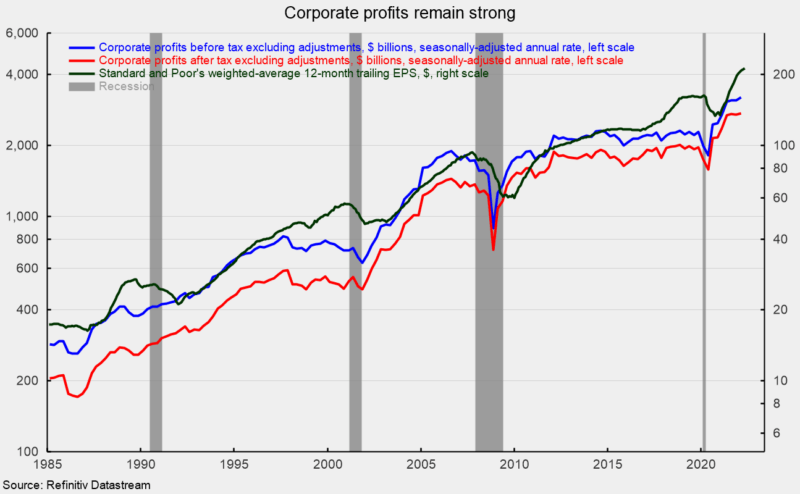 U.S. corporate profits before tax and excluding adjustments for capital consumption and inventory valuation rose to a record-high $3,192.5 billion at a seasonally-adjusted annual rate in the first quarter, as shown in the National Income and Product Accounts from the U.S. Bureau of Economic Analysis (see first chart). That’s a 2.7 percent increase from the fourth quarter and a 17.7 percent rise from a year ago.

U.S. corporate profits after tax and excluding adjustments for capital consumption and inventory valuation rose to a record-high $2,740.1 billion, up 1.5 percent from the fourth quarter and 15.7 percent from a year ago (see first chart). Despite a tight labor market and rising input costs, companies have been able to generate record levels of profits.

The measures from the National Income and Product Accounts are confirmed by the strong performance of earnings per share (EPS) for the Standard and Poor’s 500. Earnings per share (EPS) on a weighted-average twelve-month trailing basis were $210.30 through the end of March, and $212.70 through the end of April (see first chart). That is a 38.6 percent gain versus the year-ago level.

Furthermore, profit margins for the S&P 500 are also holding at a high level. Weighted-average twelve-month trailing EPS as a percentage of weighted-average twelve-month trailing sales per share (SPS) was holding above 13 percent in 2022 (see second chart). It appears that companies are able to pass along enough of their higher costs to consumers to sustain strong profit margins.

This article, Corporate Profits Remained Strong in the First Quarter, was originally published by the American Institute for Economic Research and appears here with permission. Please support their efforts.