COVID-19 and the Labor Market 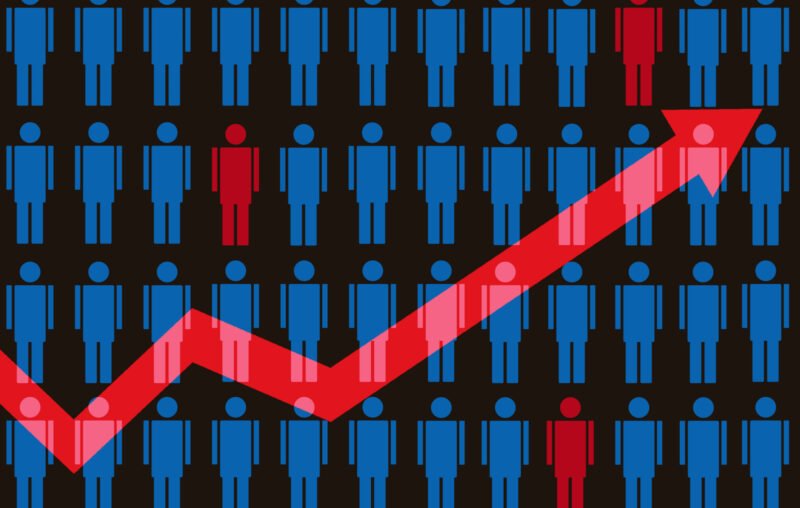 Two things any observer would take away from recent news media reports on the US economy are today’s high inflation and low unemployment. GDP has been growing, though not too robustly, since it collapsed in 2020 due to the pandemic lockdowns. Unemployment always rises in a recession, often taking up to two years to fall back to pre-recession levels. The recession is considered over once output starts growing again, but above-normal unemployment usually persists for one or two years. The COVID-19 recession was a fairly exceptional event, and its uniqueness and severity can only be appreciated by looking at its impact on employment and labor markets.

Figure 1 shows the total number of employed people in the US, excluding farmers and agricultural workers, from 2000 to 2022. This series peaks at or near the start of each recession, indicated by the gray bars. Following the 2001 tech-bubble recession and the 2007-2009 Great Recession, total non-farm employment continued to fall even after these recessions were officially over, only starting to grow again many months after the end of each recession.

Monetary policy makers prime the economy for a recession by keeping interest rates too low for too long. This artificially cheap credit, and the fact that there is too much of it, enables firms to over-optimistically overexpand their operations. This overexpansion creates additional demand for labor, lowering unemployment. When a normal recession hits, markets correct to make up for firms’ unsustainable expansion. Some firms realize they were too optimistic about the demand their product will face, or the cost of producing it. They respond by cutting back on production and laying off workers, raising unemployment. This starts a necessary retrenchment process that ripples throughout the economy as newly laid-off workers see their incomes reduced, and in turn cut down on consumption spending, further cooling the economy in a vicious cycle. Firms need to stop unsustainable production, and take stock of their newly-revealed economic reality to frame and start new production plans that will be more sustainable and realistic. This is the foundation for sustained economic growth.

During the recovery from a recession, GDP rises before employment as firms initially increase output by working already-hired employees more intensively, perhaps by giving some more hours or others more overtime. As the recovery continues, demand for output eventually rises enough that firms find they have to hire more workers to meet the growing demand. Figure 1, US non-farm employment, exhibits a strong trend over time as both the population and economy have grown over the long run. Recessions can be thought of as occasional bouts of traffic congestion, perhaps caused by much-needed but poorly-planned—and inconvenient—road repairs. These are temporary disruptions to economic growth, where drops in GDP are accompanied by increases in unemployment; that is, by decreases in employment. If this employment series were extended back past 2000, the long-term trend would be even more obvious.

The long-term trend can be removed by dividing total employment by a related series with a similar trend, in this case population. Figure 2 shows the employment-to-population ratio from 2000 to 2022. This is the ratio of all employed persons, now including agriculture, divided by the total adult population. This ratio shows more clearly the destructive, long-term impact of each of the three recessions in the period covered. Figure 2 shows that this ratio has partially recovered from the COVID-19 recession, but it still has a way to go to reach its pre-recession value—it gives a clearer picture of how far we have to go than Figure 1. If we extended this series back before 2000, we would see that the ratio grew steadily from about 1960-1980, primarily because during that period women joined the labor force in increasing numbers, peaking at about 70 percent by 1985, but then fell below 65 percent by the turn of the century. The ratio falls sharply to varying degrees during each recession, and then grows slowly as the economy recovers.

Notice that the employment-to-population ratio peaked almost a year before the 2001 recession. It was already falling before the official start of the recession, continuing to fall for nearly two years after the recession’s official end. The tech-bubble recession of 2001 saw the ratio fall from roughly 65 to 62 percent, and over the recovery leading up to the Great Recession it really did not recover much, only rising to about 63 percent by the end of 2006. The fact that the ratio never fully recovered suggests that the mild 2001 recession brought about permanent structural changes in the economy. During this period the tech sector continued to grow, though many firms outsourced tech employment overseas. Finance, construction, and real estate development also grew. US manufacturing became increasingly automated, producing a growing value of total manufactured output, but not necessarily adding workers.

Similarly with the 2007-2009 Great Recession, the ratio peaked nearly a year before the recession’s official start, continuing to fall until 2010. The ratio did not really grow or recover, reaching a roughly 57-58 percent lower plateau from 2010-2014. The recovery after that was very gradual. Although the economy was gaining jobs during the recovery, the US population grew nearly as fast, keeping the employment-to-population ratio at 50-year lows until the pandemic hit.

The COVID-19 recession reduced this ratio down to almost 50 percent, but fortunately it has recovered rapidly. Employment fell so dramatically in 2020 because of drastic emergency lockdowns of so-called nonessential businesses, disproportionately affecting transportation, hospitality, tourism, recreation, and restaurant sectors. Although government stimulus and relief funds lessened the lockdowns’ financial impact, they were poorly administered. All households received stimulus payments, which were not means tested, so households with uninterrupted incomes received the same payments as those that lost jobs for the duration of the crisis.

Firms were eligible to apply for stimulus and paycheck protection grants—euphemistically called loans but never intended for repayment—but many that should have been prioritized were not eligible and others that did not need the grants got them. As a result many businesses had to close completely and have never reopened. Some restaurants switched to an exclusively takeout or delivery model, enabling them to reduce their waitstaff, and in many cases enhancing their profit margins, even on reduced sales. The impact of lockdown policies have been borne disproportionately by poorer households, falling on blue collar workers who were more likely to be laid off completely. In most cases, white collar workers worked from home without any loss of income. The burden also fell disproportionately on minorities and disadvantaged groups, further amplifying prevailing income inequality.

The pandemic also provided business opportunities for alert entrepreneurs, as disinfection services, food and product deliveries, teleconferencing services, etc., faced dramatic increases in demand. Zoom was a relatively little-known, little-used video meeting software, use of which exploded. As the recovery progresses, many firms are now having difficulty finding workers to hire. This points to the obvious need for employers to start offering higher wages. Why might firms be reluctant to do so?

Standard labor market theory is that markets clear when supply and demand are equal. Labor shortages indicate that prevailing wages are too low to clear the market. Firms cannot offer workers a wage higher than the worker’s marginal revenue product, and a possible explanation of why firms won’t pay enough is that their appraisal of the worker’s value is too impaired by uncertainty of future market conditions—firms are wondering whether inflation will be brought under control, or continue, and if so, for how long; whether the weak recovery will continue, or be derailed by another recession; and whether COVID returns with any severity, and if it does, what restrictions will be implemented?

Recessions normally occur after protracted monetary expansion allows too much investment in less-productive activities. This comes to a head when intricate interrelationships among the economy’s productive activities become so complicated, conflicting, and fragile that too many cannot be completed successfully. Though it was far more severe than any recession since the Great Depression, the COVID-19 recession has done little to remove the economy’s underlying structural problems. This can be seen most clearly in the still booming real estate market. The last several recessions, even going back farther than 2000, have done lasting damage to the US economy, especially labor markets, and so far it appears the COVID-19 recession has been no exception.

This article, COVID-19 and the Labor Market, was originally published by the American Institute for Economic Research and appears here with permission. Please support their efforts.