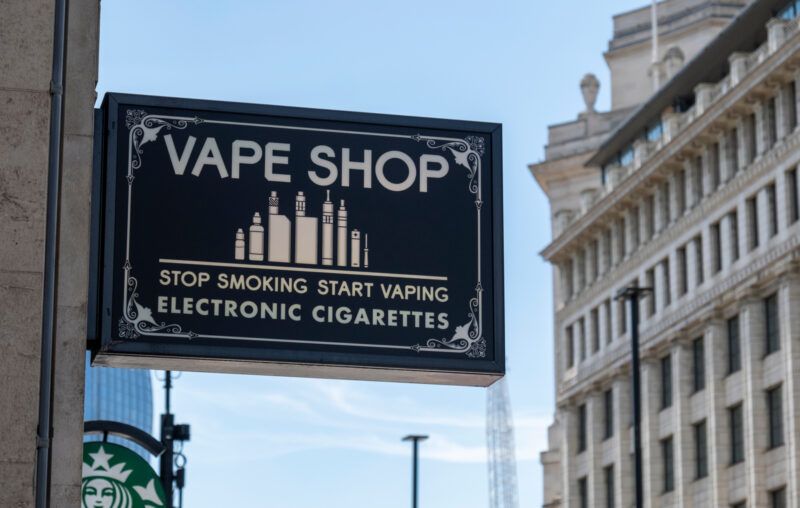 “I’m not an expert. I’m just a smoker who quit smoking after 41 years and started helping other people do the same.”

That is why Marc Slis, owner of 906 Vapor in Houghton, Mich. said he is speaking out on the Food and Drug Administration’s handling — or “mishandling,” in his opinion — of vaping regulations.

He is one of the many small business owners on the front lines of the debate between prohibition and risk mitigation on the issue of vaping, smoking, and tobacco use.

Amanda Wheeler is another. She owns a small, independent vaping business that began as a single 400-square-foot shop selling its homemade vaping fluids. Today, Jvapes E-Liquid has seven stores across Arizona, Colorado, and Oklahoma, as well as a manufacturing facility.

And, like Slis, she is a former smoker who used vaping to overcome her habit.

“My husband and I were both lifelong smokers — we both started in our teens — and over the years we had both tried everything to quit. We were never able to,” Wheeler said. ” I had Hodgkin’s lymphoma when I was nineteen and I had to do about a year of chemotherapy and radiation. I have clear memories of sitting outside waiting for my radiation appointment, smoking cigarettes, and the nurses coming by giving to give me pathetic looks like, ‘what are you doing?’ But I still smoked for ten more years after the cancer treatment.”

“I tell people, ‘Cancer didn’t stop me from smoking, but vaping did,’” Wheeler said.

Slis is scheduled to speak at the E-Cigarette Summit in Washington, D.C. on Tuesday, a gathering of vape business owners, academics, and public health professionals promoting the value of pushing smokers from traditional combustible cigarettes to new, lower-risk “heat not burn” products.

Unfortunately, Wheeler says, the FDA is pushing in a different direction. It has overwhelmingly rejected millions of Premarket Tobacco Product Applications (PMTAs), many from small, independent vaping businesses. Last month the agency issued a marketing denials order for the myblu vaping device, along with some of its tobacco-flavored pods.

Noting that would-be manufacturers have sent the FDA some 6 million PMTAs, — “one for every permutation of devices and e-liquids that manufacturers sought to introduce or keep on the market” — just two device brands have been approved: Vuse Solo and Logic.

“The FDA’s process, with the PMTA’s as a centerpiece — is collectively putting us out of business and sending our customers back to smoking—period. It’s working as a ban to eliminate the independent vaping industry.”

Opponents of the vaping industry like Truth Initiative run ads that make e-cigarettes appear as dangerous to the users’ health as traditional cigarettes, a suggestion that is contrary to the available data.

“There are 480,000 smokers who die every year because of complications from cigarette smoking, from not being able to quit,” says Wheeler.  “And for those people who have been unable to quit by any other means, vaping is an extremely effective alternative that is 95 percent safer than cigarettes.

Advocates for moving smokers to vaping don’t claim there is no health risk, rather the risks are much lower than traditional smoking. And, they note, while anti-tobacco organizations push a goal of zero smoking or vaping, prohibition has been a public health failure since (at least) the 1920s.

Dr. Michael Siegel at Tufts University’s Department of Public Health and Community Medicine is a longtime critic of smoking and the tobacco industry. He says he doesn’t get the logic of the FDA’s decisions.

“It really looks like the FDA is going to close the door on all pod-based e-cigarettes,” Siegel said. “That’s probably 99 percent of the convenience store market.  It also looks like they are only going to allow tobacco ‘flavor.’ This almost completely destroys the point of vaping, since vapers mostly want to get away from the tobacco because it’s a reminder of smoking.”

According to Siegel, “there’s evidence that switching to flavored e-cigs is more effective for smoking cessation.” But the FDA and anti-smoking activist groups like the Campaign for Tobacco-Free Kids are obsessed with preventing teen vaping. The net result is an “abstinence” message that’s almost certain to fail, backed up by regulations to make access to vaping more difficult for the smoker trying to switch.

“I think the FDA and the anti-tobacco groups have completely lost perspective on the problems that are truly plaguing teens today and using a few cherry vapes is not at the top of the list,” Siegal says.

Meanwhile, the process of getting pre-market approval for vaping fluids and other products has become so onerous and expensive that only big corporate players can afford it. The ironic result of the prohibition efforts of public organizations that have spent decades fighting tobacco companies is a regulatory regime only well-funded players like those companies can navigate.

“This is going to be a great victory, once again, for Big Tobacco,” Siegal said.”

Slis tells the story of walking into a new shop that opened in his town selling some product he had never heard of — electronic cigarettes.

“Twenty minutes later, I walked out a non-smoker. A year and a half later, I bought the business. I’ve helped 2,000 people quit smoking in our small community. Why is the FDA trying to stop me?”

This article, FDA Prevents Local Vape Businesses from Helping Smokers Quit, was originally published by the American Institute for Economic Research and appears here with permission. Please support their efforts.