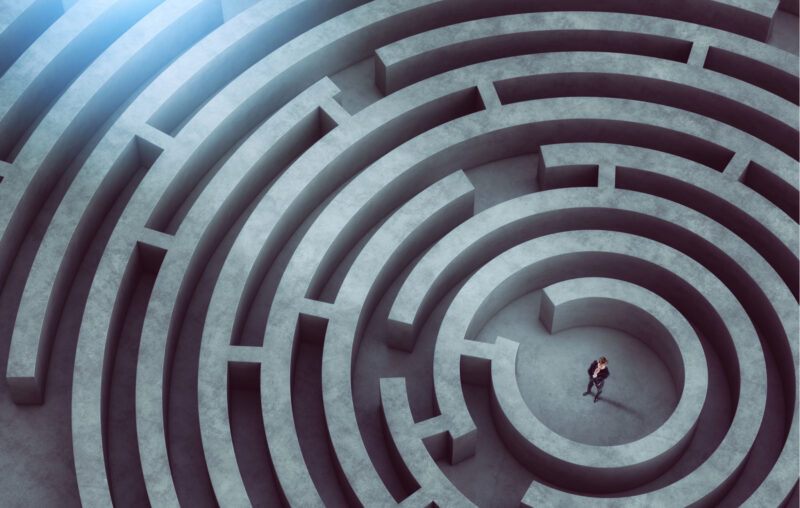 H.L. Mencken once famously said “The whole aim of practical politics is to keep the populace alarmed (and hence clamorous to be led to safety) by an endless series of hobgoblins, most of them imaginary.” I have heard it applied to many different government policies over the years, but I have never heard it applied to zoning. Yet how well it applies is worth considering.

What is the hobgoblin that has long been used to frighten us into acceding to incredibly broad zoning powers? Externalities, which are simply negative effects on others that would supposedly be rampant and lead to chaos in the absence of zoning. As Peyton Knight put it, “Everybody’s afraid that the guy next door is going to sell his home to put up a CVS.” More generally, many echo Dave Cole’s view that “property rights and property values are in danger without zoning.”

Such scare stories have resulted in granting local governments massive arbitrary power following the 1926 Standard State Zoning Enabling Act. “For the purpose of promoting health, safety, morals, or the general welfare of the community,” cities are “empowered to regulate and restrict the height, number of stories, and size of buildings and other structures, the percentage of the lot that may be occupied, the size of yards, courts, and other open spaces, the density of population, and the location and use of buildings, structures, and land for trade, industry, residence, or other purposes.” And that vast reach was limited only by government’s ability to call whatever it favors as creating some improvement in “health, safety, morals, or the general welfare.” In addition, when a government action can be rationalized as “solving” some sort of damage allegedly imposed by one party on another, it legally allows it to avoid paying compensation to property owners they harm.

Do the scare stories really justify the vast power created, which Tim Carter could succinctly summarize as “without zoning approval, you’re toast?” As Ronald Coase, one of the most insightful observers of regulations in history, put it, “I can’t remember [a good regulation]…agriculture is a, zoning is z, they are all bad.” And the process is as questionable as the results, once leading David Mamet to admit that “Any of us who has ever been at a zoning meeting with our property at stake is aware of the urge to cut through all the pernicious billshit and go straight to firearms.”

Both logic and experience reveal that the hobgoblin often resembles the emperor’s new clothes in substance, and suggest that the zoning “solution” is frequently far worse than the disease it supposedly cures.

Neither zoning’s premise that government planners know enough to do it efficiently, nor its promise of providing stability of expectations, enabling better social coordination, has been demonstrated. In fact, the opposite is true.

Friedrich Hayek long ago demonstrated that central planners cannot efficiently do what they set out to do. The process of central planning requires throwing away valuable information known only to particular individuals–details critical to values, but unknown and unknowable to planners–and with it, the wealth creation that such knowledge could make possible. And zoning is a difficult form of central planning, as effective zoning requires massive amounts of detailed and often rapidly changing knowledge about not only what to do, but about “what goes where and why.”

Zoning’s promise of providing stability of expectations by reducing uncertainty that would otherwise exist has also failed to materialize. Arguments about granting exemptions from zoning requirements to enable large or politically favored projects provide good illustrations. If planners knew enough to zone wisely, they shouldn’t have to either rezone properties or grant widespread exemptions from them. But the prevalence of such ex post changes demonstrates how zoning creates more complexity and high-stakes uncertainty, rather than stability.

Since the supposed slam-dunk argument for zoning is to prevent the chaos of widespread “incompatible” land uses which impose massive negative “externalities” on others, we should note that many such externalities do not justify government intervention. Further, marketplace zoning, as with shopping malls, is often more effective than government zoning, because profit potential provides better incentives than nonprofit planning, and private sector bankruptcy provides a mechanism for eliminating mistakes, while no such mechanism exists to undo zoning mistakes.

Imagine that two parties intended to use properties in ways that would negatively affect each other. They would not locate nearby if such two-way negative externalities existed. In such cases, no one needs to overrule the choices individuals would make for themselves.

On the flip side, self-interest would also lead to uses locating near one another when there are two-way positive externalities, without anyone making them do so. Again, zoning is unnecessary.

Many externality horror stories also ignore the way markets effectively zone problems away. We don’t need zoning to keep a glue factory out of ritzy areas because land prices are too high to make such a project profitable. What no one would do, no one needs to fear.

Similarly, I needn’t fear a gas station’s locating on my cul-de-sac, because it would need a large volume of traffic to be profitable. The transportation grid makes it unprofitable. Firms in the same industry (e.g., Hollywood) also often locate together to benefit from agglomeration economies, which means whatever negative externalities are involved are largely borne by those who receive even greater positive externalities, leaving them better off.

Even in the absence of zoning, government retains massive leverage over locational selections. It controls the transportation network and other infrastructure, such as water, sewer and power connections (in fact, it is their mismanagement of infrastructure, such as mispricing new sewer connections, that actually causes many alleged local market failures). It can also impose setbacks and other restrictions, applied generally, without zoning.

Enforcing private property rights and non-government alternatives can also do zoning’s job more efficiently. Nuisance law can handle physical invasions of property (noise, smells, dust, vibration, etc.) without requiring zoning. Similarly, performance standards for mitigating impacts on neighbors (e.g., adding road capacity or turn lanes to mitigate congestion) can be far less costly than requiring separation of different land uses. Privately developed communities, as well as restrictive covenants, have proved capable of effectively internalizing externalities and providing more stable expectations by preventing arbitrary changes after the fact, unlike zoning rules. Such voluntary private arrangements also provide a superior mechanism for changing land uses when appropriate, without allowing some owners to harm their neighbors (e.g., while I cannot sell for an alternative use that harms my neighbors, we can agree to jointly sell to higher valued land uses).

Houston, which does not have zoning, provides additional proof that private arrangements don’t generate chaos in the absence of government dictation. Its pattern of land use is very similar to other cities, because the economic incentives make it profitable, and it offers more affordable housing.

In addition to offering little of necessary value, zoning has often been a source of abuse, ranging from San Francisco’s ill-treatment of Chinese people and laundries to segregation of blacks to massive wealth redistribution from the politically unfavored to the politically favored.

Neither the premise nor promise of zoning is demonstrated. It gives government massive power, which has been used arbitrarily. Self-interest, self-selection and differing transportation and infrastructure needs resolve many scare stories when property rights are defended. And private communities and voluntary agreements have proven capable of dealing with the problems, without the abuses and political brawling for control. Americans should reconsider such alternatives, because zoning imposes very large costs, but slays few of the dangerous hobgoblins used to justify it.

This article, Fear of Hobgoblins Doesn’t Justify Zoning, was originally published by the American Institute for Economic Research and appears here with permission. Please support their efforts.