Fears of Price Instability Pull Down Consumer Sentiment in Early May 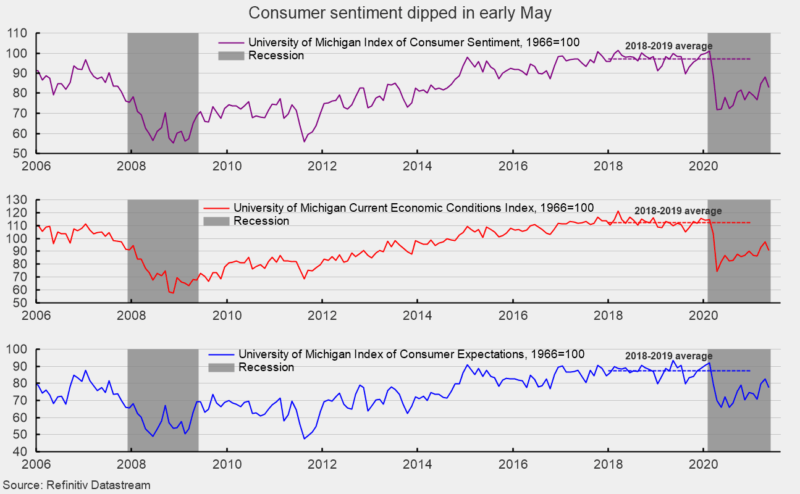 The preliminary results from the University of Michigan Surveys of Consumers show overall consumer sentiment fell in early May and remains well below pre-lockdown levels. Fears over rising prices were the primary cause.

Overall consumer sentiment decreased to 82.8 in early May, down from 88.3 in April, a 6.2 percent decline (see top chart). From a year ago, the index is up 14.5 percent. The sub-indexes both fell in early May. The current-economic-conditions index dropped to 90.8 from 97.2 in April (see second chart). That is a 6.6 percent decline but leaves the index with a 10.3 percent increase from May 2020. The second sub-index — that of consumer expectations, one of the AIER leading indicators — sank 5.1 points or 6.2 percent for the month to 77.6 (see third chart) but is 17.8 percent above the prior year. All three indexes remain well below the pre-pandemic levels.

According to the report, “Consumer confidence in early May tumbled due to higher inflation–the highest expected year-ahead inflation rate as well as the highest long term inflation rate in the past decade.” The report goes on to add, “Rising inflation also meant that real income expectations were the weakest in five years.” The report concludes, “It should be no surprise that consumers anticipate a booming economy over the next year or so, including rapid job gains as well as increases in the inflation rate and interest rates. Indeed, consumers think these economic prospects are the natural result of stimulating an economic boom from last year’s shutdown.”

A resurgence in consumer demand as the economy reopens coming at the same time as a confluence of events including a semiconductor chip shortage, gasoline pipeline ransom hack, logistical and labor issues, and dramatic shift in consumer spending habits, are combining to push up prices. The pressures may continue for a time but are likely to fade as market forces redirect productive capacity. Given the vastly different structure of the economy today, a 1970s-style inflationary spiral remains unlikely.

This article, Fears of Price Instability Pull Down Consumer Sentiment in Early May, was originally published by the American Institute for Economic Research and appears here with permission. Please support their efforts.

Earnings Outlook: Alibaba stock has taken a hit from China crackdown, but its earnings could be a different story