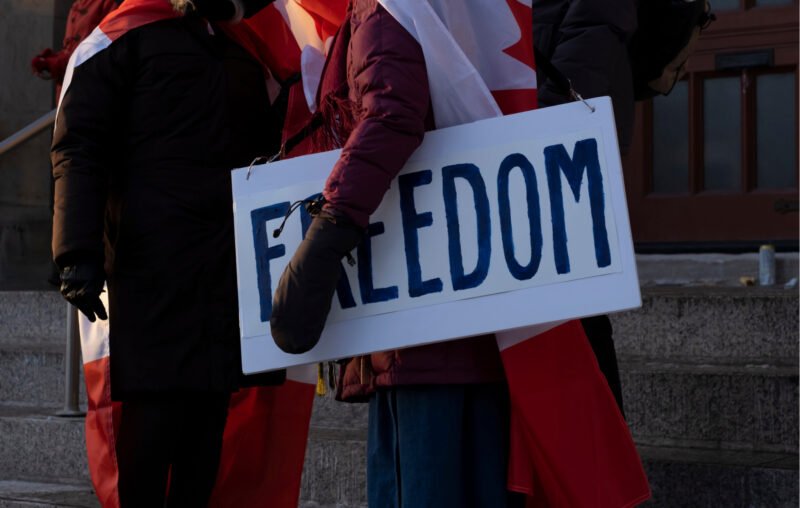 For the first time in Canadian history, the Emergencies Act was invoked on February 14, 2022. In an unprecedented maneuver, Canada’s federal government granted itself with nearly limitless powers to quash peaceful protests and sociopolitical dissent by freezing the bank accounts and seizing the assets of people who don’t agree with its political modus operandi.

The aim is to end the civil rights movement led by the Canadian truckers’ Freedom Convoy. The movement began as a response to a federal vaccine mandate on the Canadian trucking industry which took effect on January 15, 2022. Since then, it has grown into an international movement for human rights and liberties, with freedom convoys converging at Parliament House in Canberra, Australia, and in Brussels, Belgium – the seat of the European Union.

As stated by Chrystia Freeland, Canada’s deputy Prime Minister and Minister of Finance: “As of today, a bank or other financial service provider will be able to immediately freeze or suspend an account without a court order. In doing so, they will be protected against civil liability for actions taken in good faith.” A terrible precedent against civil rights and liberties in Canada has been set. A government’s taking unlimited power over the bank accounts and financial security of its citizens is a surefire way to silence opposition.

Despite every effort to discredit the truckers’ movement, the Freedom Convoy has seen the support of countless millions around the world. After raising over $10 million from well over 100,000 donations to help pay for the truckers’ expenses during the protests, GoFundMe seized the funds.

Immediately thereafter, nearly $10 million was raised on the Boston, Massachusetts based platform GiveSendGo. On February 13, the day before prime minister Justin Trudeau invoked the Emergencies Act, GiveSendGo’s website was hacked and the names of the 92,000 people who contributed to the Freedom Convoy were leaked.

Although Canada has no jurisdiction on how the funds are collected and distributed by a US-based crowdfunding platform, the Canadian government can now seize the personal and corporate bank accounts of anybody who participated in, or supported the Freedom Convoy.

After being distributed to help pay for the truckers’ fuel, lodging, and food, the remaining funds from the fundraisers were planned for Veterans’ associations across Canada. Money which was intended to help Canadian tradesmen and blue-collar workers advocate for the rights of more than 3.7 million unvaccinated Canadians was taken away from them for the interests of a government losing its grip on power.

A Maru public opinion poll found that only 16 percent of Canadians are in favor of Trudeau’s actions. While the government is condemning Freedom Convoy donations from foreign entities and influence, information about the Trudeau Foundation is resurfacing with evidence of massive contributions from Chinese businessmen linked to Beijing and to the Chinese Communist Party.

Prior to February 14, 2022, the War Measures Act had been invoked during the two world wars, much to the horror of Ukrainians and Japanese Canadians wrongfully interned in Canada during those eras. Former prime minister Pierre Elliott Trudeau (the late father of the current prime minister) invoked the War Measures Act during the 1970 October Crisis, during which Quebec separatists kidnapped British diplomat James Cross, and Quebec cabinet minister Pierre Laporte, who was murdered by his kidnappers.

In its current iteration, it is the first time in Canadian history that the Emergencies Act has been invoked to stop people from peacefully protesting; from playing music and dancing in the streets by night in quasi-Arctic conditions; from speaking their minds; from enjoying their portable saunas in the freezing cold of winter; and from building inflatable bouncy castles in the shape of the Minions in which their children can play during the day while their parents defend their futures.

What transpired on February 14, 2022 is one of the most massive assaults on civil rights and liberties in Canada. The Canadian Civil Liberties Association has condemned this excessive use of force by stating:

The federal government has not met the threshold necessary to invoke the Emergencies Act. This law creates a high and clear standard for good reason: the Act allows government to bypass ordinary democratic processes. This standard has not been met. The Emergencies Act can only be invoked when a situation ‘seriously threatens the ability of the Government of Canada to preserve the sovereignty, security and territorial integrity of Canada’ and when the situation ‘cannot be effectively dealt with under any other law of Canada.’ Governments regularly deal with difficult situations and do so using powers granted to them by democratically elected representatives. Emergency legislation should not be normalized. It threatens our democracy and our civil liberties.

The tragedy of this situation is that the Emergencies Act is being invoked to stop law-abiding Canadian truckers from advocating for the rights of more than 3.7 million unvaccinated Canadians.

As it stands, the Canadian truckers and their movement are a much-needed counterpoint to the fear, hysteria, and hatred that has gripped the world for the past two years. They are the much-needed answer to indefinite government control and overreach. They are a reminder in the face of every authoritarian that the Canadian spirit of courage and adventure can never be contained. The Canadian truckers are reminding the world that liberty is as essential to the True North, Glorious and Free, as the silent winters from which Canada emerges stronger, better, and more beautiful every Spring.

This article, February 14, 2022: A Dark Day for Civil Rights in Canada, was originally published by the American Institute for Economic Research and appears here with permission. Please support their efforts.