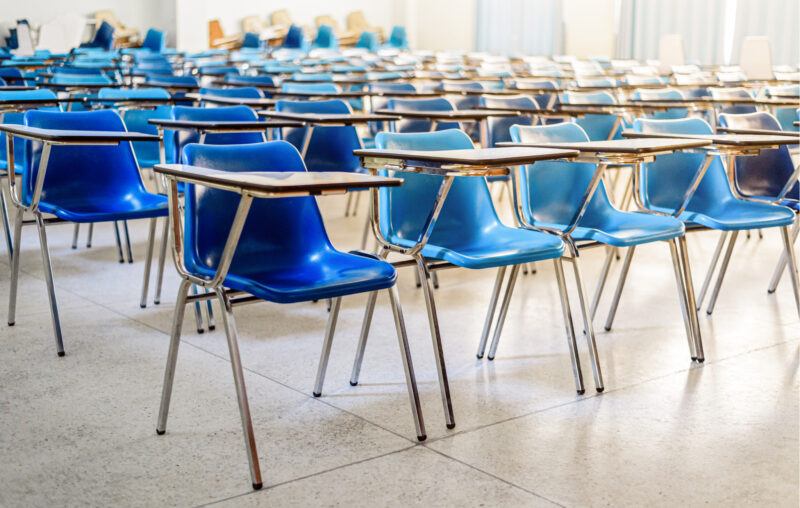 School closures have been one of the most contentious policies of the pandemic for good reason. They are not only unscientific, with even Dr. Fauci and President Biden at many points advocating against closing schools, but they are also directly harmful to the least vulnerable sections of society, young people. A variety of literature clearly shows lockdown policies in general, but particularly school closure, have disproportionately harmed the younger segments of the population both mentally and physically. This is what makes California’s policy to close not just public schools, but mandate the closure of private schools so heinous.

On July 23, 2021, almost a year after the lawsuit started, the 9th Circuit Court of Appeals ruled in favor of California parents against the state in a case known as Brach V Newsom. The Court found that closing private schools violated an important set of case law and due process rights, although the Court did not recognize the same right for public schools.

“In a suit brought forward in July 2020 by the Center for American Liberty, 20 plaintiffs challenged an order by Newsom that barred in-person teaching in 32 counties – a mandate that affected 80% of California’s children.”

The lawsuit was organized by an organization known as the Center For American Liberty, a public interest law firm specializing in protecting civil liberties. They assert,

“(T)he Governor’s order flies in the face of science, data, and the knowledge learned from the failed online education experiment of the 2020 spring semester in California’s schools, in which large portions of the children were unable to log on and access online learning — or if they could, experienced at best ineffective and at worst, nonexistent instruction.”

The Court of Appeals ruled in favor of the plaintiffs 2-1 but did not extend the ruling to public school closures. According to the majority opinion,

“California’s forced closure of their private schools implicates a right that has long been considered fundamental under the applicable caselaw—the right of parents to control their children’s education and to choose their children’s educational forum. Because California’s ban on in-person schooling abridges a fundamental liberty of these five Plaintiffs that is protected by the Due Process Clause, that prohibition can be upheld only if it withstands strict scrutiny.”

The case law they reference that extends due process protections to educational discretion are Meyer v. Nebraska (1923) and Pierce v. Society of Sisters (1925), which together form the Meyer-Pierce right, which is the right of parents to decide their children’s education. Meyer was a case involving a teacher who violated a law mandating that only English be taught in schools by teaching German. Pierce involved a set of plaintiffs who contested Oregon’s Compulsory Education Act of 1922 which mandated attendance to public school for children of certain ages.

The Meyer-Pierce right would go on to be affirmed in case after case. In particular, its explicit protection of in-person-schooling has been affirmed by case law as well. The State of California contended in its defense that Meyer-Pierce only protected the right to choose between a public and private school, not the actual form of education itself. The court rejected this argument as a far too narrow reading of the right.

As a result, this extends due process protections to private schools. That means the state could potentially close private schools; however, its policies must be narrowly tailored and not overly arbitrary. The narrowly tailored standard has been invoked by a number of judges to rule in favor of some anti-lockdown cases, although they are far and few between. In particular, an LA County judge applied the same standard to an outdoor dining ban, in which he rightfully noted that the scientific evidence as well as the state’s actions do not support such a policy.

The Court opinion also referenced an earlier Supreme Court case known as Diocese of Brooklyn v Cuomo, which challenged New York’s arbitrary attendance restrictions on churches during the pandemic. In this case, the Supreme Court found that the state lacked the evidence to justify a 10 or 25 person attendance restriction while applying looser standards to other establishments.

The 9th Circuit Court tied this into its opinion by writing

“By prohibiting in-person instruction at the relevant Plaintiffs’ schools, California effectively imposed an attendance cap of zero, which is much more restrictive than the numerical caps struck down by the Supreme Court for religious services in Diocese of Brooklyn. That alone confirms that California’s prohibition on in-person instruction is not sufficiently tailored.”

They also note that California’s policies were more severe and lengthy than any other jurisdiction, which further lends credence to the argument that its school closures were not narrowly tailored. A pandemic does not give governors the right to conduct harsh social experiments on their citizens, especially with little evidence to support it. The Court’s opinion offers a scathing rebuke of the state’s actions when they write,

Although the state certainly has the power to enact public health measures, it must also realize that it is a servant of the people, not the other way around. The state must humbly and expediently cater to its citizens as well as the constraints placed on it by the Constitution; it does not get to force people to follow its edicts at will.

It is also worth noting that dissenting opinion on this case wrote the following in response,

“We must be particularly deferential in the context of the COVID-19 pandemic, as we “are not public health experts and … should respect the judgment of those with special expertise” in this area.”

This presents two notable dichotomies when it comes to lockdown litigation, those who defer to the state and its “experts” as well as those that are willing to be critical. It is an unfortunate development as even those on the Supreme Court, such as Justice Sonia Sotomayor, are deferential to the tired “listen to the experts” cliche. It is clear that the experts do not all agree with each other and it seems that judges seem to be deferring to the state’s experts, which tend to also favor the state’s political mandate. However, it is also clear that plaintiffs can convince some judges to side against lockdowns by presenting experts of their own, which is certainly a sign of hope.

This also illustrates another interesting duality that has arisen during the pandemic, which is an unquestioning deference to an abstractly defined public health establishment and those that believe that a “scientific consensus” does not trump reasonable thinking.

The Court’s ruling was a long-overdue check on the egos of California’s leaders who, through the entire pandemic, treated its citizens like lab rats. Its lockdown policies have been the most severe and the most arbitrary, paying little attention to evidence or the law. Its closure of both private and public schools violated long-established precedent regarding the rights of parents to control their children’s education while eschewing science or reason. This ruling was an all too rare affirmation of the seemingly forgotten fact that there is no pandemic clause in the Constitution that places the egos of politicians over the rights of individual citizens.

This article, Federal Court Rules Against Closing Private Schools, was originally published by the American Institute for Economic Research and appears here with permission. Please support their efforts.