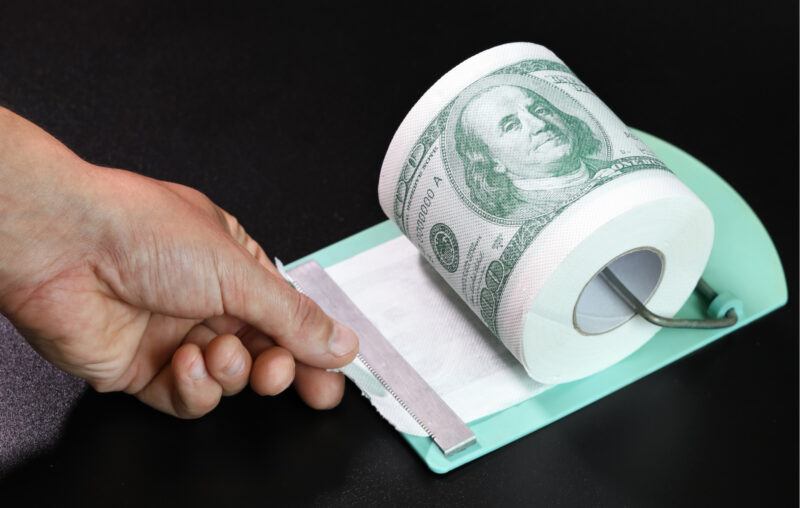 A recent radical experiment in fiscal policy might prove the exception to the rule. Various rounds of Covid-19 stimulus contained extensive direct transfers to households. Since the beginning of the pandemic, “the IRS has successfully delivered more than $1.5 trillion to people across the nation through Economic Impact Payments, tax refunds and advance Child Tax Credit payments.” Perhaps stimulus checks work differently than other forms of federal spending.

John Cochrane is the leading economist raising the alarm on “fiscal inflation.” Not coincidentally, Cochrane is the chief theorist and most outspoken advocate of the fiscal theory of the price level (FTPL). According to the FTPL, goods and services across the economy get more expensive when the present value of government budget surpluses fall. If Uncle Sam doesn’t credibly commit to raising taxes tomorrow to pay for spending splurges today, the most likely outcome is debt monetization: the Federal Reserve steps in to pick up the tab. Anticipated money printing causes the price level to rise, and hence the dollar’s purchasing power to fall.

Economists sometimes refer to “helicopter drops,” where the central bank distributes money directly to households rather than going through the financial system via open market operations or influencing the demand for bank reserves. As Milton Friedman explained in 1969 when the thought experiment was first introduced, households respond to the additional cash by spending more money on goods, services, and financial assets. The additional spending stops once households again reach their desired level of money balances—that is, when that new liquidity is no longer burning a hole in their pockets.

Cochrane maintains that Covid stimulus checks look a lot like a “helicopter drop.” The Fed did not distribute new money to households, as in Friedman’s thought experiment. Instead, the Treasury issued new debt in the amount totaling the emergency checks; the Fed purchased the debt with new money; and the Treasury used the new money to send checks. (Of course, the Fed doesn’t purchase directly from the Treasury. But since the Fed committed to gobbling up government bonds on the secondary market, it wasn’t hard for Uncle Sam to place those bonds in the first place.) It is more circuitous than the traditional helicopter drop story, but amounts to more or less the same thing.

Cochrane’s argument is intriguing. But does it prove too much? First, note that FTPL doesn’t distinguish between how government money is spent. If Washington borrows and spends trillions more, and the public doesn’t expect this to be paid back with future taxes, the price level should rise. What matters is the permanent increase in deficits, not the content of new spending.

Second, FTPL seems to rely on a specific psychological mechanism. Cochrane seems to say as much:

Dropping debt from helicopters is a brilliant psychological device for convincing people that the government debt raining down on them will not be repaid by future taxes or spending restraint. It will be left outstanding, so they had better spend it now.

How should we interpret this? Are helicopter drops a credible commitment to not paying back the debt? Does the public not understand the government’s consolidated balance sheet? The mechanisms that make FTPL work––meaning the concrete economic behaviors driving the result––are unclear.

When it comes to fiscal policy, we’re off the edge of the map. The typical stories told by unreconstructed Keynesians are clearly wrong. But that doesn’t mean we never need to worry about fiscal inflation. While I’m not completely convinced, Cochrane raises some important points that must be a part of the ongoing policy discussion. I’m well known for harping on the importance of monetary rules. Maybe fiscal rules are required as well. A thief with only one hand bound is still plenty dangerous.

This article, Fiscal Policy and Inflation, was originally published by the American Institute for Economic Research and appears here with permission. Please support their efforts.