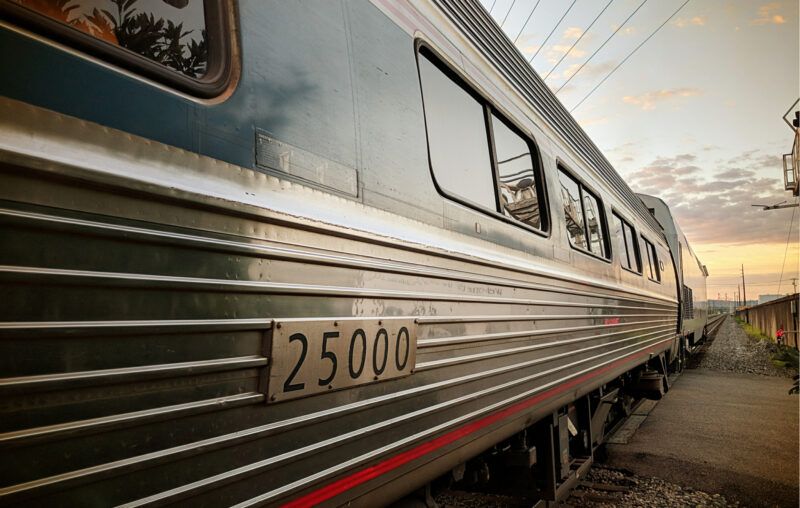 Of the $106 billion Congress gave to the Department of Transportation in three Covid relief bills in 2020 and 2021, $69 billion, or 65 percent, went to transit. Yet transit carried less than 1 percent of passenger travel before the pandemic and is carrying less than half a percent during the pandemic.

Another 4.4 percent went to Amtrak, which carried just 0.1 percent of passenger travel before the pandemic and less during. Meanwhile, the nation’s freight network, which has had the most serious transportation problems during the pandemic, received not a single dollar.

Historian Stephen Davies observes that a major pandemic does not “introduce something novel.” Instead, “it accelerates and magnifies trends and processes that were already under way.” One of the processes magnified by the Coronavirus pandemic is Congressional favoritism towards functionally obsolete forms of transport, namely urban transit and intercity passenger trains.

Transit and Amtrak are functionally obsolete because they are inferior to their competitors in almost every possible way. According to the University of Minnesota Accessibility Observatory, transit is so much slower than driving that the average resident of one of America’s 50 largest urban areas can reach 31 times as many jobs in a 30-minute auto drive as a 30-minute transit ride, and twice as many jobs in a 20-minute drive as a 60-minute transit ride. Transit is so slow that bicycle riders can reach more jobs than transit riders in trips of 50 minutes or less.

Similarly, buses are faster, more frequent, and charge lower fares than passenger trains in many Amtrak corridors despite the fact that almost half of Amtrak’s costs are subsidized. Advocates of high-speed trains ignore the reality that the fastest scheduled intercity trains in the world go less than half the speed of airliners and that the Boeing 707 had rendered high-speed rail obsolete six years before Japan introduced its first bullet trains.

Transit and Amtrak survive as we know them today solely because of the gigantic subsidies that Congress and state and local governments have pumped into them. Since the federal government began supporting transit in the late 1960s, taxpayers have spent well over $1.5 trillion (in today’s dollars) subsidizing transit. Federal and state taxpayers have also spent close to $100 billion subsidizing Amtrak since it began in 1971, and the recent infrastructure bill will add more than $60 billion.

Subsidies per passenger mile to transit and Amtrak are not only greater than those to highways and airlines, they are growing faster thanks to incessant lobbying by a transit-industrial complex that includes transit agencies, unions, contractors, and a variety of non-profit advocacy groups. The American Public Transportation Association has an annual budget that is much larger than all the highway lobby groups combined, and its work is bolstered by state transit lobby groups in at least half the states.

Transportation contractors love transit because it is so much more profitable than building roads. Road construction is entirely routine and typically costs about $2 million to $3 million per lane mile. By comparison, every single foot of new light-rail or other transit lines must be carefully designed and engineered, and the average cost of light-rail lines now being planned or under construction is well over $200 million per mile. The oft-heard claim that a single rail line can move more people than an eight-lane freeway is completely bogus: other than New York City subways, no rail line in the country comes close to moving as many people per day as a single typical urban freeway lane.

Most galling is the fact that virtually every dollar spent lobbying Congress, state legislatures, or local voters for more transit and Amtrak tax subsidies comes from taxpayers themselves. Transit and Amtrak fares are not sufficient to pay for basic operations, much less have any left over for lobbying.

Lobbying by these groups is so effective that government funding for transit and Amtrak has become completely detached from any useful results. Per capita transit and passenger train usage has been declining despite growing subsidies, yet the subsidies continue.

The transit-industrial complex claims that transit and Amtrak are effective ways of saving energy, reducing greenhouse gas emissions, helping low-income people, and relieving traffic congestion. Hardly anyone in power questions these claims, yet none of them are true.

Fifty years ago, the average American car was a gas guzzler, and transit really did save energy. Since then, the energy efficiency of the average auto has improved by 50 percent while that of transit has declined. In 2019, transit used more energy per passenger-mile than the average car in all but three major urban areas. Transit buses emitted far more greenhouse gases per passenger mile than the average SUV. Electric-powered transit also produces more greenhouse gases per passenger mile than autos in regions where most electricity is generated by burning fossil fuels. In other regions, it is more cost-effective to reduce greenhouse emissions by encouraging people to buy electric cars than to ride transit.

Amtrak has followed a similar pattern. Fifty years ago, intercity passenger trains used only about a third as much energy per passenger mile than the airlines. But since then planes have become far more energy efficient so that they are about tied today.

A few decades ago, most transit riders were low-income people. But transit agencies have spent so much money building expensive rail lines to attract high-income riders that the median income of transit commuters in 2019 was higher than that of any other commuters.

Transit actually hurts low-income people more than it helps them because only 5 percent of people earning less than $25,000 a year rode transit to work in 2019, compared with 7 percent of people earning more than $75,000 a year. Most taxes supporting transit are regressive, so 95 percent of low-income workers are disproportionately paying to subsidize transit rides that are disproportionately taken by high-income workers. A socially just transportation policy would help low-income families gain access to the same transportation that high-income people have enjoyed for a century.

Claims that transit reduces congestion have successfully persuaded voters to support increased transit subsidies in cities all over the country. As the tongue-in-cheek Onion once reported, 98 percent of American commuters want transit for others so that they can drive on uncongested roads.

Transit truly prevents more congestion in New York City. It also helps in a few big-city downtowns that have lots of jobs, notably Boston, Chicago, Philadelphia, San Francisco, Seattle, and Washington, DC. Everywhere else, however, transit does nothing about congestion because it is insignificant and declining in importance every year.

As Davies might have predicted, the pandemic accelerated these declines, with transit passenger miles in 2020 falling by 57 percent from 2019 and Amtrak passenger miles falling 66 percent. By comparison, driving fell by just 13 percent and almost completely recovered in 2021.

Other trends accelerated by the pandemic, including telecommuting, the movement of people from big urban areas to small towns and exurban areas, and the movement of jobs from downtowns to suburban areas, all work against transit, which depends on people living in dense suburbs commuting to even denser downtowns. Transit is unlikely to ever recover more than 75 percent of its 2019 ridership.

Amtrak ridership is also likely to be depressed by these trends long after the pandemic is over. Half of all of Amtrak’s prepandemic ridership was generated by just seven urban areas—New York, Washington, DC, Philadelphia, Boston, Chicago, San Francisco, and Los Angeles—and many of these are losing population.

When the pandemic hit, dropping transit ridership by 81 percent and Amtrak ridership by 93 percent in April 2020, the transit-industrial complex cranked up its media machine to demand more subsidies than ever. Transit might not be carrying many people, said the machine, but the people it was carrying were “essential workers.” Transit is “helping prevent the collapse of civilization,” transit consultant Jarrett Walker hyperbolically proclaimed.

In fact, few workers of any kind were riding transit before the pandemic, and fewer still during it. As noted above, only 5 percent of workers earning under $25,000 a year rode transit to work in 2019, and less than 5 percent earning $25,000 to $75,000 relied on transit. Census data for 2020 aren’t broken down by income, but the share of all workers who relied on transit for commuting fell from 5.0 percent in 2019 to 3.2 percent in 2020. If there are any essential workers who absolutely need transit, it would be less expensive to give them taxi or ride-sharing rides than to keep subsidizing transit.

Moreover, research available at the time showed that people who rode transit were six times more likely to get respiratory infections. In May 2020, the Centers for Disease Control advised workers “to use forms of transportation that minimize close contact with others.” Transit agencies protested that their riders were safe from infection, but a study by Johns Hopkins University epidemiologists found that transit “remained significantly associated with SARS-CoV-2 infection.” If we truly cared about those essential workers, we would have encouraged them to drive to work, not ride transit.

Unfortunately, the 2021 infrastructure bill compounded the errors of the Covid relief bills, giving nearly half of surface transportation funds to transit and Amtrak. Much of those funds will be wasted on new transit infrastructure and expanding Amtrak services to communities that already have plenty of bus and/or air service.

The main premise of the infrastructure bill, that the nation suffered from crumbling highways and bridges, was flawed in the first place. Department of Transportation data showed that highway conditions were improving and the number of bridges considered to be in poor condition was declining every year. The false tale of crumbling infrastructure was merely an excuse to spend more money on obsolete transportation technologies.

Subsidies to Amtrak and transit make no more sense than subsidies to manual typewriters, rotary telephones, or steam locomotives. Planners who design transportation systems based on how they wish people would travel end up with more congestion, wasted energy, and socially unjust taxes. Those who design transportation systems based on how people actually do travel can make those systems safe, environmentally sensitive, resilient, and efficient.

This article, Funding Obsolete Transportation, was originally published by the American Institute for Economic Research and appears here with permission. Please support their efforts.