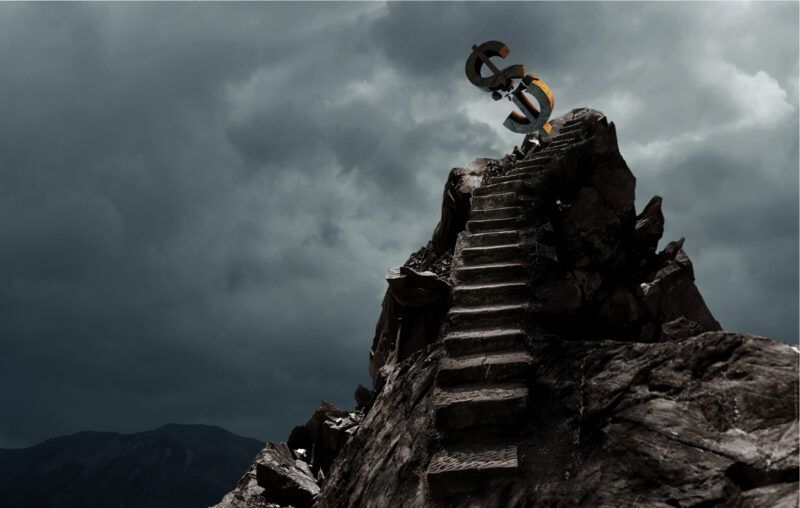 The last couple of years have witnessed extraordinary spending by the federal government. It has been quite the party. Figure 1 shows government spending since 2000.

The increase to 30 percent of Gross Domestic Product (GDP) in 2020 stands out. Government revenue, also shown in Figure 1, does not jump. Federal government revenue in 2020 and 2021 is not particularly higher or lower than earlier years. The increase in spending was financed by dramatic increases in debt. Public debt issued by the federal government increased from 107.4 percent of GDP at the end of fiscal year 2019 to 127.6 percent two years later. As Figure 2 shows, the increase and the level are quite extraordinary.

Interest rates have been relatively low recently, which makes this level of debt not as onerous as it could be. In fiscal year 2021, the average interest rate on public debt was 1.8 percent per year. The low level of interest rates in the economy has made it possible for the federal government to borrow at historically low rates and to have relatively modest interest payments.

There is every reason to expect these low rates to disappear in the next year or two. In 1981, after the Great Inflation, the federal government paid an average interest rate over 13 percent in 1981 and 1982.

Inflation in the United States today is running over 7 percent per year; the low level of current rates will not persist. Whether the level of rates gets to 13 percent depends in part on the Federal Reserve. The Federal Reserve increased short-term interest rates at its meeting on March 15. Given the level of inflation of over 7 percent per year, there is little doubt that the Fed’s target interest rate and the interest rates paid by the Treasury will be rising quite a bit over the next year or even two if inflation is to be subdued.

The Federal Reserve is currently committed to a slow increase in interest rates. A slow pace carries its own risks for controlling inflation. It does imply, though, that these extraordinary levels of interest payments compared to federal government revenue will not be reached in the near term. Just later rather than sooner.

Sooner or later, absent substantially lowering government spending or raising taxes, interest payments will overwhelm the government’s budget. The situation might even be termed a sovereign debt crisis because all the spending, revenue, deficit and inflation choices are unpalatable.

One plausible resolution of the dilemma is to increase inflation even more than people expect. This would inflate away the extraordinary debt issued in the last couple of years. In a way, it resolves the dilemma, just not in a very desirable way from the viewpoint of holders of depreciating US dollars.

This article, Government Debt and Inflation: Reality Intrudes, was originally published by the American Institute for Economic Research and appears here with permission. Please support their efforts.