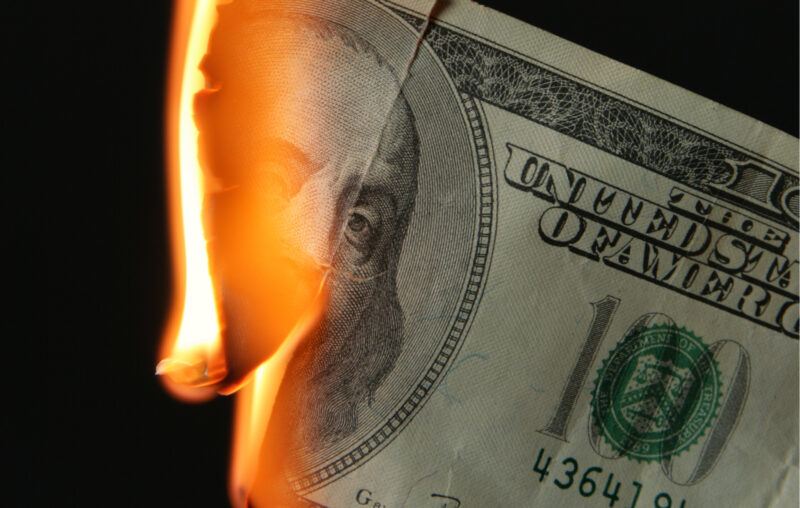 Inflation in the United States was over 7 percent in 2021. This is dramatically higher than just a couple of years ago when it was less than 2 percent per year.

Why did it go up? The most obvious answer – and the one consistent with an extraordinarily large amount of evidence – is the dramatic increase in the quantity of money in the economy. Effectively, this increase is similar to Milton Friedman’s hypothetical helicopter drop, in which money rains down from the skies, people pick it up and they spend it over time. The federal government’s stimulus payments, financed by increased government debt purchased by the Fed, were deposited directly into people’s accounts, eliminating the effort of picking up the money.

Not surprisingly, this extraordinary policy has been followed by an observed substantial increase in inflation. Given the size of the stimulus payments and the delay in spending the newfound money, there is no reason to expect inflation to slow down in the immediate future.

The Biden administration is taking credit for the stimulus payments. They should also accept blame for inflation.

The discussion of meat prices by the administration, especially beef, and meatpackers is particularly egregious. Meatpackers were “essential workers” during the lockdown. They work close together in enclosed spaces. Many of them got Coronavirus during the lockdowns, slaughterhouses were closed, and some people died.

It seems more than a little plausible that fewer people would want to work in meatpacking than before Covid. The all but inevitable result of this decrease in the supply of labor is an increase in wages. What has happened to the starting wage in slaughterhouses? It has increased from $14 to $22.50, an increase that is reflected in higher prices paid by consumers and a smaller quantity of beef slaughtered. The prices received by ranchers for beef can be expected to decrease: people are consuming less beef and the cows were in the pipeline. Under these circumstances, it’s hardly surprising that meatpackers have a temporarily higher margin on the beef they are processing.

Focusing on the extraneous and completely ignoring monetary and fiscal policy was foreshadowed by a document published on the White House’s website last July. “Historical Parallels to Today’s Inflationary Episode” creates a clear impression that monetary and fiscal policy have little if anything to do with inflation. The three inflationary episodes in the last 50 years – since 1973 – are due to increases in oil prices. The earlier episode from 1969 to 1971 was due to a “booming economy” but was brought under control by price controls. The other two episodes after the Korean War and World War II were due to the elimination of price controls, supply “shortages” and “pent-up demand.” One looks in vain for terms such as money or monetary policy, even though Milton Friedman and Anna J. Schwartz’s work is mentioned incidentally. The closest mention of monetary and fiscal policy is a passing reference to Federal Reserve Chairman Paul Volcker raising interest rates to lower inflation in the early 1980s.

Only a monetary policy geared to reduce inflation will be effective in reducing inflation. This is as true now as when the Federal Reserve lowered inflation in the early 1980s.

This article, Greedy Corporations and Inflation, was originally published by the American Institute for Economic Research and appears here with permission. Please support their efforts.