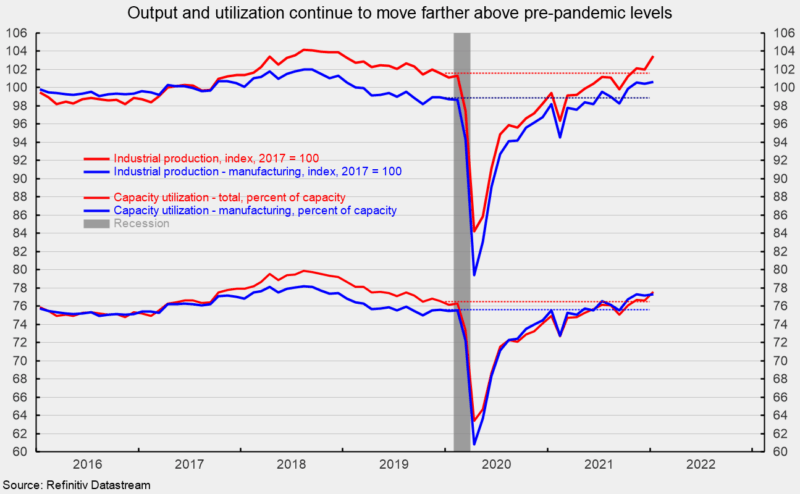 Among the key segments of industrial output, energy production (about 27 percent of total output) rose 4.8 percent for the month (see bottom of second chart) with significant gains across all five components. The weather-related surge in utility output also influenced the energy-sector results in January. Total energy production is up 9.8 percent from a year ago and is back slightly above the December 2019 level (see third chart).

The selected high-tech industries index was unchanged in January (see bottom of second chart), is up 5.3 percent versus a year ago, and about 15 percent above December 2019 (see third chart). High-tech industries account for just 1.9 percent of total industrial output.

All other industries combined (total excluding energy, high-tech, and motor vehicles; about 67 percent of total industrial output) rose 0.2 percent in January (see bottom of second chart). This important category is 2.7 percent above January 2021 and 1.8 percent above December 2019 (see third chart).

Industrial output jumped in January mostly due to a weather-related surge in utility output. Other areas generally posted a modest gain for the month. Ninety-five percent of the industrial sector is now producing at or above the December 2019 level, prior to the pandemic. While ongoing difficulties with labor, logistics, and materials shortages continue to be challenges for many industries especially in manufacturing, some of these issues may have been starting to ease prior to the Omicron wave. With the latest wave of new Covid cases receding in many areas, producers will be able to refocus on boosting output and easing logistical bottlenecks. However, the overall labor shortage may prolong the process.

This article, Harsh Weather Drives a Surge in Utility Output While Manufacturing Posts a Modest Gain, was originally published by the American Institute for Economic Research and appears here with permission. Please support their efforts.