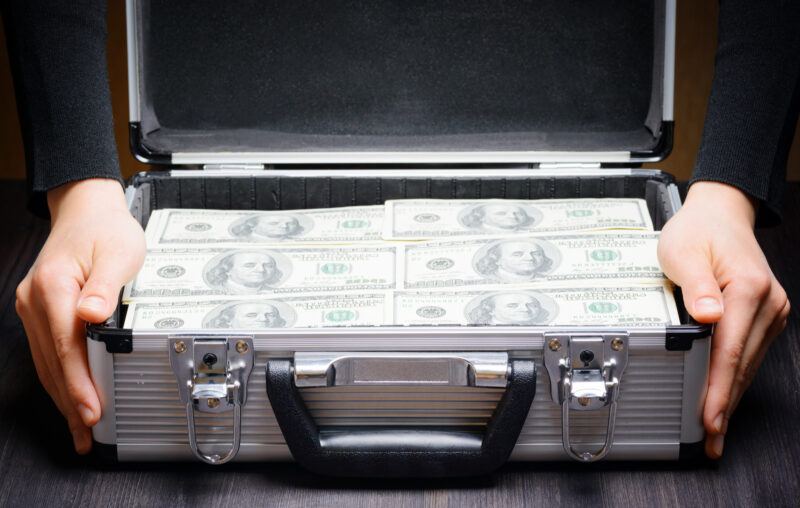 Watching the Biden administration, you’d think Uncle Sam didn’t have a care in the world. Washington is tossing more money at Ukraine, preparing to defend two more European nations, planning an Asia trip to enhance US alliances, sending troops to again battle Somali Islamists, and begging the new ruler of the United Arab Emirates to let America serve him better.

Yet the US is effectively bankrupt. The national debt already stands at 100 percent of GDP, nearing the post-World War II record. Deficits will remain about $1 trillion annually even as COVID recedes. Democratic activists continue to press the administration to expand the federal soup line, with a massive student debt writedown. And Baby Boomers continue to retire, creating what will become a red ink tsunami in coming years.

Despite a world full of seeming chaos and conflict, America remains amazingly secure. There are no serious security threats in the Western Hemisphere. The challenges faced by America from governments it dislikes, such as Cuba, Venezuela, Nicaragua, and Mexico, are mere annoyances compared to the challenges faced by most other nations, including those on Uncle Sam’s naughty list.

Indeed, the Biden administration admitted as much when it sent a delegation to Caracas to discuss the possibility of easing sanctions and returning Venezuelan oil to market. The US has been unable to oust the Maduro dictatorship, but most Americans haven’t noticed. The lack of a competing power, let alone great power nearby, frees US policymakers to meddle around the globe.

Africa is a continent of much promise and tragedy. Somalia is a shell of its former self, damaged by the struggle between the Soviet Union and US during the Cold War. President Joe Biden is sending American military personnel back to what remains of that nation. His purpose: to combat the al-Shabab Islamist militia and target its leadership. America’s withdrawal, ordered by President Donald Trump, was long overdue. Alas, Biden’s decision, noted in the New York Times by Charlie Savage and Eric Schmitt, “will revive an open-ended American counterterrorism operation that has amounted to a slow-burn war through three administrations.” A plan for success that is not. Washington should leave the conflict to Somalis and their neighbors, which already are involved through the African Union.

Worse, and certainly more shameful, has been the administration’s kowtow to the United Arab Emirates and Saudi Arabia. Washington spent decades sending US troops to act as royal bodyguards. There was plausible justification during the Cold War, when the Carter administration feared that the Soviet Union might seek to cut the West’s oil supply. That vague possibility, never very serious, disappeared long ago.

Defense is one thing, but the US has armed and supported the Saudi led, UAE supported brutal war against Yemen, making American officials complicit in endless war crimes. Outrageously, the administration apologized for not acting quick enough to protect Abu Dhabi from Yemeni retaliation for killing thousands of civilians. And neither state is paying back past US favors, rejecting desperate begging by Washington to hike oil production.

The US should suggest that the Saudi and Emirati royals use their expensive arsenals for defense rather than offense. In truth, the biggest threat to those regimes now is internal—how many Emiratis or Saudis want to die for a pampered royal elite? Let these regimes work together and with Israel to balance Iran, or even better, negotiate a modus vivendi allowing Sunnis and Shiites to live together in peace.

The President and Congress came up with $40 billion for Ukraine, almost as much as Russia devotes to its military in a year and more than European nations, other than France, Germany, and the United Kingdom, spend annually. This also is far more than the Europeans have provided to Kyiv, even though their collective economy is almost as large as America’s, and they long have refused to take their own defense seriously. Russia’s attack on Ukraine obviously matters much more to them than to the US. Amid the Europeans’ supposed military awakening, they should take the lead in backing Kyiv. So far, at least, the crisis that is supposed to energize European military outlays is costing Americans far more.

And that will get worse with the applications of Finland and Sweden to join NATO. Neither has been threatened by Moscow, which remains entangled in, and in danger of losing the war with Ukraine. Finland already has a competent force, and Kyiv has shown the way for Europe to defend itself devoting serious resources to territorial defense. The Europeans should focus on their security, not out-of-area excursions, such as in Libya a decade ago.

Neither Stockholm nor Helsinki is vital to America, which should be the primary criterion for Washington to issue a security guarantee. That is why the US and the rest of Europe refused to induct Ukraine into NATO, despite multiple promises to do so. No one was prepared to go to war for Kyiv with nuclear-armed Russia. There is no better reason to go to war with nuclear-armed Russia over Finland or Sweden.

And this would be primarily America’s burden. If Russia attacked Finland along its 810-mile border, it wouldn’t be Montenegro, Spain, or Italy that would send troops. Nor would Germany, North Macedonia, or Greece respond if Moscow used nuclear weapons. Adding two new countries to NATO would expand Americans’ military burdens yet again. President Eisenhower warned Washington against acting like “a modern Rome guarding the far frontiers with our legions.” If Europe doesn’t take over this burden when it perceives serious military danger, when will it do so?

And of course, there is Asia. The President is keen to restore America’s alliances there, too, which naturally means spending more money. He invited ASEAN members—representing Southeast Asian states—to the US and then headed off to Asia for summits with members of the Quad, as well as South Korea’s new president. The best response to China is friendly regional powers cooperating to constrain the People’s Republic of China.

That, however, would require them to spend more money on their militaries and take responsibility for day-to-day security issues. Only now is Japan apparently ready to spend more than one percent of GDP on its military, after relying on the US to do the military heavy lifting for decades. The ruling party is talking about moving to two percent, but that is unlikely to occur unless Washington makes clear that the US no longer is going to be the guardian on station in the region. If someone should defend the unpopulated but contested Senkaku/Diaoyu Islands from the PRC, it should be Japan.

South Korea too. It carries a greater defense burden since the potential threat is bigger. The Republic of Korea has about 50 times the GDP, twice the population, and a vast technological lead over North Korea. And the ROK has come through the COVID pandemic while the North faces a potentially disastrous infectious tsunami with the Omicron variant having breached its sealed borders. Why should Washington continue to station an army division on the peninsula? Why shouldn’t ROK units be created and deployed to fill the gaps currently covered by US forces?

Foreign and military policy should reflect circumstances. A greater US role was required during the Cold War when friendly states were recovering from World War II, and both the USSR and PRC presented serious military challenges. That world is long over.

That doesn’t mean that Washington faces no security challenges. They are, however, different. Most important, friendly states can do far more for themselves and their regions. Instead of risking Americans’ lives further and longer and piling America’s debt higher and wider, President Biden should be shifting security responsibilities from the US to its defense welfare recipients.

This article, Headed for Insolvency: Biden Administration Increases US Obligations Worldwide, was originally published by the American Institute for Economic Research and appears here with permission. Please support their efforts.