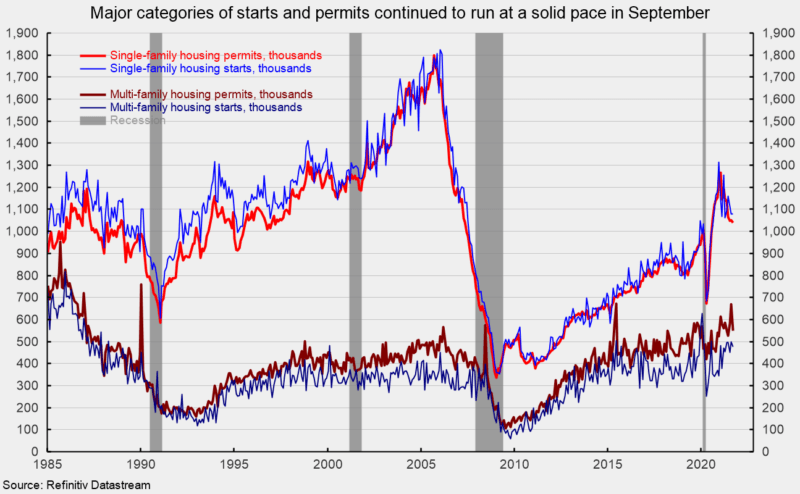 The dominant single-family segment posted a rate of 1.080 million in September, the same as in August and are down 2.3 percent from a year ago. Single-family permits experienced a 0.9 percent decline to 1.041 million versus 1.050 million in August. Single-family starts and permits have been trending lower from peaks around the start of the year but remain at a historically robust pace (see first chart).

Starts of multifamily structures with five or more units fell 5.1 percent to 467,000 but are still up a robust 38.2 percent over the past year while starts for the two- to four-family-unit segment were unchanged at an 8,000-unit pace.  Combined, multifamily starts were off 5.0 percent to 475,000 in September (see first chart) and show a gain of 38.5 percent from a year ago.

Regionally, single-family and multifamily permits followed a broadly similar pattern with declines in September, but with the overall pace holding at solid levels (see charts 2 and 3).

The surge in housing demand that sent lumber prices soaring to a peak around $1,686 per 1,000 board feet had largely reversed course, hitting a low of around $450 in mid-September. However, since the low, lumber prices have started to rise again, hitting $750 in mid-October (see fourth chart). The rebound in lumber costs will pressure profits at builders and may lead to more price increases for new homes. Furthermore, that rise coincides with a rise in mortgage rates that has seen the rate on a 30-year fixed rate mortgage move above 3 percent from about 2.5 percent in early 2021. While that is still very low by historical comparison, when combined with the sharp rise in home prices, it is likely to help soften future demand.

The post-lockdown recovery in housing had been supported by a surge in demand as consumers sought less dense housing.  However, since December, single-family activity has been trending lower, though the level of activity is still solid. It may be that some of the rush to less dense housing that drove the single-family surge in activity in the second half of 2020 is losing momentum as the economy opens, more people get vaccinated, and workers return to offices, though switching to permanent remote working arrangements by some employees may provide some extended support for housing. Also complicating the outlook, rising mortgage rates and surging home prices are pushing some buyers out of the market. Overall, housing activity has eased back from the surge in late 2020 but remains brisk. Rising home prices and mortgage rates will work to ease demand while secular shifts in housing preferences due to new remote work options may provide some support.

This article, Housing Activity Slowed in September but Remains Brisk, was originally published by the American Institute for Economic Research and appears here with permission. Please support their efforts.