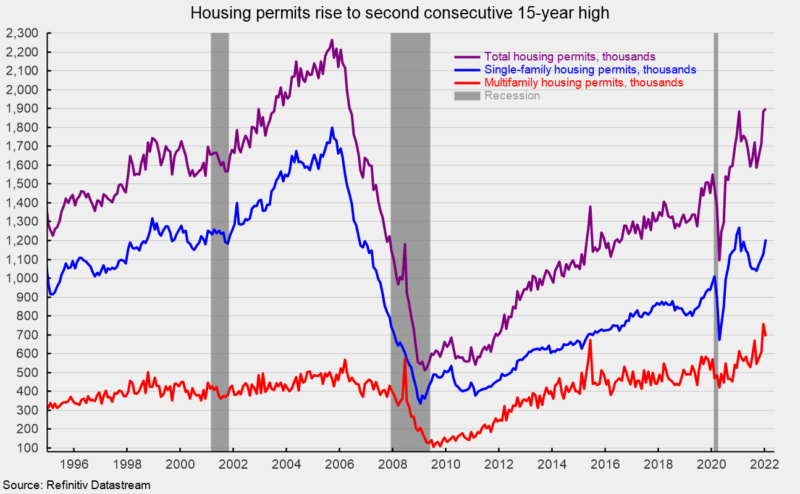 Total housing starts fell to a 1.638 million annual rate in January from a 1.708 million pace in December, a 4.1 percent decrease. From a year ago, total starts are up 0.8 percent. However, total housing permits were very strong again in January, posting a 0.7 percent gain to 1.899 million versus 1.885 million in December, the second consecutive 15-year high (see first chart). Total permits are up 0.8 percent from the January 2021 level.

Starts of multifamily structures with five or more units decreased 2.1 percent to 510,000 but are up 8.7 percent over the past year while starts for the two- to four-family-unit segment were up 140.0 percent percent at a 12,000-unit pace versus 5,000 in December. Combined, multifamily starts were off 0.8 percent to 522,000 in January and show a gain of 8.3 percent from a year ago.

Input costs continue to soar, with lumber coming in at around $1,324 per 1,000 board feet in mid-February while copper was just over $10,000 per metric ton (see third chart). The increases in input costs will pressure profits at builders and may lead to more price increases for new homes (see fourth chart).

After a pullback in activity in the first three quarters of 2021, single-family activity has shown renewed strength. While the implementation of permanent remote working arrangements for some employees may be providing continued support for housing demand, ongoing home price increases combined with the recent surge in mortgage rates may work to cool activity in coming months.

This article, Housing Permits Remained Hot in January but Mortgage Rates Also Continued to Rise, was originally published by the American Institute for Economic Research and appears here with permission. Please support their efforts.