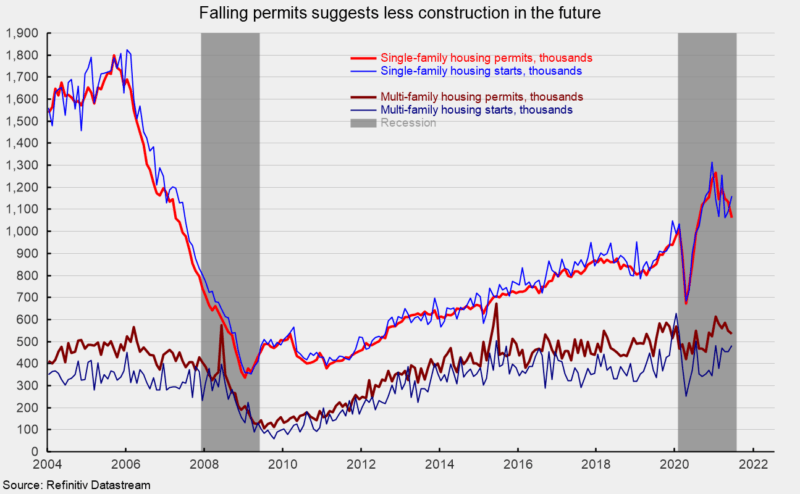 Total housing starts rose to a 1.643 million annual rate in June from a 1.546 million pace in May, a 6.3 percent increase. From a year ago, total starts are up 29.1 percent. However, total housing permits fell 5.1 percent to 1.598 million in June from 1.683 million in May. Total permits are 23.3 percent above the June 2020 level. Both continue to trend down with starts 4.8 percent below its recent peak while permits are 15.1 percent below its peak.

The dominant single-family segment saw starts rise 6.3 percent for the month to a rate of 1.160 million and are up 28.5 percent from a year ago. Single-family permits however were off 6.3 percent at 1.063 million. Single-family starts and permits are also trending lower from peaks around the start of the year (see first chart).

Single-family home construction had been one of the strongest parts of the economy last year and excluding the plunge in activity during the government-enforced lockdowns in early 2020, single-family housing activity has been on an upswing for most of the last decade, recovering from the housing bubble and collapse of the late 2000s (see first chart). The post-lockdown recovery has been supported by a surge in demand as consumers sought less dense housing.  However, since December, single-family activity has been trending lower. It may be that some of the rush to less dense housing that drove the single-family surge in activity in the second half of 2020 is starting to ease as the economy opens, more people get vaccinated, and workers return to offices, though the emergence of the delta variant is increasing uncertainty. Furthermore, surging home prices have pushed some buyers out of the market.

The surge in housing demand that sent lumber prices soaring has also reversed course in recent months as sales and construction show signs of cooling. Lumber prices peaked around $1,686 per 1,000 board feet and are currently around $552, a drop of about 67 percent. However, that is still above the $300 to $500 range of 2019 (see second chart).

Furthermore, the National Association of Home Builders’ Housing Market Index, a measure of homebuilder sentiment, fell again in July, to 80 from 81 in June and a peak of 90 in November 2020 (see second chart). Overall sentiment remains relatively high but elevated materials costs are pushing prices up and forcing some buyers out of the market, resulting in lower demand.

Housing may have enough momentum to grow at a solid pace in 2021 but the combination of softening demand as the economy reopens and rapidly rising home prices will likely result in continued cooling. For the homebuilders, rising materials costs are hurting margins or forcing price increases that hurt demand while labor difficulties restrain supply.

This article, Housing Starts Rise but Permits Fall as Pandemic Pressures Continue to Unwind, was originally published by the American Institute for Economic Research and appears here with permission. Please support their efforts.