How Thomas Aquinas Desacralized the State 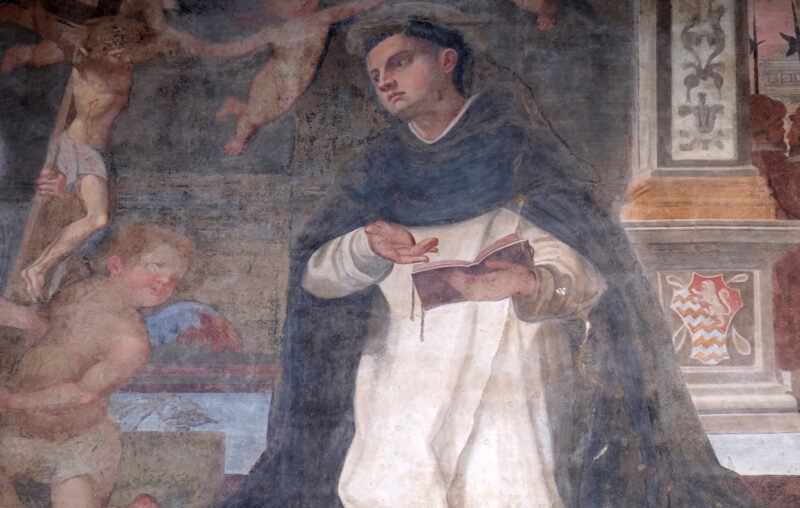 The state is back. On the left and right, significant numbers of thinkers and voters in Western democracies are looking to government to solve our problems, real and imagined. Whether it is climate change, economic challenges, or sudden surges of migrants across sovereign borders, the demand for state action is high.

One side-effect of this shift away from the more skeptical views of government intervention that prevailed roughly between 1980 and the 2008 Financial Crisis has been a reinvigorated discussion of the nature and scope of government authority. Liberal conceptions of the state have been confronted by a wave of alternatives coming from across the political spectrum. If there is anything that the woke left have in common with those on the right who want to “punish enemies and reward friends,” it is skepticism about the liberal constitutionalism that started taking on decisive form in the late-seventeenth century.

Often missing from this account is awareness that liberal constitutionalism’s roots go beyond the seventeenth-century struggle against monarchial absolutism in the British Isles and the various eighteenth-century Enlightenments. The historian Lord Acton once suggested that some basic principles of a Whig theory of the state go back to Thomas Aquinas.

This judgment has been affirmed, albeit with caveats, by some contemporary natural law theorists. John Finnis argues, for example, that it is possible to designate Aquinas as “a liberal because, though he rightly defended institutions and practices on the basis that they are required or authorized by certain moral and metaphysical truths, he at the same time insisted that the proper functions of the state’s laws and rulers do not include making people morally all-round good by compulsorily requiring them to refrain from immorality.” Instead, Finnis maintains, “The role of state government and law . . . . is to uphold justice and peace: the requirements imposed, supervised, and enforced by state government and law concern only those choices and actions which are external and affect other people.”

Other natural law thinkers dispute that this was Aquinas’s position. In seeking to determine Aquinas’s stance, scholars have generally focused upon his Summa Theologiae (especially the Treatise on Law) as well as his Sententia Libri Ethicorum and Sententia Libri Politicorum.

The place of Aquinas’ only free-standing political work, De Regno (c. 1267), in these debates has been a point of contention. That’s partly because of longstanding disputes about how much of De Regno was written by Aquinas and what was penned by some of his students, particularly Ptolemy of Lucca. What is clear is that De Regno was written to an actual ruler (the Norman King of Cyprus), and its immediate purpose was to help him navigate the practical demands of everyday politics. Being a less-theoretical text, De Regno is often treated as an outlier to Aquinas’s primary theological and philosophical writings.

But is De Regno an outlier? That is one question explored by William McCormick, SJ in his book The Christian Structure of Politics: On the De Regno of Thomas Aquinas (2022). It is the first systematic analysis of De Regno to be written in several decades. For that reason alone, it is worth our attention.

McCormick does not treat De Regno as a medieval curiosity. Certainly, McCormick says, it is “a peculiar text written for a particular audience.” Nonetheless McCormick maintains that the “vision of politics in De Regno” can help us determine the proper relationship between religion and politics today. Much of this project is pursued via McCormick examining De Regno through Aristotelian and Augustinian lens—the dominant philosophical and theological reference-points of Aquinas’s time.

McCormick’s first chapter shows how De Regno’s early sections embody an Aristotelian view of politics, most notably the idea “that politics is natural to man, that the best regime is rational and fulfilling of human ends, and that monarchy is the best regime.” This theme is further explored in chapter 2 where McCormick directs attention to Aquinas’s thoughts on tyranny. Aquinas’s emphasis, McCormick claims, is less upon tyranny per se than it is upon the indispensability of those in politics living virtuous lives, and the need for moderate expectations of what politics can achieve.

This more Augustinian view of politics stands in tension with that of Aristotle, and McCormick devotes his third chapter to showing how De Regno resolves these differences. This occurs, he suggests, by way of Aquinas stressing that the proper ends of human action can never be fulfilled through politics. For man’s final end is beatitude, and no regime can realize that for those subject to its authority.

It’s true, McCormick notes, that Aquinas draws a parallel between God and the king. This commonplace metaphor in medieval thought later influenced early-modern absolutism. But according to McCormick, Aquinas holds that “the earthy king is God-in-his-kingdom only in a limited sense.” Yes, the ruler’s role is governance of the polity. But no regime can create the pre-political order willed into existence by God and which infuses humanity and the world with reason itself. That insight, McCormick contends, allows Aquinas to desacralize “kingship in a fashion highly unique for his time.”

From this point onwards, McCormick shifts his analysis of De Regno towards its significance for our time. De Regno’s desacralization of the ruler, he argues, facilitates a better appreciation of the idea, associated with Pope Gelasius I and subsequently developed by Christian thinkers, that two authorities govern human affairs: the church’s spiritual authority and the secular government’s temporal authority. The former is considered superior to the latter on account of the church’s concern for humanity’s ultimate end.

Some might suggest that this theory of politics constitutes the essence of integralism and thereby forestalls any significant engagement with modern ideas like liberalism. Not so, according to McCormick. Though he does not present Aquinas as a liberal, McCormick claims that De Regno’s conception of politics gels well with some expressions of liberalism, and less well with others.

De Regno, McCormick points out, is decidedly at odds with liberal rationalism. By this, he means a liberal state which views intermediate groups as potential threats to the individual’s ability to pursue self-realization, often over and against the competing authority of customs and tradition to which many groups, especially religious entities, are attached. Ergo, the liberal state must be strong enough to subordinate these groups to its will. In this world, religious liberty is reduced to the government defending individual conscience against group pressure. That understanding of religious freedom is different from that articulated by Vatican II’s Dignitatis Humanae. It grounded religious liberty in the duty of individuals and groups to pursue knowledge of truth and then live their lives as individuals and communities in accordance with those truths, unconstrained by unreasonable forms of state coercion.

For McCormick, however, that is not the end of the story. Insofar as liberalism is about pluralism, understood as free people living as individuals and groups in a given society, it implies major limits to state power. De Regno’s take on Gelasian dualism, McCormick posits, can be seen as a forerunner to this understanding of pluralism. Obviously the scope of pluralism in the world of medieval Christendom is different to that of the twenty-first century West. We can also wonder what, in the absence of widespread commitment to certain religious and philosophical claims, is to stop liberal pluralism from collapsing into aggressive tribalism.

That said, both modern pluralism and De Regno reject not only the idea of an omnipotent state, but also civil religion (the state usurping religious authority and commandeering religion for its own purposes) and theocracy (religious officials assuming political authority). Moreover, pluralism provides, McCormick says, “a fundamentally more modest and more humble account of politics and society” than rationalism, especially given pluralism’s recognition that groups “have life before the state” and, at least in the church’s case, “after the state” as well. The same modesty about the state’s competence is integral to De Regno’s theory of politics.

This form of pluralism fits well with the Christian emphasis on what McCormick calls the gap between the world in which humans live and the world that is to come. Theologians and philosophers have long wrestled with the meaning of this fissure for living a Christian life and its implications for politics.

Augustine explored the topic via his idea of the Two Cities. By contrast, McCormick states, Rousseau regarded this gap as creating excuses for not acting through politics to create a better world. Liberation theologians, one might add, sought a solution by immanentizing the eschaton via their embrace of Marxist analysis. In doing so, they collapsed faith into politics and reduced the church to a just another political organization peddling heaven-on-earth illusions. The subsequent damage still marks Latin American Catholicism today. Nor is it difficult to detect a high amount of immanentism among those contemporary Christians and Jews for whom religious faith is mostly about social justice—and little else.

De Regno, according to McCormick, seeks to help rulers manage this tension, not least by avoiding apathy, utopianism, or putting too much faith in politics. Therein lies De Regno’s practicality. It’s not about being pragmatic, let alone a practitioner of realpolitik. Instead, De Regno encourages rulers to pursue noble ends but does not promise rulers that they will attain their goals. Instead, the king is encouraged to be someone who promotes peace and justice in a manner that orientates him and his subjects towards—but without him seeking to instantiate—“the beatitude mediated by the church,” something that rules out thinking that it is possible to do evil that good may come of it. For McCormick, the path laid out by De Regno for the ruler is one which allows him “to grow in virtue and to serve his people not despite of the gap, but because of it.”

This adds up to a delicate idea of politics that reflects Aquinas’s careful integration of Aristotelian ethics and Augustinian political theology with knowledge of the ultimate horizons towards which Revelation points. Indeed, it may be too fragile a political project. For the way of doing politics outlined in De Regno relies upon rulers, citizens, and clergy maintaining subtle distinctions in their minds about who should say and do what, and when. That’s a hard ask at the best of times, as illustrated by the sheer number of legislators and clerics today and in the past inclined to pronounce endlessly about things that they have neither the responsibility nor proficiency to address.

If, however, one wants to avoid the pitfalls of integralist or progressivie statism, De Regno’s vision of politics has much to teach us. Describing Aquinas as a liberal will always generate controversy. Nonetheless, McCormick illustrates that Aquinas’s De Regno provides us with a politics that takes liberty and virtue seriously—but always together and never apart. And that should matter to anyone, religious or otherwise, who refuses both nihilism and collectivism.

This article, How Thomas Aquinas Desacralized the State, was originally published by the American Institute for Economic Research and appears here with permission. Please support their efforts.