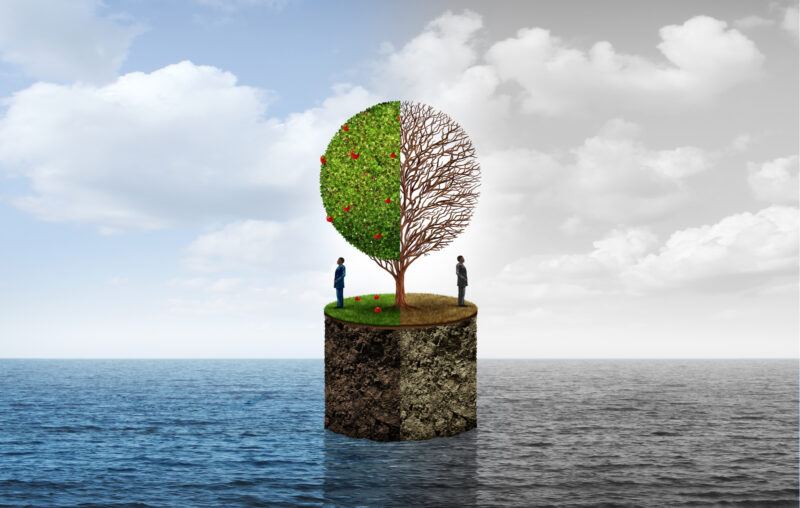 Italian economist and engineer Vilfredo Pareto (1848-1923) conjectured that for any population, income naturally follows a log-normal distribution. The normal, or Gaussian distribution ranges from negative to positive infinity with a central mean. Because logarithms are always positive, the log-normal distribution ranges from zero to positive infinity with a positive mean, consistent with there being no upper bound for the highest incomes. Pareto’s approximation describes the distribution of incomes within a country accurately except for the highest one to three percent. French-American polymath Benoit Mandelbrot (1924-2010) demonstrated that the logarithm of his fat-tailed Mandelbrot-Lévy or stable Paretian distributions model income well at all levels. This indicates that greater shares of overall income are received by the very wealthy individuals in the upper-tail of the income distribution (Figure 1).

American economist Simon Kuznets (1901-1985) suggested income inequality rises during the process of industrialization but falls later, an observation formalized as the Kuznets curve (Figure 2). The rationale for the Kuznets curve is that the individuals who implement emerging technologies during early-stage industrialization initially capture most of the benefits of economic growth. Later, income inequality falls during later-stage industrialization as technological progress is diffused more broadly and raises worker productivity and wages throughout the economy. This has been observed generally for industrialized countries from about 1870.

Because pollution accompanies industrialization and disproportionately impacts the poor, the related concept of the environmental Kuznets curve also becomes relevant (Figure 3). Kuznets also observed that during the transition from an agrarian to an industrial economy, not only does income become increasingly concentrated, but pollution and natural resource depletion occur at accelerating rates. As industrialization and technical progress increase wealth, albeit unequally, life expectancy and the population also increase. The larger population further contributes to economic activity, but also to pollution emissions, resource depletion, and environmental degradation. However, once a society attains a certain level of affluence and well-being, environmental impact becomes sufficiently recognized, triggering anti-pollution regulations and a shift toward less environmentally damaging practices and technologies. Environmental quality then starts to improve as later-stage industrialization proceeds, the society continues to progress both culturally and economically, becomes even wealthier, and can now afford to focus on alleviating and remediating environmental impacts.

How public policy approaches income inequality depends on whether it is viewed as a value-neutral empirical observation, or as resulting from a pernicious failure of social justice. The first does not call for a public policy response, but the second does. Furthermore, the appropriate response should not be aimed at alleviating income inequality per se, but must also consider whether the causes of inequality are inherently unjust, as only unjust causes can justify correction through policy, regulation, or legislation. Income inequality arises naturally because talent, entrepreneurial awareness, aesthetic sensibilities, technical knowledge, physical strength, work ethic, etc., vary naturally from one person to the next. Individuals who possess or acquire abilities enabling them to produce greater value for others in society should be rewarded for it through free exchange, otherwise there will be no incentive to benefit others, or reward for doing so.

It thus becomes important to distinguish between sources of inequality that are morally objectionable and those that are not. For example, enslaved people provided their owners significant income without benefiting themselves. Even after emancipation, formerly enslaved people still faced many decades of structural discrimination where their rights to their own income and property were not equally protected either de jure or de facto. Even enslaved people who had acquired technical skills, e.g., as blacksmiths, mechanics, mariners, technicians, etc., generally lost access to the capital equipment they were trained to use. Though they might retain the technical knowledge, a recently-emancipated blacksmith still faced the burden of acquiring the equipment and tools needed to practice his trade. This barrier must be overcome for his income to rise above the value of his physical labor alone.

Furthermore, most enslaved people would have acquired more education, training, and capital equipment than they were permitted to before emancipation, and in many cases discrimination continued to prevent them from doing so for long afterward. An individual’s place in the income distribution does not generally persist from one generation to the next unless underlying structural limitations also persist, e.g., institutional discrimination, which can potentially be addressed through public policy.

The most common arguments against income inequality fail to consider whether it has arisen through rewarding growth-enhancing productive activities which benefit the whole of society, or from unproductive rent-seeking which holds back worker productivity and economic growth. Rent-seeking is the pursuit of income based on legal-institutional inefficiencies. One form of rent-seeking occurs when an industry lobbies the government for subsidies, favorable tax treatment, restrictive licensing, or regulation which prevents or suppresses competition, providing the protected industry monopoly profits at the expense of their customers.

These measures provide the lobbying organizations and industries additional income, without their having to produce any added value for society. Rent-seeking shields less productive organizations from competition and enables them to extract higher prices from the public. Rent-seeking organizations also use bribery and political contributions to encourage elected officials and unelected bureaucrats to maintain a legal-institutional environment that shields them and their product from competition, and enables them to charge higher prices. Rent-seeking may raise incomes within the privileged organization or industry, but this can only come at the expense of others in society. Such non-productive rent-seeking calls for reform of the perverse legal-institutional environment so that rent-seeking is not rewarded or encouraged.

Inflation is another cause of income inequality, since higher-income households generally borrow more and are less likely to default on their loans. Inflation enables them to repay their loans with money of lower purchasing power, transferring wealth from lenders to borrowers. A lower percentage of low-income households benefit from inflation through borrowing, and those that do generally benefit to a lesser extent than high-income households. Thus, one of the most important policies the government could enact to lessen income inequality would be to lower or eliminate inflation.

Invariably, however, the proposed solution to any form of income inequality has been an indiscriminate and highly punitive progressive tax on all income and wealth, regardless of how it was earned. Unfortunately, such a broad and indiscriminate tax further diverts resources and talent toward unproductive rent-seeking. Note further that the evidence of income inequality employed to justify such measures generally relies on flawed measures which ignore the impact of progressive taxes and transfer payments, both of which act to alleviate existing income inequality. This purported solution of punitive tax policy is invariably worse than the problem it was designed to solve.

This article, Income Distribution and Inequality, was originally published by the American Institute for Economic Research and appears here with permission. Please support their efforts.