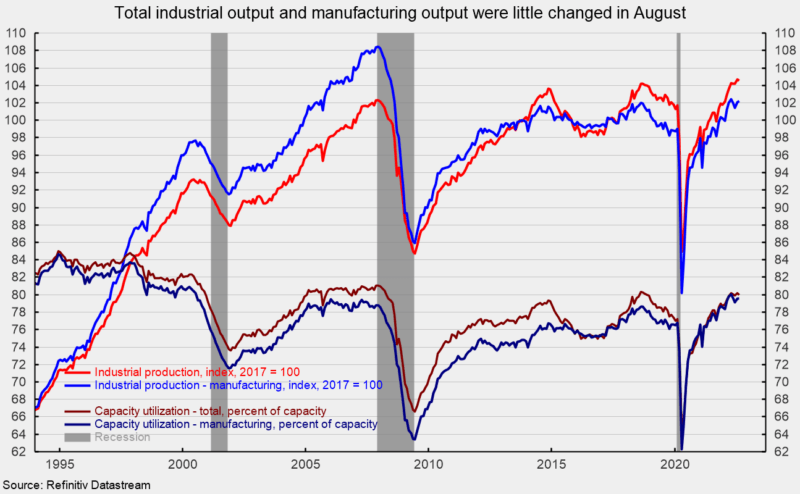 Total industrial capacity utilization decreased 0.2 points to 80.0 percent from 80.2 percent in July. The August utilization is above the long-term (1972 through 2021) average of 79.6 percent but well below the highs of the 1970s when it was above 88 percent.

Manufacturing output – about 74 percent of total output – posted a modest 0.1 percent gain for the month, the second consecutive increase and fourth in the last six months but also the smallest over that period (see first chart). From a year ago, manufacturing output is up 3.3 percent.

Manufacturing utilization was unchanged at 79.6 percent, holding above its long-term average of 78.2 percent. However, it remains well below the 1994-95 high of 84.7 percent.

Mining output accounts for about 16 percent of total industrial output and was unchanged last month following three strong monthly gains (see top of second chart). Over the last 12 months, mining output is up 8.4 percent. Utility output, typically related to weather patterns and about 10 percent of total industrial output, fell 2.3 percent, with natural gas up 0.6 percent but electric down 2.9 percent. From a year ago, utility output is down 1.6 percent.

Total vehicle assemblies rose to 10.48 million at a seasonally-adjusted annual rate. That consists of 10.16 million light vehicles (see third chart) and 0.31 million heavy trucks. Within light vehicles, light trucks were 8.38 million while cars were 1.78 million. Assemblies have risen sharply from the lows but remained at the bottom of their prior typical range.

All other industries combined (total excluding energy, high-tech, and motor vehicles; about 66 percent of total industrial output) was unchanged in August (see bottom of second chart). This important category is 2.6 percent above August 2021.

This article, Industrial Output Fell, but Manufacturing Output Rose Slightly in August, was originally published by the American Institute for Economic Research and appears here with permission. Please support their efforts.