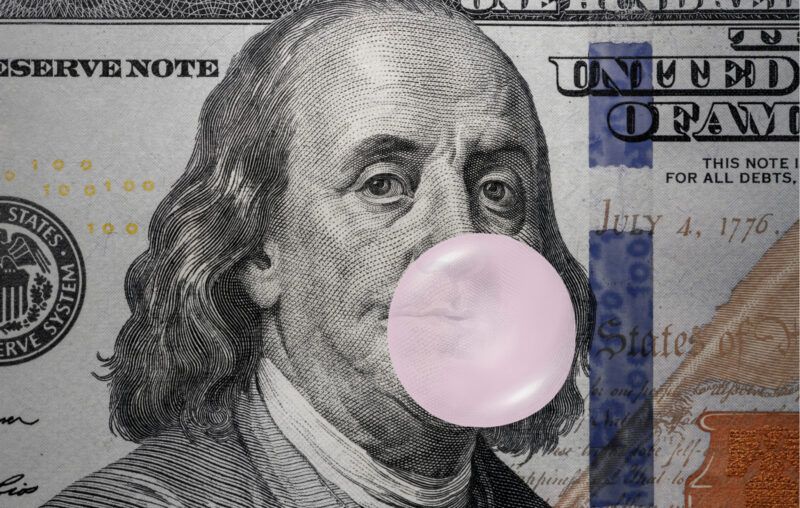 As Nobel Prize-winning physicist Niels Bohr once quipped: “Prediction is very difficult, especially if it’s about the future.” Members of the Federal Open Market Committee (FOMC) can surely relate. Despite having ten months of data and the levers of monetary policy in hand, inflation has overshot their projection for 2021.

On December 15, 2021, the Federal Reserve released its Summary of Economic Projections, which reports the median, central tendency, and range of projections for inflation and other macroeconomic variables submitted by FOMC members. FOMC members are instructed to make projections based on the assumptions that the Fed conducts monetary policy appropriately, as they see it, and that the economy is not affected by any further shocks. The median FOMC member projected inflation at 5.3 percent for 2021. The central tendency was 5.3 to 5.4 percent and the range was 5.3 to 5.5 percent. Hence, most FOMC members projected 5.3 percent inflation for 2021, and none projected inflation in excess of 5.5 percent. These projections can be used to forecast the price level, as shown in the figure below.

It is worth noting that at the time when the Summary of Economic Projections was released, Fed officials had access to at least ten months of price level data for the year. The personal consumption expenditures price index (PCEPI) for October had been available since November 24 and inflation had been relatively high up until that point. If prices continued to grow at the same rate as they had over the first ten months of 2021, annual inflation would have clocked in at nearly 5.5 percent––the high end of their projections. In projecting 5.3 percent inflation for 2021, the median FOMC member was implicitly saying they expected inflation to fall over the last two months of the year.

They were wrong. Inflation did not fall. Prices climbed above the Fed’s forecast in November and remained elevated in December. Inflation averaged 5.6 percent for the year—exceeding the entire range of projections offered by FOMC members in December.

Why did FOMC members underestimate inflation? The assumptions underlying their projections offer two explanations, neither of which is very satisfying.

Recall further that FOMC members are instructed to assume the economy is not affected by any further shocks over the projection period. All else equal, an unexpected decline in total factor productivity or surge in nominal spending would cause prices to rise more than expected. But it is hard to point to any such shocks over the period in question.

The FOMC made its inflation projections in mid-December, with just sixteen days remaining in the year. Although the precise price level data was not yet available, FOMC members were aware of the events that had unfolded in November and nearly half of December. It is difficult to imagine how a shock big enough to cause a 20-basis point miss would have gone unnoticed by the well-briefed members of the FOMC.

I chalk it up to wishful thinking. Fed officials were not yet willing to tighten monetary policy. They hoped inflation would get better on its own. It didn’t, and their projections underestimated inflation as a result. That’s understandable. But we should keep this error in mind when considering future FOMC projections.

This article, Inflation Exceeds Fed’s Projection, was originally published by the American Institute for Economic Research and appears here with permission. Please support their efforts.