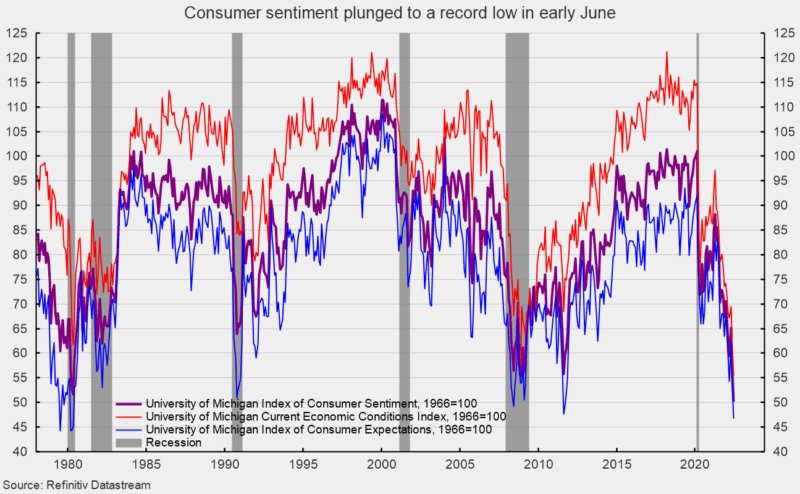 The preliminary June results from the University of Michigan Surveys of Consumers show overall consumer sentiment plunged again in early June (see first chart). The composite consumer sentiment decreased to 50.2 in early June, down from 58.4 in May, a loss of 8.2 points or 14.0 percent. The index is at a record low and consistent with prior recessions.

Both component indexes posted sharp declines. The current-economic-conditions index fell to 55.4 from 63.3 in May (see first chart). That is a 7.9-point or 12.5 percent decrease for the month and leaves the index at a record low.

The second sub-index — that of consumer expectations, one of the AIER leading indicators — lost 8.4 points or 15.2 percent for the month, dropping to 46.8 (see first chart). The index is at its lowest level since May 1980.

According to the report, “All components of the sentiment index fell this month, with the steepest decline in the year-ahead outlook in business conditions, down 24% from May.” The report goes on to add, “Consumers’ assessment of their current financial situation relative to a year ago is at its lowest reading since 2013, with 36% of consumers attributing their negative assessment to inflation.” Furthermore, “Consumers’ assessments of their personal financial situation worsened about 20%. Forty-six percent of consumers attributed their negative views to inflation, up from 38% in May; this share has only been exceeded once since 1981, during the Great Recession.”

The one-year inflation expectations rose to 5.4 percent in early June, rebounding to the March and April 2022 levels and tying with the highest level since November 1981. The one-year expectations has spiked above 3.5 percent several times since 2005 only to fall back (see second chart).

The five-year inflation expectations jumped to 3.3 percent in early June. That result is the highest since June 2008 but remains within the 25-year range of 2.2 percent to 3.5 percent (see second chart).

According to the report, “Overall, gas prices weighed heavily on consumers, which was no surprise given the 65 cent increase in national gas prices from last month (AAA). Half of all consumers spontaneously mentioned gas during their interviews, compared with 30% in May and only 13% a year ago.”

The report adds, “Consumers expect gas prices to continue to rise a median of 25 cents over the next year, more than double the May reading and the second highest since 2015. In addition, a majority of consumers spontaneously mentioned supply shortages for the ninth consecutive month.”

The plunge in consumer attitudes reflects a confluence of events with inflation leading the pack. Persistent elevated price increases affect consumer and business decision-making and distorts economic activity. Overall, economic risks remain elevated due to the impact of inflation, the start of a Fed tightening cycle, the Russian invasion of Ukraine, and renewed lockdowns in China. The ramping up of negative political ads as the midterm elections approach June may also weigh on consumer sentiment in coming months. The overall economic outlook remains highly uncertain.

This article, Inflation Fears Send Consumer Sentiment Plunging to a Record Low in Early June, was originally published by the American Institute for Economic Research and appears here with permission. Please support their efforts.