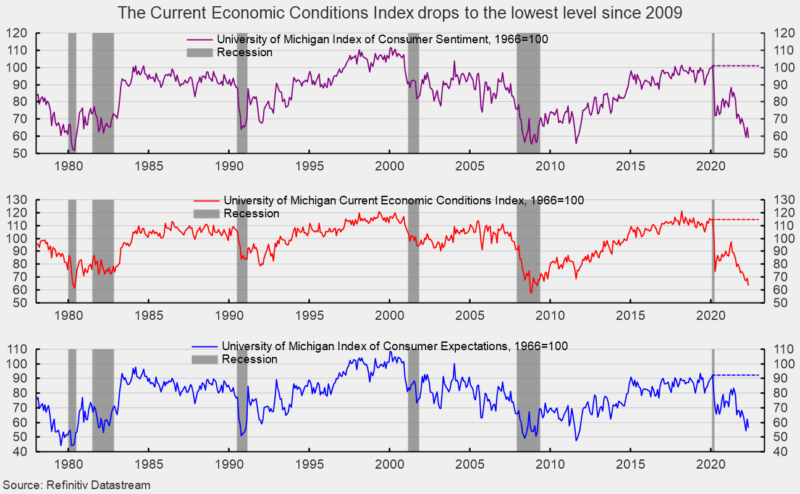 Both component indexes posted declines. The current-economic-conditions index fell to 63.6 from 69.4 in April (see the middle of the first chart). That is a 5.8-point or 8.4 percent decrease for the month and leaves the index with a 51.2-point drop since February 2020, and puts the index at its lowest level since March 2009.

The second sub-index — that of consumer expectations, one of the AIER leading indicators — lost 6.2 points or 9.9 percent for the month, dropping to 56.3 (see bottom of first chart). The index is off 35.8 points since February 2020.

All three indexes are near or below the lows seen in four of the last six recessions (see first chart).

According to the report, “These declines were broad based – for current economic conditions as well as consumer expectations, and visible across income, age, education, geography, and political affiliation – continuing the general downward trend in sentiment over the past year.” The report goes on to add, “Consumers’ assessment of their current financial situation relative to a year ago is at its lowest reading since 2013, with 36% of consumers attributing their negative assessment to inflation.” Furthermore, “Buying conditions for durables reached its lowest reading since the question began appearing on the monthly surveys in 1978, again primarily due to high prices.”

The one-year inflation expectations was unchanged at 5.4 percent in early May, the highest level since November 1981. The one-year expectations has spiked above 3.5 percent several times since 2005 only to fall back (see second chart). The five-year inflation expectations remained unchanged at 3.0 percent in early May. That result remains well within the 25-year range of 2.2 percent to 3.5 percent (see second chart).

According to the report, “The median expected year-ahead inflation rate was 5.4%, little changed over the last three months, and up from 4.6% in May 2021. The mean was considerably higher at 7.4%, reflecting substantial variation in price changes across types of goods and services, and in household spending patterns.”

The report adds, “At the same time, long term inflation expectations remain well-anchored with a median of 3.0%, settling within the 2.9 to 3.1% range seen over the last 10 months.”

The weakening trend in consumer attitudes reflects a confluence of events with inflation leading the pack. Persistent elevated price increases affect consumer and business decision-making and distorts economic activity. Overall, economic risks remain elevated due to the impact of inflation, the start of a Fed tightening cycle, the Russian invasion of Ukraine, and renewed lockdowns in China. The ramping of negative political ads as the midterm elections approach may also weigh on consumer sentiment in coming months. The overall economic outlook remains highly uncertain.

This article, Inflation Fears Send Consumer Sentiment Sharply Lower in Early May, was originally published by the American Institute for Economic Research and appears here with permission. Please support their efforts.