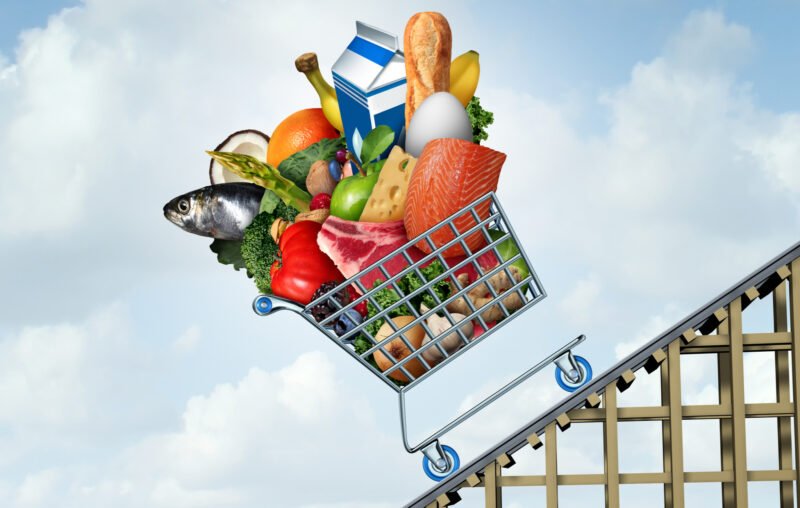 The latest release from the Bureau of Economic Analysis shows that prices rose rapidly in April 2022, though not quite as fast as in the previous month. The Personal Consumption Expenditures Price Index (PCEPI), which is the Federal Reserve’s preferred measure of inflation, grew 0.2 percent over the last month. It grew 0.9 percent in March and 0.5 percent in February.

Some will no doubt celebrate the decline in inflation. But a closer look at the data reveals little cause for celebration. The month-over-month decline appears to be entirely driven by the temporary surge in food and energy prices in March. More broadly, inflation remains high.

Headline and Core PCEPI are presented in Figure 1 alongside a 2-percent growth path projected from January 2020. Headline PCEPI, which includes all prices, grew at a continuously-compounding annual rate of 6.1 percent from April 2021 to April 2022. It has grown 4.0 percent per year since January 2020, just prior to the pandemic. Prices today are 4.7 percentage points higher than they would have been had they grown at 2 percent over the period, in line with the Fed’s average inflation target.

Core PCEPI, which excludes food and energy prices, grew at a continuously-compounding annual rate of 4.8 percent from April 2021 to April 2022. It has grown 3.3 percent per year since January 2020 and is currently 3.2 percentage points above the 2-percent growth path.

As Figure 1 shows, the slowdown in headline inflation does not coincide with a similar decline in core inflation. Supply disturbances—most notably, Russia’s invasion of Ukraine—caused food and energy prices to surge in March. These prices remain high. The BEA reports energy prices were 30.4 percent higher in April 2022 than in the previous year, while food prices were 10.0 percent higher. But they are not growing as rapidly. Food prices grew 1.0 percent in April, compared with 1.4 percent in the previous month. Energy prices, which grew 11.7 percent in March, declined by 2.8 percent in April.

Taken together, the data show that prices continue to grow more or less as rapidly as they were prior to the uptick in March.

The Fed increased its federal funds rate target by 50 basis points in May 2022 and looks set to follow with similar rate hikes in June and July. The price level data from April shows no anticipatory effects of the policy. Perhaps we will start to see a lasting decline in inflation next month, but the breakeven PCEPI data suggests bond traders are not convinced. The Fed would need to do a lot more than is currently anticipated to bring inflation—and inflation expectations—back down to 2 percent in the near term.

This article, Inflation Slowed in April, But Remains High, was originally published by the American Institute for Economic Research and appears here with permission. Please support their efforts.