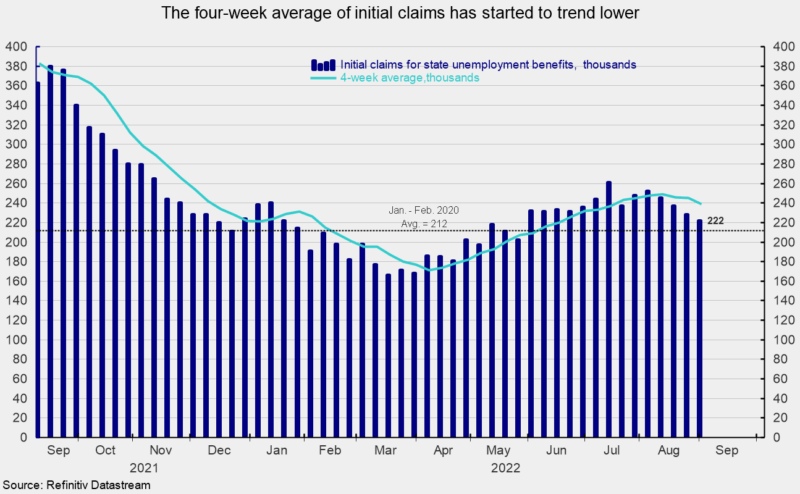 Initial claims for regular state unemployment insurance fell by 6,000 for the week ending September 3rd, coming in at 222,000. The previous week’s 228,000 was revised down from the initial tally of 232,000 (see first chart). Claims have fallen for four consecutive weeks but remained above the pre-pandemic average of 212,000 for the fourteenth consecutive week. When measured as a percentage of nonfarm payrolls, claims came in at 0.160 percent for the month of August, down from 0.171 in July but still above the record low of 0.117 in March (see second chart).

The four-week average fell to 233,000, down 7,500 from the prior week. After showing a sustained upward trend since a recent low in early April, the four-week average may be starting to trend lower again. Overall, the data continue to suggest a tight labor market. However, continued elevated rates of price increases, an aggressive Fed tightening cycle, and fallout from the Russian invasion of Ukraine represent risks to the economic outlook.

The number of ongoing claims for state unemployment programs totaled 1.388 million for the week ending August 20th, a drop of 23,994 from the prior week (see third chart). State continuing claims had been trending higher but now appear to be trending lower over the last few weeks (see third chart).

The latest results for the combined Federal and state programs put the total number of people claiming benefits in all unemployment programs at 1.415 million for the week ended August 20th, a decrease of 23,283 from the prior week. The latest result is the twenty-eighth week in a row below 2 million.

Initial claims remain at a very low level by historical comparison, but the recent upward trend was suggesting that, on the margin, the labor market has begun to loosen. That trend now appears to be reversing.

Weekly initial claims for unemployment insurance is an AIER leading indicator and turned into a neutral contributor in the August update. However, if the recent upward trend were to resume, it would likely turn to a negative contributor in upcoming updates. While the overall low level of claims combined with the high number of open jobs suggests the labor market remains solid, both measures have shown some signs of softening. The tight labor market is a crucial component of the economy, providing support for consumer spending. However, persistently elevated rates of price increases already weigh on consumer attitudes, and if consumers lose confidence in the labor market, they may significantly reduce spending. The outlook remains highly uncertain.

This article, Initial Claims Fall for the Fourth Consecutive Week, was originally published by the American Institute for Economic Research and appears here with permission. Please support their efforts.