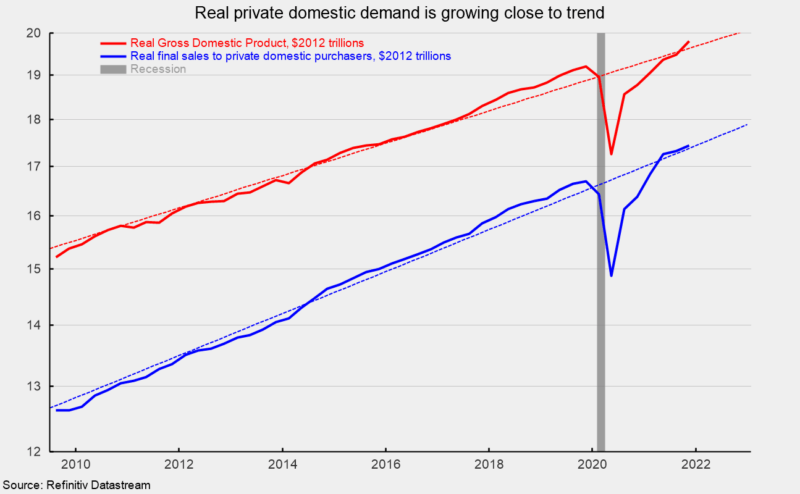 Business fixed investment increased at an 2.0 percent annualized rate in the fourth quarter of 2021, contributing 0.28 percentage points to final growth. That gain was led by a 10.6 percent jump in intellectual-property investment (adding 0.53 points to growth) and a 0.8 percent gain in spending on equipment (adding 0.05 percentage points). Those gains were partially offset by a decline in spending on business structures where spending fell at an 11.4 percent rate, the third decline in a row, and subtracting 0.30 percentage points from final growth.

Businesses added to inventory at a $173.5 billion annual rate (in real terms) in the fourth quarter versus liquidation at a $66.8 billion rate in the fourth quarter, adding a whopping 4.9 percentage points to fourth-quarter growth (see third chart). The inventory accumulation helped boost the real nonfarm inventory to real final sales of goods and structures ratio to 3.87 from 3.80 in the third quarter and 3.75 in the second quarter.  This is still below the 4.3 average for the 10 years through 2019 (see fourth chart).

Exports rose at a 24.5 percent pace while imports rose at a 17.7 percent rate. Since imports count as a negative in the calculation of gross domestic product, a gain in imports is a negative for GDP growth, subtracting 2.43 percentage points. The rise in exports added 2.43 percentage points. Net trade, as used in the calculation of gross domestic product, had a negligible impact on overall growth.

Government spending fell at a 2.9 percent annualized rate in the fourth quarter compared to a 0.9 percent pace of growth in the third quarter, subtracting 0.51 percentage points from growth.

Lingering materials shortages, labor constraints, and logistical problems are sustaining upward pressure on prices. However, there are some signs that some bottlenecks may be starting to ease. Furthermore, the Federal Reserve is moving to hike interest rates, likely starting in March, and planning on taking actions to reduce its holding of fixed income securities. These measures should lead to higher short-term and long-term interest rates, thereby reducing demand and eventually loosening the labor market, all of which should ease upward pressure on prices.

The outlook is for continued economic growth, but history suggests that the risk of policy mistakes rises during Fed tightening cycles. Additionally, 2022 is a Congressional election year. Intensely bitter partisanship and a deeply divided populace could lead to turmoil as confidence in election results are coming under constant attack. Contested results around the country could easily lead to government paralysis, testing the durability of democracy and the union itself.

This article, Inventory Accumulation Boosts Real GDP Growth in the Fourth Quarter, was originally published by the American Institute for Economic Research and appears here with permission. Please support their efforts.