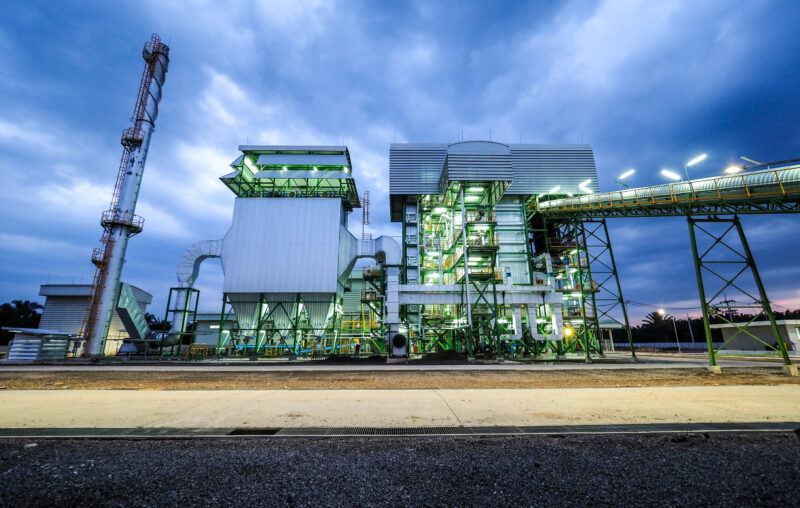 Industrial wind turbines and solar panels get the lion’s share of attention as “green” alternatives to fossil fuels. But biomass is in the mix, and like the other two, it presents stark tradeoffs that complicate government and NGO efforts to move the world off carbon-based energies. It is not easy being green, especially with a renewable that emits both carbon dioxide and significant pollutants.

Biomass power plants use wood and wood products, trees and forestry residues, as well as mill residues such as bark and sawdust, in place of fossil fuels. Advocates hope to create a sustainable cycle of harvesting, burning, and replanting in a way that adds no net carbon dioxide emissions to the atmosphere, growing new trees to remove the carbon added to the atmosphere by burning mature ones. Burning fossil fuels, by contrast, takes carbon that has long been sequestered and adds it to the atmosphere.

At first glance, the use of biomass appears to be a plausible solution to reducing carbon emissions. Serious opposition has arisen, however, after whole forests were clearcut to provide wood pellets to fuel biomass plants in the United Kingdom and the European Union.

The debate is even more significant because the United States, the UK, and the EU are subsidizing biomass power plants to the tune of billions of dollars every year. In the U.S., the federal government is spending about $13 billion annually through tax preferences and special programs administered by the U.S. Department of Energy, the U.S. Department of Agriculture, and other agencies. And across the pond, as Mary S. Booth with the Partnership for Policy Integrity observes:

Bioenergy operators in the European Union receive more than 16 billion euros in renewable energy subsidies annually…, and power plants burning biomass large enough to be subject to the EU’s carbon trading regulations avoid upwards of 5 billion euros (approximately $5.5 billion in US dollars) in carbon fees annually that they would have had to pay if biomass were not treated as having zero emissions.

Booth’s article is part of a biomass energy debate hosted by the Bulletin of the Atomic Scientists, and published in the May 2022 issue of its digital magazine. Papers arguing against biomass power make the following points:

The papers arguing for biomass claim that it can be done sustainably, but only if done right by:

Raymond Pierrehumbert, the author of one of the pro-biomass papers, admits that neither the UK nor Europe are doing it right. On the other hand, he dismisses the criticism that biomass is predicated on producing CO2 now in exchange for sequestration later:

The New Yorker article naively views carbon emissions from biomass burning as a “giant loophole” in climate protection protocols, dismissing the regenerative possibilities on the grounds that it will take decades for forest regrowth to recoup the emitted carbon—but a few decades’ delay is in reality not a serious issue in comparison to the nearly irreversible climate disruption caused by the burning of fossil fuels.

But CO2 is CO2 whether it is produced by burning wood or burning coal, and neither is any more “irreversible” than the other.  Further, burning coal and planting trees are not mutually exclusive activities. We have the following options:

The second set of options is ignored or dismissed by biomass advocates. They argue that fossil fuels represent permanently sequestered carbon. While trees also represent sequestered carbon, they are not permanent carbon sinks. Eventually, they will return their carbon to the atmosphere because of forest fires or through decay. Burning fossil fuels, then, adds “new” carbon to the mix, while burning trees does not.

This argument overlooks the fact that trees can be harvested and used for things other than firewood. Homes, furniture, books, and paper products are relatively permanent carbon sinks. Also, biomass power frontloads the carbon hit. Carbon sinks are lost immediately and carbon emissions over and above what would have been produced had fossil fuels been burned instead are produced immediately. If the IPCC’s climate scientists are correct, carbon must be sequestered now, and carbon emissions must be reduced now.

Finally, even their advocates see biomass powerplants as only stopgaps – alternatives to be used just until better solutions are available. But this stopgap comes with an upfront, long-term cost that is higher than using fossil fuels until the better solutions are available. Moreover, once cemented in place with government subsidies, biomass will be as hard to eradicate as corn-based ethanol has proven to be despite its continuing environmental damage.

The UK and the EU have created a new special-interest group that has a vested interest in keeping subsidies flowing and favorable regulations in place. As Kevin D. Williamson once observed, when government does stupid, it does immortally stupid.

Instead of subsidizing biomass plants and exempting them from carbon taxes, the UK and EU should consider creating a level playing field by eliminating all energy subsidies – both monetary and regulatory – as a first step toward fundamental policy reform.

Level field, no favor is a pro-consumer, taxpayer-neutral approach to energy policy. Voluntary transactions between consenting adults within a rule-of-law framework can be expected to arrive at efficient solutions.

This article, Is Biomass “Green” Energy?, was originally published by the American Institute for Economic Research and appears here with permission. Please support their efforts.