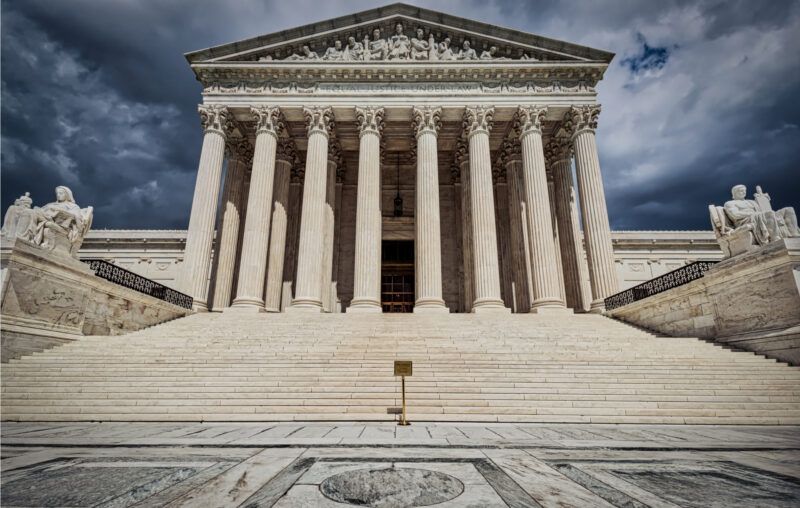 Epochal events often generate canonical Supreme Court cases. During the Korean War, President Harry Truman ordered his Secretary of Commerce to seize and operate a group of steel mills to ensure continued operations in the face of a strike. In Youngstown Sheet & Tube v. Sawyer, the Supreme Court held that Truman lacked authority to give that order, because Congress had never delegated him such power.

The decision has rightly been hailed as an essential invocation of the principle of limited government—in this case, that the President, at least domestically, has no greater authority than that which Congress chooses to grant. It remains the most important separation of powers decision of the last century. And since the separation of powers is an important structural protection for liberty, it is one of the most important liberty-protecting decisions the Court has handed down.

Last week, in NFIB v. OSHA, the Court struck down another action of a President in a national emergency. This time the emergency was natural rather than man-made—the Covid pandemic. And this time the President’s order did not take over businesses outright but instead mandated that they require their employees be vaccinated unless they mask and frequently test.

This case may turn out to be critically important for administrative law, with vital implications for the separation of powers. It potentially cabins the awesome authority of the modern administrative state to make impositions on our liberty in three separate ways: by circumscribing the deference that agencies get for their statutory interpretations, by forcing Congress to speak clearly if it wants to invest an agency with significant authority, and by requiring an administration to give the real rather than pretextual reasons for its administrative decision making. As with Youngstown, the decision was prompted by an emergency, but it is significant because it will apply a fortiori in more quotidian circumstances.

The biggest legal difference between Youngstown and the OSHA case was that, in the latter, the President’s agent—the Director of the Occupational Safety and Health Administration—could appeal to an existing statute when carrying out the President’s order. OSHA possesses the authority to issue standards “reasonably necessary or appropriate to provide safe or healthful employment.” It also has the extraordinary authority to issue emergency standards without going through the normal process of notice and comment, in which the affected parties have the opportunity to weigh in on regulations. But it can only do so “when employees are exposed to grave danger of new hazards,” and the “emergency standard is necessary to protect employees from such danger.”

In a per curiam opinion (the writing style suggested that the author was Chief Justice John Roberts), the Court held that the vaccine mandate exceeded the authority OSHA was given by the statute. There are several explicit and implicit reasons for this in the majority opinion, all of which have important implications for the future of administrative law, particularly because they build on rationales in other cases that the Roberts Court has decided.

The Limits of Deference

But recently the Court has carved out an exception to Chevron deference—the “major question” doctrine. If the question before the Court concerns important issues about the scope of state power, and not merely technical details, it is the Court’s prerogative to resolve without deference to the agency’s interpretation. This doctrine assures that government will no longer begin any debate on a central interpretive question with the thumb already on one side of the scale. It is thus a victory for due process. It will also help stabilize government by ensuring that interpretations of important issues will be decided by the judiciary, which is less susceptible to the vicissitudes of changing administrations.

While the decision did not explicitly say that the question of whether OSHA had the authority to address a public health crisis as an occupational crisis is “major,” it was implicit, because the Court did not give any deference to the agency’s interpretation or even mention Chevron.

Another important holding of this case was its declaration that “Congress must speak clearly when authorizing an agency to exercise powers of vast economic and political significance.” Some, including Justice Gorsuch in his concurrence in this case, have referred to this proposition as “the major question doctrine.” But to distinguish it from the Court’s limitation on Chevron deference, this clear-statement rule might instead be called “the major powers doctrine.”

Both are separation of powers doctrines. The major question doctrine prioritizes the judiciary over the executive: it is for the judiciary, not the agency to engage in the central questions of legislative meaning. The “major powers” doctrine, on the other hand, prioritizes Congress over the judiciary. It is for Congress to give agencies major powers, not for the Court to infer those powers from an unclear text.

The major powers doctrine also reflects the separation of powers by policing congressional delegations to executive agencies. The Constitution entrusts the authority to make rules, like the one at issue in this case, to Congress alone. Congress cannot avoid this responsibility by sloughing off authority to the executive.

But it is hard for the judiciary to police this constitutional requirement because the executive has the power to execute the law, filling in the details of Congressional directives. Where does the power to delegate end and the power to fill in the details begin? The lack of a clear standard makes the judiciary hesitant to enforce the line directly. Thus, rather than striking down substantial delegations of powers outright, the Court’s major powers doctrine requires Congress to speak clearly in any statute that gives substantial power to an agency. This assures that Congress can at least be held accountable for that decision by the voters.

It is possible to criticize the major powers doctrine as not being consistent with textualism. It does, after all, put its own thumb on the scale of statutory interpretation by adding an additional hurdle that must be cleared before the Court determines that an agency has indeed received a major power. But it can be justified by the need to implement the Constitution’s separation of powers and the difficulty of policing the delegation doctrine. We see similar “clear statement” doctrines that substitute for outright judicial invalidation in other parts of constitutional law where the standards for review are vague. For instance, rather than determining whether conditions on federal spending are actually related to the “general welfare,” the Court instead protects state autonomy by requiring that these conditions be clearly stated.

A modern problem for administrative law is that Congress has delegated so much power to agencies that there is almost always some authority available in the government that can be repurposed for a different end than the one Congress imagined. How is the Court to ensure that the government is deliberating administratively for the ends Congress intended and not acting first and looking for justifications later? Here, the Court does not outright say this vaccine mandate for business was just a pretext for vaccinating more people. It does heavily imply it, though, by reminding us of President Biden’s announcement of the mandate, in which he called it “a new plan to require more Americans to be vaccinated.”

In Department of Commerce v. New York, Chief Justice Roberts, writing for himself and Justices Ginsburg, Breyer, Sotomayor, and Kagan, struck down the Trump administration’s decision to add a question about citizenship to the census form on the grounds that the reasons given for adding it were pretextual. The Secretary of the Commerce, who had authority over the Census Bureau, appeared to be motivated by something else, perhaps hostility to undocumented aliens.

Pretextual justifications strike at the heart of administrative law. As the Court said in the census case, “the reasoned explanation requirement of administrative law is meant to ensure that agencies offer genuine justifications for important decisions, reasons that can be scrutinized by courts and the interested public.” The OSHA case is another reminder that the Court may now police the deliberations of the administrative state to ferret out pretext. And forcing agencies to give the real reasons for which they are acting allows the voting public to more accurately judge those actions and hold the executive accountable.

Policing pretext also has implications for the unitary executive doctrine. The Roberts Court has been clear that the President controls the executive branch, but limitations on pretextual justifications of agency actions ensure that he must still use his agents for the reasons Congress established them, not for his other policy goals.

Gorsuch’s Concurrence and the Future

One striking legacy of Youngstown is that it was not Justice Black’s majority opinion that has had the most influence but Justice Robert Jackson’s concurrence. Indeed, Jackson’s concurrence may be the most important concurrence in the history of the Supreme Court. Jackson softened the hard-edged Black opinion, suggesting that there were times the President might be able to act in emergency situations so long as it was not contrary to the expressed will of Congress.

In the OSHA case, Justice Gorsuch wrote a concurrence potentially as important as Jackson’s. He argued that even if Congress had made it clear that OSHA could regulate any public health danger it deemed necessary to protect workplace health, he still would have invalidated the statute because Congress had not provided sufficiently clear standards for exercising that substantial power. Thus, he would have revived the nondelegation doctrine and required Congress to provide much clearer direction on the way power was to be exercised beyond telling agencies what power was to be exercised. If his view were accepted, many delegations which clearly give great and largely standardless authority to agencies would have to be reconsidered. Of course, we should not necessarily think this concurrence will become the law, as only Justices Clarence Thomas and Samuel Alito joined it.

But even if the majority opinion, and not the concurrence, is the primary indicator for the future, the Roberts Court has served notice that administrative law may look different going forward. The Court rather than the agency will interpret major questions in statutes. Congress will need to be pellucid about what major powers it chooses to delegate. And the administration will have to offer up the real reasons for administrative actions or risk being second-guessed by the judiciary. Though they will not eliminate it, all of these new doctrines combine to tame the modern administrative state.

This article, Jabbing the Administrative State, was originally published by the American Institute for Economic Research and appears here with permission. Please support their efforts.